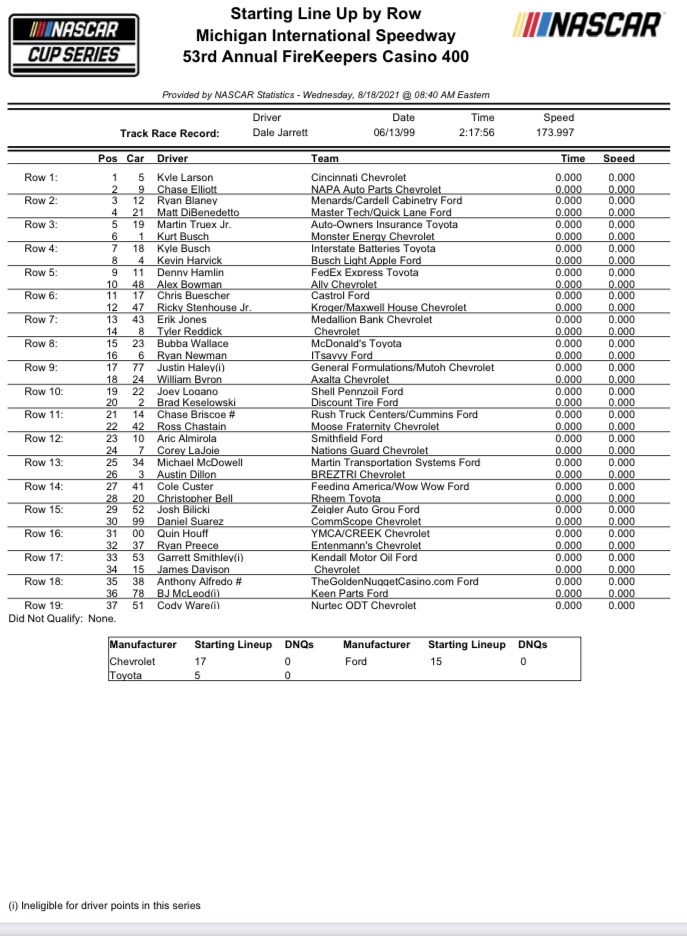 We know what he can do at Michigan’s sister track in Fontana, but he’s also had three wins at Michigan too. Now, you’re giving him a HMS car too.

He swept Michigan last year and won the August race the year prior. Harvick, has four wins in his last five Michigan tries including five top twos in his last six in the Irish Hills overall.

He has two runner-ups in his last three Michigan tries including four top eights in his last five there overall.

We’re to the second to last race of the regular season and it should be a good one. Sunday’s race at the Michigan International Speedway should be a battle of Joe Gibbs Racing vs. Hendrick Motorsports. JGR has seen Denny Hamlin finish runner-up in two of his last three Michigan starts with four top eights in his last five there overall. Kyle Busch has six straight top sixes in the Irish Hills while Martin Truex Jr. has four straight top five results including six top sixes in his last eight overall.

But, HMS may have something to say about it.

Kyle Larson is in the HMS camp now and has three Michigan wins overall. Chase Elliott has nine top 10 finishes in 10 Michigan tries including three runner-ups. William Byron and Alex Bowman should be vastly improved now too.

While JGR has shown more speed than HMS over the last month, is this is the time HMS kicks it back into gear?

You also can’t sleep on Kevin Harvick. He swept Michigan last year and won the August race the year prior. Harvick, has four wins in his last five Michigan tries including five top twos in his last six in the Irish Hills overall.

The winner should come from these nine drivers. That’s if Team Penske doesn’t have something to say about it too.

Joey Logano won the spring race in 2019 and has five top 10 finishes in his last six Michigan starts including 14 in his last 16 there overall.

Brad Keselowski has never won on his homestate track before but he’s been close. Keselowski, has four top six finishes in his last six tries.

Ryan Blaney has four top 10’s in his last six Michigan starts too.

See where this is going to be interesting. That’s eight drivers between the JGR and HMS camps but throw in the Penske trio and Harvick and you get 12 total drivers there.

Also, Michigan this weekend is key for a lot of drivers because it’s honestly the final chance to make your own success. What I mean by that is, Daytona is a wildcard. Want to control your own destiny? You better do so in Michigan on Sunday.

We know Stage points are going to be key for Hamlin, Larson, Tyler Reddick and Austin Dillon. It’s going to be key for the drivers on the playoff bubble as well as key for guys wanting to win the race. See, since the stage era began in 2017, all six Michigan races were won by a driver getting stage points in the first stage. Four of the six opening stages saw the eventual race winner come home in the top three. In 2019, the last year of a normal race distance here, the drivers that won the race ended up giving up Stage points in the second stage and positioning themselves for the win in the end.

With just a handful of drivers now on the playoff bubble needing points, they may elect for stage points instead of the race win which would set up nicely for some favorites to pit at the end of the second stage and be up front for the final push at a win.

That’s why guys like the ones above may shine. They can be aggressive and go for the win.