Briscoe overcomes early incident to finish 3rd in Daytona 500, how he went from sleeping on couches to Daytona top 5

DAYTONA BEACH, Fla — Chase Briscoe’s started the Daytona 500 off on the wrong foot just like his NASCAR journey started off sleeping on couches. More to that in a bit.

For the race, he had to drop to the rear before the start of Sunday’s sold out race due to multiple inspection failures. He lost his engineer too as a result who was ejected.

Then, on Lap 40, he was collected in the opening lap caution when Kaz Grala’s wheel literally came off his No. 50 Chevrolet. Briscoe, slowed to avoid it but Austin Cindric couldn’t get slowed up enough to avoid him.

Cindric, accidentally spun Briscoe in Turn 2 as a result.

He would ride mid pack on back for the first half of the race finishing 23rd and 21st respectively in the two stages. But, there he was in the end.

Briscoe, avoided carnage and restarted in the top five. He tried hard to get up to push Brad Keselowski but just couldn’t get there. Cindric, had his teammate Ryan Blaney giving him drafting help below and Bubba Wallace pushing the three behind. Without being able to close quick enough, Briscoe had to settle for third in his No. 14 Ford.

Still, this is a phenomenal story for a driver who started off working so hard to make it in this sport got a top five in his second career Daytona 500 attempt.

“You know my story, sleeping on couches and volunteering six, seven years ago, and now to have a chance to win the Daytona 500 at the end and finish third and start the year off with these Mahindra Tractors folks and HighPoint.com, all the people that get us to the racetrack. We want to be a playoff contender this year, and having a good run here is a good start,” he said.

“Wish we could have had one more lap. You never know what could have happened, but yeah, super cool to finish third and really cool for one of my best friends to win the race.”

I’ve always likened the analogy that the ball will always find the ones who hustle the hardest. Well, in this case, the ride found the driver that put himself out there the most.

It’s an emotional march through the journey of his young career. One story that’s already made for Hollywood.

You go back to 2013. February 1 to be exact. That’s the date Briscoe, shared that he packed up and headed south with a NASCAR dream. Since a majority of NASCAR’s teams reside in North Carolina, Briscoe felt it was best he pave his own path by taking a risk and moving down to the Tar Heel state alone.

So, he packed up his things, put $150 cash in his pocket and backed out of his southern Indiana driveway in hopes of being where he was at today. If only the path was that easy though.

“A lot of emotions that kind of hit when I saw that,” Briscoe said during his Daytona 500 Media Day availability last year when he saw via his Facebook that Monday was the anniversary of the day that he officially moved to North Carolina to start his dream. “I remember that day so excited to kind of start a new journey but also so nervous because I didn’t really know what I was getting into. I was fresh out of high school.”

Briscoe, said that his mom had always done his laundry up until that point of his life in 2013 and that she had to give him a crash course on how he would have to now do so himself. Also, he’d not ever had his own credit or debit card before either – hence the cash he was taking with him. He was just taking a full dive from the high dive into adulthood and moving away in hopes of chasing a NASCAR dream.

So, off he went to North Carolina knowing only two people in the entire state that he was embarking on.

Briscoe, worked hard and went to every teams shop trying to find his way in somehow. He was looking for a job just to work inside one of those facilities with a goal to eventually becoming a driver for them. After two years of nothing really ever turning up, he decided to come back home to Indiana and do something else. It was time to move on from his dream. This Indiana boy just wanted to follow his idols but the doors weren’t opening in his favor.

So, Briscoe returned to the Hoosier State as he was going to run his Midget on that upcoming weekend then head back to North Carolina to gather his things and come back to find a new career.

That’s when this whole story takes a turn. This is the first turn in what would shape who Briscoe is today.

“Literally, the day I was driving home, I remember I was in Kentucky,” Briscoe continued. I called my mom. I was in tears. I told her I was moving back home. I was over it. I had been down there for two years and didn’t have anything. I told her I was going to run a midget that weekend then on Monday was going to drive down and get my stuff and come back.

“2 hours later, I got a call from an ARCA team asking if I was interested in coming to do a test. That was the Cunningham Motorsports team. I went there that following Monday. I had been sleeping on couches for two years at that point. Just trying to hanging out in trying to be the first one to be there and the last one to leave. I volunteered for a full 9-10 months before I even got in a race car and I don’t know why but somehow they thought I was a missing piece for them.”

The Cunningham Motorsports opportunity led to this ride today, but again, that’s not where this story ends. Briscoe, made his ARCA debut in his homestate at the Lucas Oil Raceway in 2015. He finished 10th that day. He’d race another race later on in the season, again in Indiana, Salem this time. He finished fifth.

Those results produced a full time opportunity in 2016. It turned into a six win season en route to a championship. That then got him an opportunity in 2017 which took him to the Truck Series with Brad Keselowski Racing. That time in ARCA led him to a Ford development deal and he was placed with BKR. He won the season finale at the Homestead-Miami Speedway that year and finished sixth in the final standings.

The door though almost closed again though. BKR shut down at seasons end unexpectedly and Briscoe was left searching in a same situation where he didn’t know what he was going to do. Ford saw the talent still and kept him for another year. He would now though step up to the Xfinity Series on a part time basis with Roush Fenway Racing. His season wasn’t going to planned, but he credits his win on the ROVAL in Charlotte that Fall as the main thing that led him to a full time opportunity a year later with Stewart-Haas Racing.

He felt like being part time in NXS was going to end his deal with Ford. That win helped secure another year though.

See, no top five finishes in his first 13 races appeared that the stage was too big, too soon. Briscoe knew it wasn’t but just needed some luck. The luck finally happened on the ROVAL and the next door in which was almost closed was slammed back open.

2019 with SHR was going well and he even found out in October that he’d be retained for the next season. Then, funding fell short and a month after that, his future was in doubt again.

In January of last year, literally three days before the deadline for having a ride or not for 2020, High Point stepped up their funding and Briscoe returned for a third year in NXS competition. The goals were high and he fulfilled them. 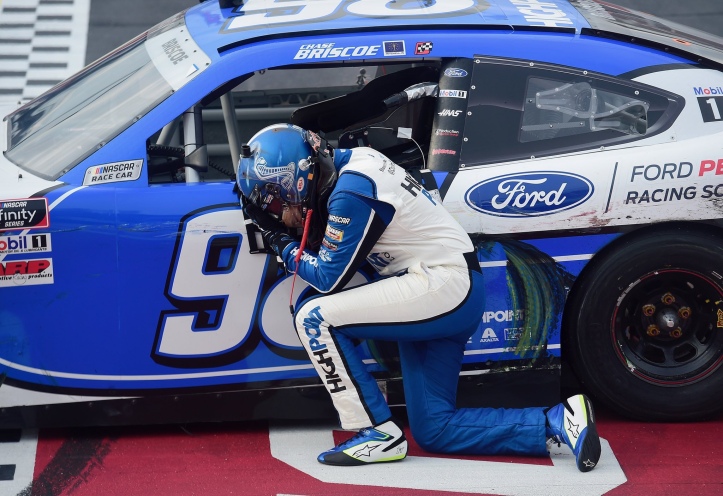 Briscoe, won nine times and marched all the way to the Championship 4. In the middle of that came a pandemic. It also caused heartbreak to he and his wife as they got pregnant but unfortunately lost the baby. He’d win at Darlington a few days later in emotional fashion.

Now, after nearing everything that could go wrong did, Briscoe nabs a top five with his favorite boyhood team. Remember, I said he was an Indiana native, right?

Well, Briscoe’s favorite driver was Tony Stewart. They had similar on track backgrounds. USAC stars from Indiana hoping to make it in the NASCAR world.

Stewart’s path was forged into a Hall of Famer. Briscoe, will now not only drive for Stewart in the Cup Series but will do so in his old car (No. 14  Ford).