Elliott comes up just short of repeat bid in Cup championship Sunday in Phoenix, his thoughts

AVONDALE, AZ — The fact that Chase Elliott was even in a position to earn his second straight NASCAR Cup Series championship trophy was remarkable enough. He had no wins on ovals this year. The only two times he reached victory lane were on road courses with the last one being on the Fourth of July at Road America. He finished 12th or worse in five of the nine playoff races.

Still, he did enough to get to Round of 8 for the fourth straight year and for a second consecutive, he was in the Championship 4.

Elliott, can hang his head high in the sense that they marched this way.

He was there in the hunt all day finishing third and second respectively in the two stages, but he just lacked the pace that it took to seriously contend for a championship. Kyle Larson had better pit stops. Joe Gibbs Racing had better long run pace. Elliott, was just stuck in the middle.

“Just honestly really proud of our effort,” Elliott said. “I thought we had a really good car. Honestly I thought all four guys, to Martin’s point, were good. I felt like we all kind of had our moments really throughout the day. You get a caution with 20 laps to go, it’s going to be very difficult to run down and pass the guy that jumps out front in the restart. But yeah, proud of our team. Felt like we had a nice game plan coming into the week. Felt like our car did a lot of the things we wanted it to do. No major mistakes, just needed to be a little better in those first few sequences of restarts and pit stops there at the end.”

Defending a NASCAR Cup Series championship is no easy feat. Since the turn of the century, only Jimmie Johnson’s reign from 2006 through 2010 is the only time someone defended his crown. In fact, since 1995, just Johnson and Jeff Gordon accomplished this feat.

Just three times in the previous six years has the defending Cup champion advanced back to the Championship 4 the following season. Elliott is now the fourth. The last two prior were bounced in the Round of 8 and Round of 12 respectively.

It’s just so hard to repeat as a champion in NASCAR. That’s why Elliott shouldn’t hold his head too low that he didn’t win the championship for a second straight year on Sunday.

But, in saying that, with a title last year and really getting over the hump, would 2021 had been labeled a failure if he didn’t at the very minimum have a shot at a championship this Sunday in Phoenix?

The thing is, his path to the championship has been very similar in each of the last two years. He came into the playoffs this year with a very similar regular season to the one he had in his championship winning season of a year ago.

Same for the playoff races too. 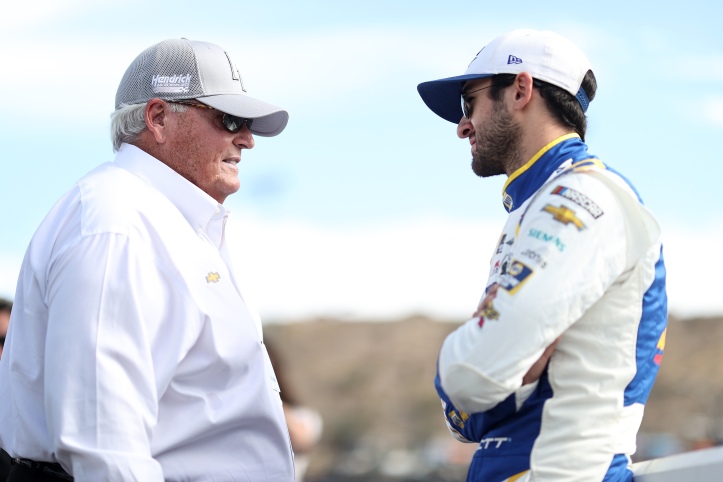 The ROVAL is the glaring difference as the others are very similar.

So, what can he take away from that? Is there anything to learn from the last two years that he can take over to 2022 despite having a brand new race car?

Are Championship 4’s the new norm now for them? Is this the standard?

“Yeah. I mean, yeah. Some of those really tough days I thought prepared us to be able to come here and have a shot to win last year. Those tough losses teach you good lessons. I felt like our team came into the last couple years here with a really good mindset and were mentally strong enough to go and compete for the win. That’s really all you can ask for.

While he was fourth out of four on Sunday and fifth in the race, Elliott still scored his sixth top seven in the last nine races at Phoenix with his last four being seventh, first, fifth and fifth respectively.