LONG BEACH, Calif — Cadillac’s thought that they had an advantage on street course races this season. The bumpy terrain with tight confines suit them well. Well, they backed that up in Long Beach this weekend.

Felipe Nasr and Pipo Derani were quickest in practice. They were quickest in qualifying. They backed that up with ushering in Cadillac with their fourth straight win on the 1.968-mile street circuit.

It was their third win of the season and sixth podium overall in 2021 including fourth straight and six in the last seven for their No. 31 Cadillac.

It was a huge moment for their championship hopes with the No. 10 Acura driven by Filipe Albuquerque and Ricky Taylor having a rough day in fourth place. It was just their second time that they didn’t finish on the podium in the last seven races and moves their lead down to 19 heading to Petit Le Mans in November for the season finale.

The other Acura in the No. 60 Meyer Shank Racing entry was clipped by the No. 3 Corvette late in the race in Turn 1 and they got into the wall as a result. The damage caused them to have to pit and limp home sixth in class and 25th overall in the 26 car field. This was their fourth straight race they failed to score a podium and sixth in the last eight tries.

The other Cadillac from Chip Ganassi Racing finished runner-up for their fourth straight podium, three of which being runner-ups. Renger van der Zande and Kevin Magnussen won in Belle Isle and finished in reverse in Long Beach to the Whelen Engineering Racing entry. 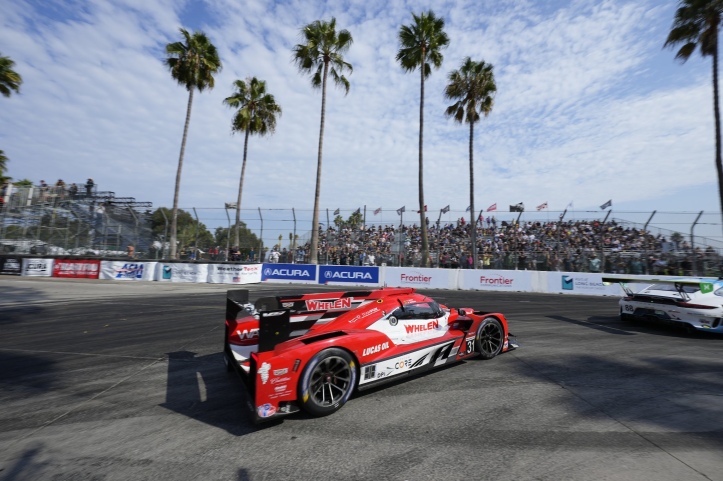 The two teams had contact early when Nasr and Magnussen battled for the top spot at the drop of the green. Magnussen found the lead but Nasr fought back and Magnussen missed the entry at Turn 1 and scrapped the tire barrier.

That caused some damage and initiated the first caution. They’d never get the damage fixed which is why they came home runner-up.

The No. 5 Mustang Sampling/JDC-Miller Motorsports car finished third for their first podium since Sebring while the No. 55 Mazda earned a fifth place result.

In GT Le Mans it was another Paul Miller Racing 1-2 this time though, Nick Tandy and Tommy Milner taking the No. 4 Corvette to victory over their teammates in the No. 3 Corvette, Antonio Garcia and Jordan Taylor.

Milner, got by Taylor near the 50 minute mark of the event and never looked back en route to their third win of the season. This was their sixth podium in the last seven.

The No. 3 entry now has four wins and four runner-ups for eight podiums in nine tries. The only non podium was a fourth at Sebring.

In GTD, the No. 1 Paul Miller Racing Lamborghini Huracan won with Bryan Sellers and Madison Snow piloting the car to the win.