Andretti confirms Hunter-Reay’s exit at seasons end, where things look for his potential rides for 2022

INDIANAPOLIS — When Ryan Hunter-Reay signed a one year contract to remain at Andretti Autosport for the 2021 NTT IndyCar Series season, we all figured that this would probably be the last for the former series champion with that team. With speculation all season long about Hunter-Reay’s future status with the team, the rumors grew louder and louder as the weeks have gone on that Romain Grosjean would be in the No. 28 Honda for 2022 and Hunter-Reay would be out.

While Grosjean has denied any contract being signed with Andretti and neither side willing to comment on the future, Andretti did announced on Tuesday that Hunter-Reay definitely won’t be back next season. The 2021 season will be his 12th and final with the organization.

What started as 3 races grew to over a decade of success. Over the next 2 weeks, @RyanHunterReay will turn his last laps as our #INDYCAR teammate. Thank you, RHR, for 15 wins, an Indy 500 victory & Series title. Always a champion, always a friend.

Hunter-Reay joined Andretti for the 2010 season after spending his first couple of years in the sport with Rahal/Letterman/Lanigan Racing, AJ Foyt Enterprises and Vision Racing.

The first year with Andretti was a breakout year for him. He was runner-up in his first start in Brazil and won his fourth start on the streets of Long Beach. Two years later, he was a champion. Two years after that, he won the Indy 500.

With just one podium in his last 32 starts and being winless in his last 45 tries, Andretti felt like it was best to move on. Hunter-Reay agreed.

“Sometimes you need to shake it up,” he said the week of the race at Nashville. “Sometimes there needs to be change, and I agree with that. Michael said that, as well. The team has to find a stride, and we’ll see what that entails.

“I’ve had a great time there with them, and we’ll see. Maybe it continues, maybe it doesn’t, but it’s not something that — I put the most pressure on myself, and within our 28 team we are there to win races, and when we’re not getting that done, we know we’re not getting the job done and we’ve got to work harder and we’ve got to find why and when and where. We need to be to make it happen.”

So, where does RHR land now? I don’t sense he’s ready to be done.

For someone with his credentials, almost every door should be opened. It’s not every day that a series champion, let alone an Indy 500 champion, hit the open market. But, for a sport that’s generally getting younger and younger, where does a 40 year old land?

He says he has a couple of options for next year but to what extent he doesn’t know yet.

“I’ve got some options that I’m working on,” Hunter-Reay said last month regarding his options next year “We’ll see. We’re kind of taking it day by day here to see where things kind of shake out.

“Obviously I’ve had a tremendous time at Andretti Autosport. I’ve been there, what, 12 years, I think; have been with DHL for 11. Won a lot of races together, championship, Indy 500 and things like that.

“I think that I’ll be in an INDYCAR for sure at some point. Again, I don’t know to what extent that is or what options there are. We’re working on those right now. They’re in discussions. They’re constantly moving. Things are moving and shaking, and, yeah, we’ll see.

“Depends on how enticing and attractive one versus the other may be. Yeah, I’ve got to make some decisions on that side and also have to continue the communication on all fronts.

“Got some different scenarios and different options for next year, but nothing to really talk about yet that’s definitive.”

A return to either AJ Foyt or RLL make the most logical sense. Foyt could have the No. 4 Chevrolet open but that ride would cost money and I don’t think Hunter-Reay would bring the right budget. A split in the No. 14 Chevrolet would make the most sense if they could make it work.

RLL would be intriguing if Takuma Sato doesn’t return. See, we know Graham Rahal is back and by all accounts Jack Harvey is joining them. The word on the street is, if Honda foots the bill, Sato will remain in the No. 30 entry for RLL and Harvey goes to the funded 45 car. If Sato doesn’t return, the Harvey goes to the 30 and the 45 car is open for the taking. That’s where Hunter-Reay would be a great fit. This is all predicated on Sato and if Oliver Askew, Santino Ferrucci, Christian Lundgaard or anyone else slides in there instead.

Ed Carpenter Racing could have an opening in the No. 20 Chevrolet shared seat with Ed Carpenter so long as Conor Daly and US Air Force don’t return. It’s sort of a return since ECR is basically a spawn of the old Vision Racing team.

Carpenter is very fond of Hunter-Reay and having RHR in the road/street courses and the Indy 500 is a very intriguing fit for both sides. The only issue is, Hunter-Reay wouldn’t be full time. 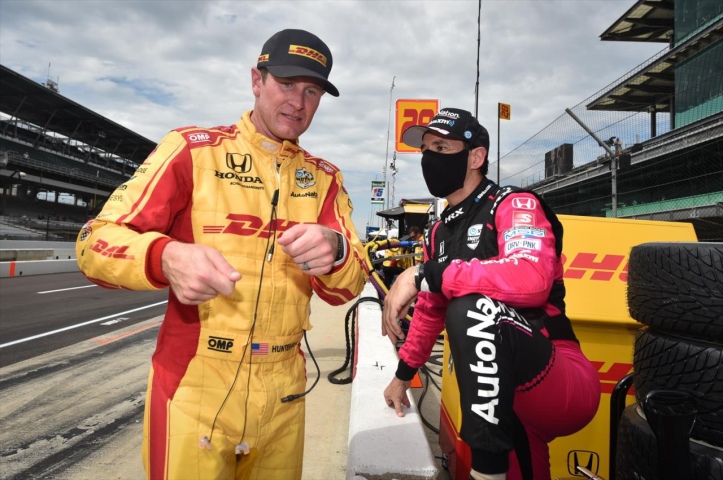 The only other top fit would be Meyer Shank Racing and team with Helio Castroneves in the 60 car that Harvey is leaving. But, all signs are pointing to Simon Pagenaud going there anyhow. If Pagenaud doesn’t, then Hunter-Reay would be an easy fit since they’re already aligned with Andretti.

Team Penske would like to remain a four car team with Pagenaud but if Pagenaud doesn’t return, they’ll scale back to three cars for 2022.

If RHR is going to hang in INDYCAR, it’s going to come down to RLL, Foyt, ECR or MSR.