PORTLAND, Ore — Colton Herta rolled the dice and qualified in the Fast Six on the Firestone primary tires. Pato O’Ward said his No. 5 Chevrolet was horrendous on the Firestone alternates. He didn’t even make it to the Fast Six as a result. None of the four Team Penske drivers advance out of the first round.

Saturday was a very good day for Chip Ganassi Racing, most notably Alex Palou. The Spaniard was quickest in practice earlier on in the morning and the second year driver backed that up with his first career NTT IndyCar Series pole a few hours later.

Palou, circled the 1.964-mile Portland International Raceway track with a time of 58.7701-seconds in his No. 10 Honda en route to a clutch top starting spot. While I get some may point to Texas as him rolling off from the pole, that races’ starting lineup was determined by points. This was his first pole earned on speed and boy did it ever come at a good time.

The Ganassi driver entered the west coast swing reeling. He qualified third on the streets of Nashville to kick off the action for the month of August, but due to a six spot grid penalty for an engine change, he would instead come from ninth. He’d only finish seventh as a result. A week later, Palou was running fourth on the Indy road course before another blown engine. He’d finish 27th. In turn, that cost him nine spots on the grid in Gateway and while coming up through the field there, he was collected in a crash and would finish 20th.

Instead of having a 40+ point advantage in points, he came to the final three races 10 points behind. That’s why Saturday was so clutch for him to top the timing charts when he did and score a bonus point in the process.

Alexander Rossi (58.8573-seconds) will start second in his No. 27 Honda for his ninth straight top 10 starting spot. HE had four straight races of 11th or worse prior.

Palou’s teammate Scott Dixon starts third in his No. 9 Honda after a lap of 58.8673-seconds while Felix Rosenqvist (58.9505-seconds) will come from alongside his former teammate in fourth. 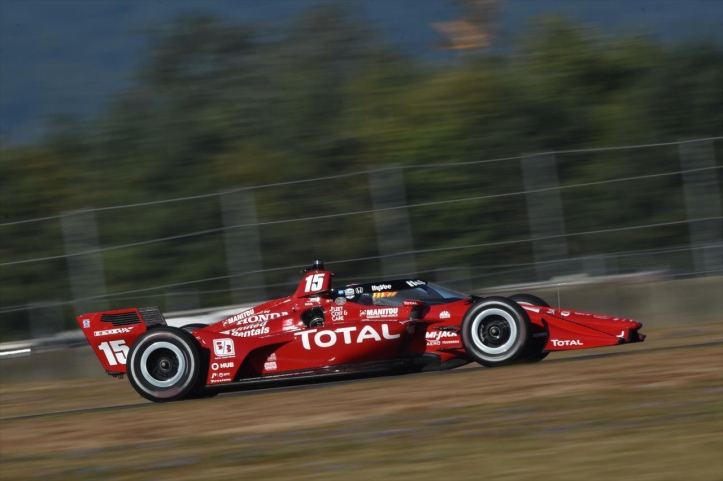 For Rahal, this was his best starting spot of the season. We’ve all wondered that if he had a good qualifying effort, where would he finish? He’s a top 10 machine, but more times than not, he’s having to come from starting spots outside of there. He’s had six top 10’s in 14 races this season in terms of qualifying performances, but five of them were eighth or worse. Now, he’s coming from the top five.

His teammate Oliver Askew qualified ninth in his first appearance in the No. 45 Honda. The other driver for them in Takuma Sato will start last after a six spot grid penalty for an engine change in his No. 30 Honda. Sato, blew an engine in practice this morning. The last time here, he crossed the finish line first. Can he go from last to first on Sunday?

Herta, has now had a top 10 starting spot in all 14 races run this season including nine straight in the top six.

The size of the track (1.964-miles) created some havoc in the first couple of rounds of qualifying in the sense that a shorter road course means less real estate for a clean lap. That caused a lot of logjams and a penalty for Romain Grosjean which saw his 13th place qualifying effort go to 21st.

Pato O’Ward could use the points but Felix Rosenqvist could use the momentum. Rosenqvist, knocked his Arrow McLaren SP teammate out of the Fast Six in the closing seconds which could come back to hurt them. Rosenqvist, would go on to qualify for fourth which would be a spot that they could use for O’Ward in the sense that he’s the points leader and the top driver chasing him in the standings earned the pole.

Scott Dixon also qualified third, meaning that O’Ward could have been right next to or one row behind Dixon. Now, he’s in Row 3 and right in the middle of potential carnage with the first corner always creating havoc at Portland.

O’Ward though said his car was horrendous on Reds so he didn’t feel like he had much of a shot at the pole anyhow. Still, this was his fourth straight top 10 starting spot but he’s only had a pair of top five qualifying efforts in the last seven races.

This effort on Saturday also goes to show that what they learned here over the summer is paying off. Both drivers have been saying loudly that the Portland test was the turning point of their season. They had a really good test and learned a lot to help both cars.

Rosenqvist, had no top 10 starts on the season prior to the test and now after, he’s been inside the top 10 in three of the four including two of which being in the top five.

While Honda’s had the pace, AMSP had the only two bowtie affiliated cars in the top 10 in qualifying.

Josef Newgarden couldn’t afford to have the qualifying effort that he had. He was only 18th in his No. 2 Chevrolet. The problem is, none of his Team Penske teammates were any good either. Will Power led the way for the Penske camp but he was only 14th. His last two starts prior were on the front row.

Scott McLaughlin was just 15th which was his eighth time he’s failed to get out of the first round. He’s been 15th or worse in seven of the last nine races.

Newgarden had a string of three straight poles and nine top 10’s in his first 10 races of the season, but has only been 12th, 14th, 3rd and 18th now since.

Simon Pagenaud was 26th but by virtue of grid penalties, will advance up to 22nd.

Saturday morning looked like Meyer Shank Racing would have something for the pole later on in the day. Helio Castroneves was P2 with his teammate Jack Harvey in third. For qualifying, neither made it out of the opening round.

Castroneves, will roll off 17th on Sunday while Harvey will come from 20th. The thing is, MSR hasn’t had qualifying pace lately. After having four top six starting spots in the first five races of the season, Harvey has been 18th or worse in six of the last nine.

Honda took 5 of the top 6 spots into the Firestone Fast Six and put 8 cars in the top 10 of the starting lineup. They look to have the pace that it takes for the win on Sunday.