TRACK COMPARISONS/WHO’S BEEN GOOD ON THEM

While a road course is a road course, Portland is most comparable though to Barber, Road America, IMS (road course), Mid-Ohio and Laguna Seca. Toronto, Long Beach and St. Pete are street circuits run on city streets. These other road courses are all natural free flowing terrain with some elevation changes. If you’re good at one, you’re more than likely good at the others.

Expect the unexpected for Sunday’s race though. Portland differs in the sense Turn 1 is crazy, the track layout evens things up and pit strategy in turn is key.

This race weekend has produced some jumbled up box scores over the years and I would think this year’s edition will be no different because of those reasons. .

The NTT IndyCar Series is already one of the most, if not THE most, talented fields from top to bottom in the world of motorsports. That in turn has forced drivers to ramp up the aggression level to depths we’ve never seen before.

Sebastien Bourdais says that’s kind of the name of the game anymore here for a couple of reasons.

“When you have a monotype series for the most part with two engines that are very closely matched and they’re very high density, you’re going to see very, very high aggression on starts and restarts because unfortunately everybody knows that this is when things are happening, and if you are looking for positions, well, you’re not going to have that many chances. That drives the aggression level up,” said the AJ Foyt Racing driver.

“When the gaps are as tight as they are, you have to use pretty much every opening that you see, even if it’s kind of a long shot and a risky move.

“Yeah, there’s definitely a lot of guys that feel a huge urgency to make things happen right away, because we all know how hard it is to make it happen later on.”

He also said that sometimes the risks are just part of the situations going on at the time and that with more cars this year too, more cars lead to more passing opportunities which lead to more chances are carnage as a result.

“I think obviously sometimes the amount of risks that are taken is not directly related to the outcome of the situation,” Bourdais continued. “Sometimes you just get lucky and things kind of sort itself out. There’s a little bit of contact, but all the cars keep running. In Gateway’s case for sure it’s a very unforgiving track where as soon as there is any kind of contact, it ends pretty badly for most parties involved.

“Yeah, it is kind of the nature of the track, but yeah, I think we also have had deeper fields with more cars, which obviously also increases the probability of getting incidents on track.” 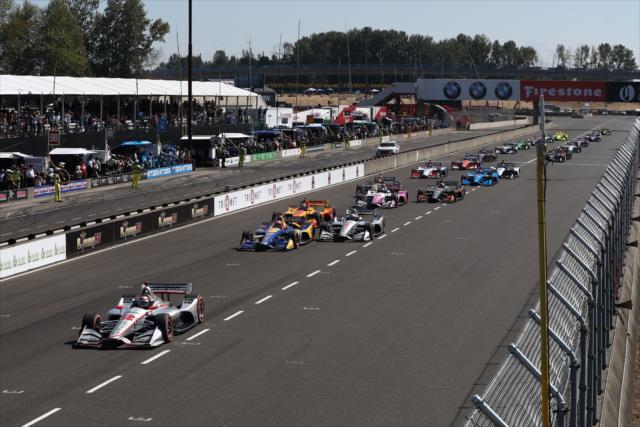 In turn, that could make the start of Sunday’s race a wild one. See, the first corner at Portland is a treacherous as they come. The cars are already jumbled up for the start. Then, you get a wide front stretch that allows you to go several cars deep before slowing down into a tight corner.

With aggression already up, plus an invitation due to a lot of real estate available to make some passes once the green flag drops, won’t we see some carnage in Turn 1 on Lap 1? I mean 27 cars will try to all fit through that one corner on Sunday.

“Be on pole, brake as late as you can and get away. That’s the easiest way to go about it,” Bourdais said of the first corner on Sunday.

“But yeah, as soon as you start second, third row and back, anything can happen. It’s obviously not as bad as Cleveland used to be, but it’s still awfully inviting to go one up on the inside, and then next thing you know you’re five or six wide going into Turn 1 with an impossible corner to make. Yeah, hopefully everybody keeps his head, but yeah, we’ve seen time and time again how inviting that corner is and the kind of chaos that can be led from those kind of aggression levels, which we’ve definitely not been shy of this year.

“It is very easy to just get sucked into the moment. It’s one of those where if you get a run, you tend of kind of forget that there’s already another three guys that are side by side going for it, as well, and unfortunately at Portland going in that chicane, you’re all going to meet at the exact same inch point between 1 and 2 if not at the apex of 1. Yeah, that definitely puts on a scenario that ends up in tears with cars torn up more often than not.”

There’s been a first lap caution almost every time we’ve been here. Last year saw the leaders jumbled up. There was one in 2019 too with four cars. There was a five car crash in Turn 1, Lap 1 of 2018. More times than not when CART/Champ Car came to the Pacific Northwest track, the same corner produced opening lap cautions.

That’s why starting spot matters here in terms of who wins.

That means we can really break this down to the top five starters for the win on Sunday afternoon.

Once we get through the first turn, the next thing to watch is strategy. This race is nine miles longer than the last two which means we could get a pretty straight forward three stop strategy race. But, depending on how cautions fall, you may be able to have varying strategies due to being able to save some fuel as well.

“Yeah, I mean, this race can obviously be a race strategy that can be quite interesting,” Bourdais said. “Fuel can often at times come into play. The nature of the track being a very short track, there are a lot of laps, and to save a lap, two laps, three laps is not out of the question.

“Yeah, it’s definitely one of those races that’s been played out in fuel saving mode sometimes pretty aggressively. Surely ’18 was. ’19 there was some drama, as well. Yeah, I think it’s never really a boring race, and with the number of cars you increase the chances of these things happening, and I think we’ll be, what, 27 cars or 28 cars. So yeah, it’s definitely going to be one to watch.”

The other factor is that Portland is a track that’s an equalizer. There’s long straights that give Chevrolet an advantage. There’s slower corners which help the Honda’s. That should have this more of an even playing field for the teams this weekend too.

“Yeah, I think it’s probably one of those tracks that really doesn’t really put a big gap between the two,” said Bourdais. “Not that there is a big one anyways, but I think it kind of levels things out between the torquey side of the competition and our more crisp top end. Yeah, I would say it’s probably a bit of an equalizer.”

Buckle up. You have all this combined with a championship race to watch with five drivers separated by 60 points with this being one of three races remaining in the 2021 season.