Can Martin Truex Jr. Get Back Going?

Its been a rough stretch of races for Joe Gibbs Racing’s Martin Truex Jr. But, now it’s a new season and can the 2017 series champion get back going again this weekend at the Darlington Raceway?

Truex, enters having just two top five finishes over the last 10 races on the season. He’s only had four top fives in the last 17 in general. Four of his last seven have been 10th or worse.

But, maybe Darlington was just what he needed. Truex, swept both stages and led a race-high 248 of 293 laps in a win this past May. He swept both stages in this race last year and led 196 laps but crashed with Chase Elliott while battling for the win with 14 to go. He was second and third respectively in the two stages in the second May race last year and has been running towards the front more times than not on the Lady in Black lately.

Can he sweep the year on the 1.33-mile track on Sunday?

Will Hamlin or Harvick Win?

Coming into the playoffs last year, Denny Hamlin had six wins. Kevin Harvick had seven. That’s literally half, 13 of the 26 races of the regular season, won by these two. After 26 races this season, they’ve not yet won.

In the first five playoff races last year, they won 3 of the 5. Neither has won since. Can they start off with a win on Sunday?

Denny Hamlin backed his way into the postseason. He’s winless in the last 31 races and despite starting the year off with eight top five finishes in the first nine races, he’s had just five in the last 17. His best finish in the last 17 races was fourth.

But, Darlington is a strong suit for him. He had a top three coming in last year’s Southern 500 before an incident before getting onto pit road for the final time that night. He was fifth back in May for his third top five finish in his last four Darlington starts.

Harvick is in a similar boat. He’s had six top five finishes all season. He’s also had just two top 10’s and no top five finishes over the final seven regular season races. Harvick’s scored just one finish better than fourth all year.

How did he fare at these tracks before this year?

In Phoenix he had eight top two finishes in his 15 prior starts. He wasn’t even competitive in March.

At Pocono, he was first and second respectively last year. He had led 209 laps in his previous six Pocono starts before 2021.

For Michigan, he swept both races last year and led 92 laps in one race and 90 in the other. His three race win streak in the Irish Hills came to an end a few weeks ago as he’s had five top two finishes in his previous six starts there including leading at the very least 15 laps in each of his last six starts prior to 2020.

For Darlington, he led 63 laps with RCR but in his time with SHR, he led 719 circuits.

So, to be that far off this year, what makes us think it will magically turn around now despite having won two of the last four races at the Lady in Black? 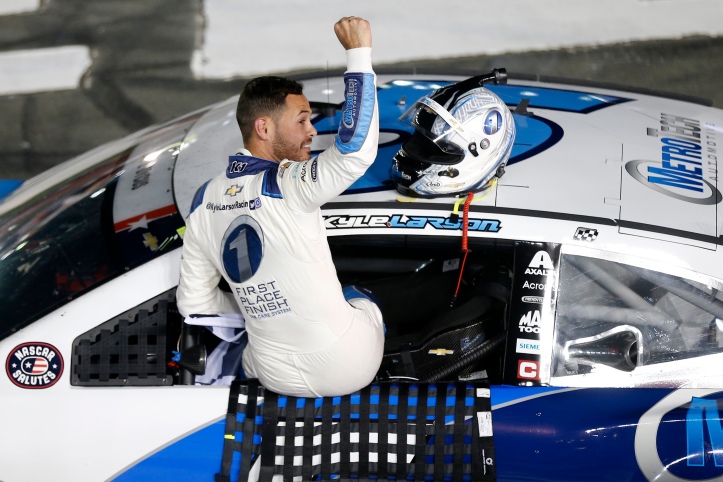 Can Kyle Larson Get Another Crown Jewel?

Kyle Larson has won almost all the big races this season. He won the Chili Bowl back in January. He won the Knoxville Nationals, the Kings Royal, the BC 39, NASCAR All-Star race and the Coca-Cola 600. Is the Southern 500 next?

Larson, has finished twice in each of his last two Darlington starts but has never won on the Lady in Black. Last year, Kevin Harvick dominated the regular season only to win the opening playoff race. Will Larson follow suit?

He won the Hoosier 100, Chili Bowl and Indiana Midget Week last year. All that’s missing is a Southern 500, so why not happen in his year of dominance? 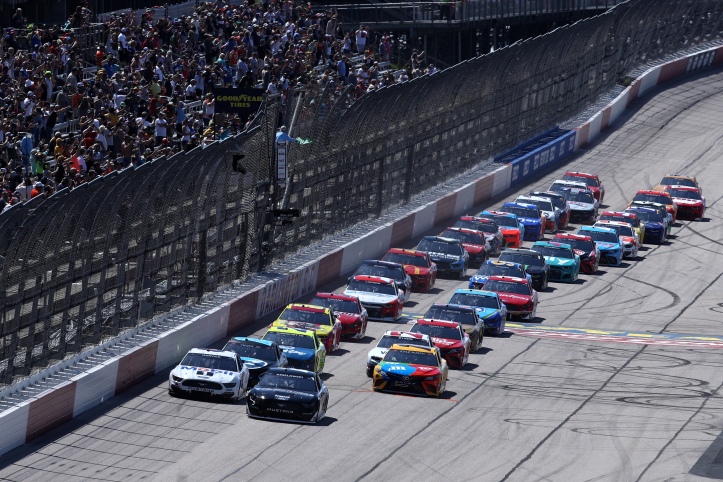 DARLINGTON, SOUTH CAROLINA – MAY 09: Brad Keselowski, driver of the #2 Freightliner Ford, and Kevin Harvick, driver of the #4 Mobil 1 Throwback Ford, lead the field to star the NASCAR Cup Series Goodyear 400 at Darlington Raceway on May 09, 2021 in Darlington, South Carolina. (Photo by Sean Gardner/Getty Images)

How Will The Turn 2 Patch Work?

The repaved patch in Turn 2 could greatly alter the racing on Sunday. The thing is, until we do start racing, no one knows what to actually expect. See, without any practice or qualifying ahead of time, it remains a great unknown.

Still, this has been the greatest topic of conversation in regards to Darlington itself this week as due to that patch, drivers and teams alike are questioning on what this does to the racing product. How will this affect setups and driving lines as someone like Chase Briscoe notes that he likes the low line through that corner but with it being paved, he wonders if he’ll have to ride the wall all the way around that section due to more grip.

With more grip too, that means you can get back on the throttle quicker which means faster speeds through Turn 2, down the backstretch and into the third corner. In saying that, faster speeds mean different handling options and setups for that third and fourth turns on the other end due to carrying more speed.

That’s why Turn 2 and the new patch/resurfacing in that area of the track only, will be a big topic this weekend.

Will Returning To a Track a 2nd Time Now Help?

Its been years since Darlington hosted two races in a single season. Due to COVID last year, they held three. Now, it’s down to two as they raced here in May and again this weekend. In fact, last weekend in Daytona marked the first time since Atlanta in July that we returned to a track a second time this season. This is the third time but the longest gap between the three among normal tracks.

How much does that play a role in the playoffs now?

All 3 races this round we raced at already this year. Bristol though was on dirt. Same can be said for the next round with Vegas and Talladega having spring dates but Charlotte being on the ROVAL this time around compared to the oval in May. Similar again for the Round of 8. We went to Kansas and Martinsville earlier this year and same for Texas but in Texas was the All-Star race with a different format and different aero/horsepower package.

Finally, Phoenix to close the year out with is similar to the spring race. How much do return trips play a role?

I think a lot.