NASCAR Playoffs start Sunday in Darlington, how crucial is it to be championship ready now?

NASCAR Playoffs are similar in nature as stick-and-ball sports. There’s multiple rounds, it’s in a win or go home format, the best in the regular season don’t necessarily take home any hardware and one champion is crowned at the end. But, where NASCAR’s version differs from theirs in the sense that you have 10 weeks before the start of the playoffs and the end.

Baseball’s is done within a month. The NCAA Tournament spans a few weeks. The NFL postseason goes from Wild Card Round, Divisional Round, Conference Championships then the Super Bowl following a week off.

The NBA is the closest to compare in the sense that in normal years, they start in mid April and end in early June, but still they only have four rounds. NASCAR has 10 weeks.

With that said, do the drivers feel like you need to be championship ready now, as in coming into Sunday’s Southern 500 (6 p.m. ET, NBCSN, MRN) at the Darlington Raceway which serves as the postseason opener, or is there time to get your team to that point?

“I’ve got five or six years experience doing it and I don’t know, so with that in mind, you try not to think about it, to be quite honest.  I try to just go out there and make the most out of what I have and not allow any of those connotations to either build overconfidence or to pull me down.”

Denny Hamlin told me that with how everyone ramps up the intensity this time of year, you kind of already have to be in order to match their intensity.

“I think that everyone ramps up their intensity, that’s not just the drivers it’s the teams themselves,” Hamlin said. “They bring the best of the best that they’ve been holding back for a while. Everyone is going to bring their best. There’s no secret in the playoffs when you’ve got 13 of the playoff drivers in the top 16 in the race, everyone understands what’s at stake and everyone goes out there and gives it everything they’ve got. It’s going to be important for sure to go out there and set the tone early and I think that we can do that given our performance and how we’ve been here lately.” 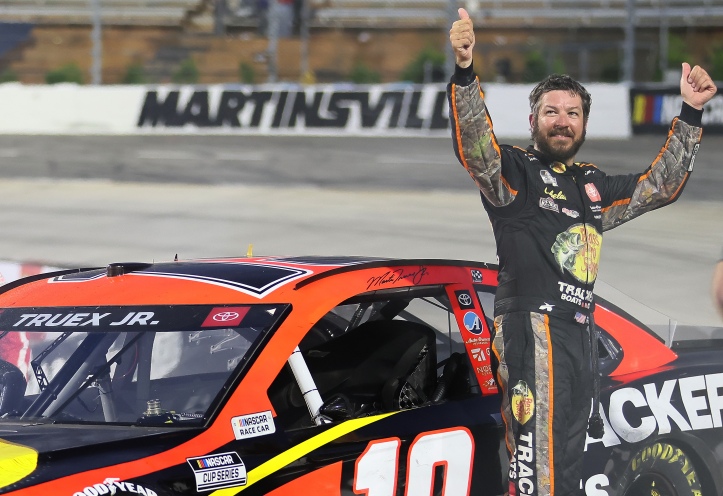 For a past champion in Martin Truex Jr. he agrees with his teammate in Hamlin in saying you have to be there now. He knows where you need to be at to win a title. He’s done it. He’s also been to multiple final fours like Hamlin and Keselowski have.

“You got to be there (now),” Truex says. “You may not have had the results lately, but you’ve got to have that team and that confidence and that ability. Whether that being the speed in your cars or the people making the decisions. You’ve got to have it all. You can’t just turn it on and flip a switch and change who you are. You’ve either got what it takes or you don’t.

“At the same time we’ve seen the best teams all year hit a speed bump in the road. That’s one thing about our sport is it’s not 1-on-1. There’s a lot that can happen. There’s a lot of things out of your control in racing. You can’t always control your own destiny. As much as you try to, there’s a lot that can happen. That’s something that’s totally different in our sport. You’ve got to have it. You can’t overcome it if you don’t have it. The best team doesn’t guarantee anything either which we’ve seen. It’s a difficult time. It’s high pressure but it’s a hell of an opportunity. I always look forward to being part of it.”

As far as if he’s there now?

“I do. I feel like we’re right there,” he told me. “We’ve had a tough summer. Circumstances that we couldn’t control, hurting our chances, etc. But I feel like our speed in our cars, decision making and the confidence is all there. We have what it takes and we’ll see if we can finish it off.”

Alex Bowman also agreed saying that he feels like you need to be maximizing each and every week throughout the entirety of the Playoffs.

“I don’t think you can turn it up towards the end of the Playoffs,” said the Hendrick Motorsports driver. “You need to be strong each and every week. While we didn’t have the summer that we wanted, I think we can have a great Playoff run. We had a miserable summer last year and had a really good Playoff run. I’m excited to get going. But yeah, I think you need to operate 100 percent each and every week.”

You do have two totally different seasons in the sense of the regular season and the postseason. Just because you had a good regular season doesn’t mean you’re going to have a banner playoffs and vice versa.

“I hope we haven’t peaked yet. We won a race a few weeks ago,” regular season champion Kyle Larson told me. “Yeah, I think we’re still capable of winning more races throughout the rest of the year and continuing to get better. I think all the race teams get better each and every week. We’re one of those teams that’s done that, too.

“It’s hard to predict. It’s been fun. We’ve been able to win a lot of races. Even when we weren’t winning, we were still up front. That’s what you’ve got to do here in these next 10 weeks.”

How do drivers approach the playoffs? I mean, do you have to change your approach to these races and how you race them or do you stick with what got you there?

“Yeah, I mean, it’s a fine line, right? I feel like you always want to grab that extra gear if you have it to pull. A lot of times you don’t. I think you can very easily reach too far and get yourself in more trouble than what you would if you really executed what you had to work with,” defending Cup champion Chase Elliott told me on Tuesday.

“I think it’s recognizing those things. Hey, can we be better? Do we have that gear to pull? Can we step it up a notch? If the answer is yes, Okay, let’s do it somehow, some way.

“If not, I do think it’s important not to reach too far and reach outside of what your reality is, where you are. If you start this thing and you’re an eighth-place car, that’s just where you’re at. You’re better off having a solid day and finishing eighth or maybe doing a really good job and finishing sixth than you are trying to reach for a win. I just think you can get yourself in a lot of trouble doing that. I’ve done that in the past.

“I think you have to really, number one, recognize where you’re at, then adjust your expectations a little bit to buy you some more time because you never know. I mean, you could get hot in the last three weeks and have a shot to win, but you have to get there first. It’s a unique balance.”

Kyle Busch notes that Jimmie Johnson kind of revolutionized how you balance the regular season vs. the postseason and that in order to be successful at the right moments, you kind of have to look at how they did it in their five year reign between 2006-2010.

“Years ago when we all kind of looked at how Jimmie Johnson was successful and what he was able to do and how he was able to elevate his game when it got towards the end of the year and into the postseason everybody was kind of like, ‘how do you do that?’

“I think they kind of had the playoff mantra ahead of time,” Busch told me. “How you go about this and how you do this and the mindset and the skill that it took to elevate your game. I think the race team did that as well.”

Busch said that while they’ve learned from that over the years, he thinks that they’ve kind of acclimated that to their strategy. But, there’s only so much that you can do too.

“If you’ve got fast cars, there’s only a whole hell of a lot that you can do every single weekend,” Busch continued. “If you’re going to have cars that are only 10th place worthy, then that’s not going to get the job done and you’re not going to be a championship threat. Speed in race cars is the No. 1 forefront.”