If the Lap 72 yellow for debris never comes out, Sunday’s Verizon 200 at the Indianapolis Motor Speedway was likely going to be a second straight week of a Hendrick Motorsports 1-2. Last week, Chase Elliott amounted a from the back but lacked the time to fully chase down Kyle Larson in Watkins Glen. It was the fourth time in 2021 that they had gone 1-2.

This time, it was another repeat. Larson, led Elliott by 4.3 seconds until that yellow with 10 laps remaining. With Denny Hamlin, Matt DiBenedetto, Kurt Busch and Chase Briscoe having just pit after the main leaders, Larson and Elliott elected to lead almost the entire field down pit road for fresh tires.

That altered the complexity of this race. Larson, would restart fifth. Elliott had troubles and would have to come now from 18th.

With the new two restarts having quick yellows and the final one having chaos between the top two at the time, you get the entire race changed from Lap 72 on.

The biggest issue this weekend was how Turn 6 was constructed. You had the turtles on the outside of the exit in the corner which plagued the Xfinity Series race, then the inside of the corner cause chaos in Sunday’s Cup race.

They had a caution mid race with the problem on the curb in Turn 6. By Lap 72, it was back. On Lap 77, Matt DiBenedetto ran over that portion and broke it free a bit. That debris from it hit Martin Truex Jr’s car and caused him to spin. No caution was thrown. A lap later, William Byron hit it, destroying not only the curb, but his car too as oil flew all over the track and caused a 10 car pileup.

That then caused a 19-minute, 14-second red flag to remove it. But, Miller mentioned that you can’t not have it there because speeds would have been between 15-20 mph quicker if so.

“When we laid out this track and did Xfinity testing last year before the race, all of the drivers said there absolutely had to be something there because that would have been way too fast of a section,” Miller said.

But, with the damage done, they had to remove it as the only option to get this race run to completion.

“That was the only way we were going to get back to racing today,” he said.

Boles defended the track though in saying that they’ve not had a single problem with the curbing since this layout was constructed in 2014.

“We’ve not ever really had an issue with those curbs at all,” Boles said. “The only curb we ever had an issue with was drivers’ left on exit,  which we haven’t seen in a couple of years. We look at that curb between every session. We look at it at night and in the morning. There was no indication earlier today there was even anything wrong with that curb. So it was a little bit of a surprise for us when during the race we started having an issue.”

Hamlin though says that the writing was on the wall proving that they’d not work. These cars weigh 3,400 pounds. Double that of an INDYCAR. When you have 40 cars weighing 3,400 pounds ramming over those curbs for 77 laps, what do you expect is going to happen?

“Our cars are lower to the ground than the Xfinity cars anyway and those cars got some major ground from the curbs,” he said on why this happened on Sunday and not Saturday. “If this was Formula 1, they’d have an inspection process to the track to say our cars aren’t suited for this. You need to fix this. Fix the curbs. Not have 8 inch turtles on the race track. That’s just janky. It’s shotty work. I think Roger (Penske) and his team can do better than what we did here this weekend and I’m sure they will. They spent a good amount of money already making this place better. We’re going to go to road courses, make sure they’re right. This is just, making people sit through red flags and stuff, it’s bad.”

As to how you fix it?

“There’s curbs you make that are flush with the surface. You cross them, it’s going to make the cars slower. You don’t need turtles to beat on them.”

The final restart was shaping up to be a battle of Denny Hamlin vs. Chase Briscoe. Joe Gibbs Racing vs. Stewart-Haas Racing. Could the hold off a road racing ace in AJ Allmendinger who was restarting one row behind them as well as the best two cars all day in Hendrick Motorsports’ Kyle Larson and Chase Elliott?

Once the green flag dropped for the final time, it was an intense battle into Turn 1. No one was going to give an inch and it cost Briscoe the most at the time. He went off course and ran through the infield grass portion of the north end section of the race track.

“There at the restart, everybody is trying to out-brake each other getting into one and we all kind of missed it to a certain extent,” Briscoe said of the first turn incident between the two. “I was getting ran wide and had nowhere else to go. I knew I was going to go through the grass. It was just a matter of do you go through it slow or gas it wide-open and hope you get through it.”

Unfortunately for him, NASCAR felt strongly that he gained an advantage by going through the grass and assessed a stop-and-go penalty. Third place AJ Allmendinger knew that was coming and was told to set his sights on chasing down Hamlin for the win.

Briscoe, knowing that his playoff hopes likely rested on crossing the yard of bricks first as well as him racing on his hometrack (Indianapolis Motor Speedway) driving for his favorite boyhood race who also calls IMS his home track and knowing that he could pay Hamlin back for his view of the incident, well that combo helped spark this wild outcome.

“I don’t know if there would have been a penalty if I had gone through it slow but that was my only chance to win the race at that point,” Briscoe continued. “I went for that and stayed on him tight and knew (A.J. Allmendinger) was right behind me. He was on newer tires. A lot of guys were getting lazy through that turn and would just swing it out wide and leave the bottom wide open.”

That meant Briscoe was aggressive going down the backstretch in hoping to get to Hamlin’s bumper. He looked to pass him in the Turns 7-8 combo but instead spun him.

“So I was kind of all over him (Denny Hamlin) in the esses and when I went to go underneath him I just clipped him in the right rear,” Briscoe said of his viewpoint of the incident. “He was already trying to get back to the left so it just turned him right around. It is unfortunate for them. They were probably going to win the race if (Allmendinger) didn’t get to him.”

Most wondered why Briscoe was even pushing that hard. He wasn’t going to win and he took out the driver who likely was. Some questioned on if that was intentional for how Hamlin pinched Briscoe in Turn 1. Briscoe says that he never would have done that intentionally as he maintains that he didn’t know at that point that he was even penalized. It wasn’t relayed down to him yet by his spotter.

“For us we got a penalty and I don’t even know where we finished. It is frustrating to be that close. You can taste it and imagine what it would be like and then it gets taken away. I have a lot to be proud of. I feel like I showed that I belong here and I will get another chance next year.”

Hamlin says that he felt like initially Briscoe did the move out of desperation to get into the playoffs and felt like that was no way to win a race.

“I didn’t think I’d get crashed coming to the white,” Hamlin said. “I thought we were going to have a great day and take back the points lead but instead it turned around.

Hamlin, says that he’s not going to payback Briscoe in the future but does say he will race him a bit differently from this point forward.

“I’m not going to harp on it,” he said. “You have to live with the result because you can’t change it. He can’t change it. I can’t change it, right? I got crashed. He made a mistake. It happens. I think he was in desperation mode like he said and it came at my expense. Certainly if roles were reversed down the line, and he’s going to be here a while, probably not going to cut him any breaks in the end. It all comes back around. It doesn’t mean I’m wrecking him. It just means I won’t cut him any breaks from here on out.”

When Briscoe and Hamlin had their issues coming to the white flag, AJ Allmendinger and Kaulig Racing capitalized and scored their first win together as a team. 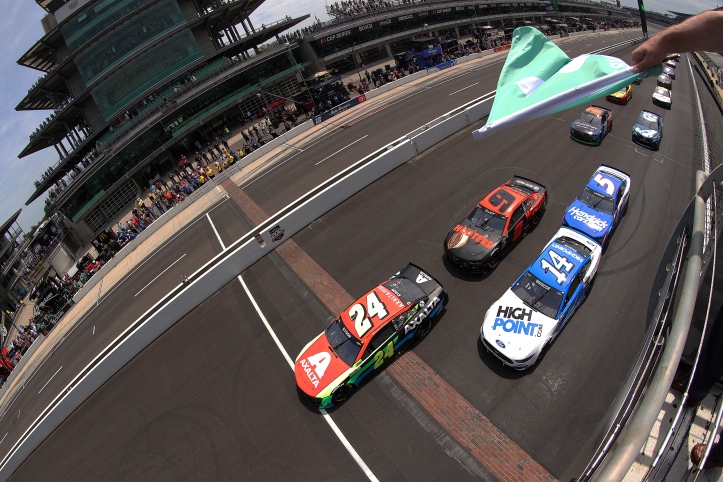 The drop of the green flag was one of the top moments in the race since this was the start of what sounds like a new tradition in Indy with NASCAR’s on the road course. Despite all the problems that occurred in Sunday’s race, there’s no plan to move this race back to the oval. Do we look back on the 2021 race decades down the road?