NASHVILLE, Tenn — Scott Dixon started second and finished there in Sunday’s Big Machine Music City Grand Prix. But, if not for some lucky breaks for his Chip Ganassi Racing teammate Marcus Ericsson in coming back from an airborne crash on Lap 4 to win, then it may have been Dixon, not Ericsson, celebrating in victory lane at sunset of a wild inaugural race on the streets of Nashville.

Colton Herta crashed from second place with five laps remaining while trying to chase down Ericsson for the win. The red flag was drawn setting up a three lap shootout for the win between Ericsson and now Dixon. But, due to Dixon’s pit strategy call, he knew then that he had no shot at a victory.

See, Dixon needed track position back and on Lap 45, decided to get fuel only. That paid off to get him back in the hunt for the win, but the last time he changed tires was on Lap 32. He went the final 47 laps on the same set of tires which he said he knew that he had nothing for Ericsson on the restart due to the age of his tires at that point.

“Yeah, I was just hanging on,” he said. “The rear tires were definitely pretty shot. I think everybody kind of around us on reds, I think Colton did a tremendous job to fight his way back through. He had some serious speed. I’m not sure how that equated. I know he had a big lockup previous to that. I’m not sure if that caused the second situation he had when he found the wall.

“For me, when the tires are bad, it’s really hard to get fuel mileage as well. You can’t really roll the speed you need to in the apex. It’s a bad combo. 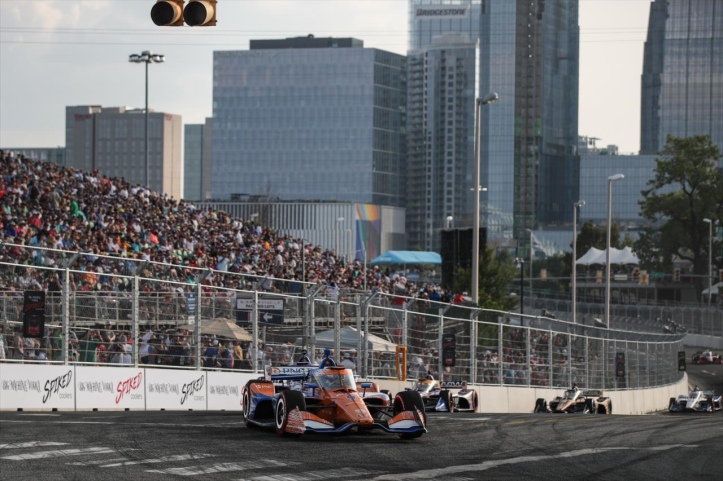 Ericsson, got a great restart and defeated Dixon by 1.5596-seconds for his third top two finish in the last five races. In fact, since we got to June, no one has scored as many points as Ericsson as he’s had a top nine in all five races and a top six in four of them. That’s propelled him up to fifth in points with him going from -104 to -79 heading to the Indianapolis road course next weekend.

Dixon, had to instead settle for runner-up in his No. 9 Honda for his 49th career second place result. Only Mario Andretti (56) has more. Dixon, now has three straight top four finishes on the season and a top 10 in all but one race. He went the final 47 laps on the same set of tires as he pit on Lap 45 for fuel only.

“I don’t really know what to say about the day. It was a crazy race,” Dixon said. “There was a lot of yellows, a lot of reds. I think we did almost 45, 50 laps on the last set of tires. We didn’t take tires on the last stop. They were blacks. That was real interesting.

“Yeah, kudos to the team. You got to take those wins, man. He was in the right place at the right time. I think he had probably one of the most eventful days of everybody out there, flying up in the sky, then getting a drive-through penalty and all that stuff, coming out with a win.”

That meant it was also a great points day for Dixon too.

Dixon also entered Sunday’s race 56 points behind his teammate Alex Palou for the championship lead. He leaves 42 back. Did Palou’s grid penalty from having to change an engine open the door for Dixon to come back in?

“Obviously it was a tough weekend for Alex just because of the fact that he had a six-spot grid penalty through no fault of his own,” Dixon said. “Those weekends are definitely frustrating, especially on a track that it looks like you could have started anywhere. Maybe you were better off starting at the back for this one.

“Yeah, obviously it’s a race for us against teammates at the minute. You want everybody in the team to have great results. It was great to see Marcus grab another win here. Obviously he’s closing the gap on the championship, as well. Be fun to have three cars fighting it out. I’m sure Chip would definitely like that.”

Palou, initially qualified his No. 10 Honda in third but due to a blown engine in an offseason test at the Barber Motorsports Park back in the winter, it put them behind. See, they knew they’d be one engine behind everyone else and for the second time this season, it’s came back to bite them.

The damage is at least minimal as he’d roll off ninth instead of third, and finish seventh.

Dixon, cut 14 points off his deficit though in the process.

“Yeah, it was definitely I think a good gain on Pato,” Dixon said. “I think Alex still had a pretty decent race. They caught back some good points there. I think we’re just over 40 points behind. There’s definitely loads — 250 plus points left on the table, there’s lots that can happen, especially at some of the racetracks we’re going to.

“Yeah, big day for us for the points. Obviously a win would have been that much better. But, yeah, I think this is where it’s going to separate a little bit. We have to see how that plays out.

“Good day for Ganassi in general obviously with two on the podium. For us, it was a good headway for fighting for the championship.”

He’s had a pair of fourth place finishes and now a runner-up in the last three races and seven top fives this season. Palou, has had seven top fives himself but six of them have been on the podium to Dixon’s now three. That plus Dixon having bad luck via an ill timed first caution in the double points paying Indy 500 has put him farther back than he really should be.

The opportunity is now there for Dixon as Pato O’Ward finished 13th. Fourth in points, Josef Newgarden, started 12th and only came home in 10th. Dixon was the only one in the top six in points entering this weekend’s race to even have a top five starting spot for Sunday even and it paid off.

Is this the moment the pendulum has swung back in Dixon’s favor? The door is now open.