“It is make the most impactful announcement we’ve been able to make in my view during my tenure here at INDYCAR,” Mark Miles said on the TV deal, why Miles, Jay Frye and Penske have the series destined for historic proportions

INDIANAPOLIS — Stop me if you’ve heard this before, “the future of the NTT IndyCar Series is bright.” We seem to say that every year, but every year the series delivers on the expectations and the optimism only grows larger and larger each offseason.

Well, if you dig deeper, I’m not only ready to say the future of INDYCAR is as bright as ever, I feel like we’re about to transition into that future for 2022 as the start with glory years still ahead too. I feel like INDYCAR has come a long way since 1996 and while they’re exponentially grown the right direction, with the new deals in place, I feel like the best is still yet to come and that’s a testament for everyone involved.

See, for years INDYCAR has lacked stability. From the end of the CART years with prompted the infamous split in 1996, until this new regime started around a decade ago, INDYCAR lacked the leadership and the vision that it took to be a part of the relevant sports world.

For every step they’d take forward, they’d take a number of steps back again. Then came this current regime in which INDYCAR has not only taken a turn back towards the right path but they’ve also shown that they’re here and here to stay for a long time again forward. For every decision, there’s not one going the other way again.

That’s a direct reflection of Mark Miles, Jay Frye and their teams around them.

The stability factor and the people running the show are why INDYCAR has taken a massive step in the right direction. The TV deal is just another example. The pendulum started swinging this way when Miles come on board. Then it took a bigger turn when Jay Frye was added to the series a few years later. The two of them have done wonders.

Between them, we’ve seen a better TV contract, a new entitlement sponsor for the series, a new car as well as the addition of the Aeroscreen. INDYCAR was already on the up even before Roger Penske’s purchase of the series as well as the Indianapolis Motor Speedway at the end of 2019. 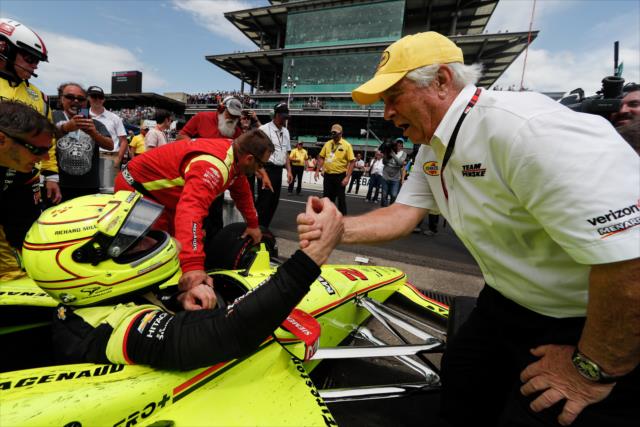 Now, you get Penske, Miles and Frye leading the charge and it’s paying off. Look at how much good Miles and Frye did before someone like Penske came around. Now between the three of them, well I don’t think the series has ever been in better hands.

“It is make the most impactful announcement we’ve been able to make in my view during my tenure here at INDYCAR,” Mark Miles said on the TV deal. ‘Our key to our ability to reach fans and this announcement today is very, very important and in my view ensures the next few years of our continued growth and audience.

He’s not wrong. This just solidifies the future of this series moving forward. I mean think about it. In 2019, the series replaced Verizon with NTT Data. When’s the last time you didn’t really have to worry about the revolving door that was title sponsors in INDYCAR racing? You don’t have to anymore.

Just this past May, they two sides reached a new multi year agreement for a sponsor that genuinely cares about this series. That news comes after the one last October when INDYCAR announced that Chevrolet and Honda are in as engine manufacturers for the series “well into the end of the decade.” Also, for 2023, will be the introduction of a new 2.4-liter, twin-turbocharged V-6 with hybrid technology. The engine would add an additional 100 horsepower to more than 900.

“Faster and louder,” says Frye. That’s what fans want and INDYCAR is giving it to them in a big way.

That takes care of the series sponsor, the manufacturers and the engines. The Aeroscreen has proven its worth and now you look at the rising car counts which are as high outside of the Indy 500 in decades. There’s a legitimate chance to see the number pushing to 30 cars at some races in 2022 outside of Indianapolis.

The rookie class in 2021 for example is Scott McLaughlin, Romain Grosjean and Jimmie Johnson. Think about that.

Strong teams, deep fields with the talent pool the best its ever been, locked in series sponsor, locked in engines as well as engine packages and a phenomenal car.

The only other big hurdle left to accomplish other than a new OEM was announced on Tuesday with the TV package.

Gone are the days of split TV networks and wondering where you’re going to find an INDYCAR race. Starting in 2019, you got exclusive rights to NBC sports. Starting in 2022, a second contract with them will take effect with an astounding 13 races on network TV.

“I think you’ve got some of the brightest young races and most competitive racing out there,” said NBC Sports’ President Jon Miller on why INDYCAR makes sense on network TV. “Week-in, week-out, we see great rating wherever we have an INDYCAR race on with recognizable names who are becoming bigger and bigger stars out there.

“We find that it fits into a very good, tight two-and-a-half hour, three-hour window which we think is important.”

Everything is better in INDYCAR and it’s showing.