Was Loudon a Championship 4 preview? Hendrick better hope not as these teams look the best now

LOUDON, NH — Hendrick Motorsports is officially on a winless streak. Two races to be exact and three in the last four overall. What’s odd is, they’ve not been looking like themselves lately either.

HMS drivers combined to lead just 13 laps all day last weekend in Atlanta. That comes after leading nearly all 500 miles of the race at the same track in the spring. They didn’t lead much two weeks prior in the second race of the Pocono doubleheader. Now, for a third time in four races, they looked pedestrian.

They led 40 of 140 laps at Pocono. They led 13 of 260 last Sunday in Atlanta. Now, they led 53 of 301 laps in New Hampshire, all coming by Elliott early just as he did last week in Atlanta. Is it time to worry yet and by worry I mean are teams catching up?

We’ve seen seasons ebb and flow? Is this just part of an ebb or is it a flow? One thing is, the speed isn’t there like it was prior but that could be circumstances too.

Sunday saw HMS finish 7-9-18-21. They were virtually non factors all day, just as they were last week.

The major thing is though, Hendrick Motorsports hasn’t won a race at Loudon in nearly a decade. It was 2012 to be exact. In fact, their overall performance has been lacking in New Hampshire lately. Elliott entered Sunday having just one top five in seven tries on the Magic Mile. William Byron and Alex Bowman have each made four starts for HMS on the Magic Mile and until Bowman’s ninth place run on Sunday, neither had yet to score a top 10. Kyle Larson was making his first HMS start on the track this weekend, so you can’t factor in his past stats yet but he did only come home seventh after not leading a single lap for a second straight week.

Another factor is that maybe they’re lacking on the 750 package on short tracks. Larson was seventh in Phoenix, fifth in Martinsville, 20th in Richmond, second in Dover and now seventh in Loudon. Elliott was fifth, second, 12th, third 18th and on the same tracks. Byron was eighth, fourth, seventh, fourth and 21st respectively while Bowman actually won twice (Richmond, Dover) and was 13th, 34th and ninth in the other two.

Dover was their obvious best at 1-2-3-4 but they’ve not been as dominant on other short tracks either. Where this could be the most worrisome is they’re not the best on short tracks right now in gernal. Even more so, Loudon has been an early preview of the Fall Phoenix race too.

Since New Hampshire went down from two races each year to one annually, this race has ended up being a Championship 4 preview. Last year especially since Loudon can translate over to Phoenix. In fact, with Richmond, Martinsville and Phoenix all being in the playoffs, that’s 30% of the postseason being on like tracks to Loudon. That’s why this race is arguably so important.

Plus, the tire used on Sunday in New Hampshire will be used in November at Phoenix. There’s a lot that can transfer over. 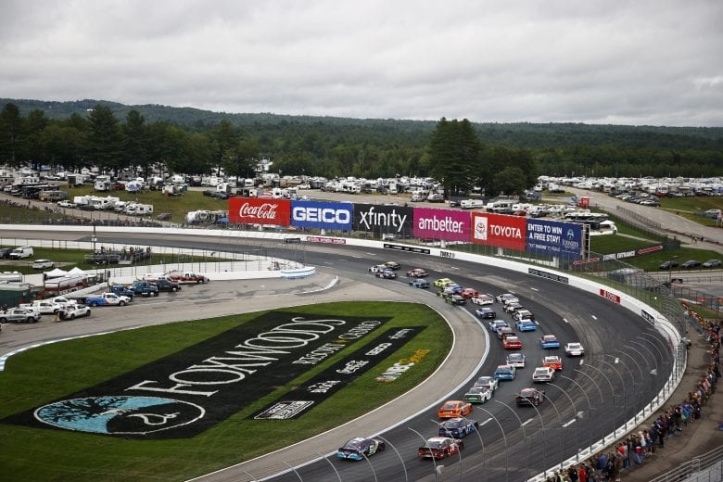 But, in general though, all four drivers to make the Championship 4 in 2018, 2019 and 2020 have all finished in the top 10 at New Hampshire. Furthermore, they’ve went 1-2 in each of those three years at the checkered flag in this race including taking three of the top four spots in two of the three years overall.

Also, 12 of the last 13 New Hampshire winners are Cup champions.

What does 2021 hold? Will three of the top four finishers on Sunday be in the Championship 4 at Phoenix? That’s great news for Aric Almirola, Christopher Bell, Brad Keselowski and Joey Logano.

The odd trend is, among the four Championship 4 drivers the last three years, the one that finished last among the four at New Hampshire won the title. Logano was ninth in 2018, Busch eighth in 2019 and Elliott ninth in 2020. Does someone like Kevin Harvick, Larson, Ross Chastain, Alex Bowman or Denny Hamlin benefit from that?

Right now, JGR has looked great on 750 tracks, which helps Hamlin. He finished third in Phoenix, third in Martinsville, second in Richmond and seventh at Dover. We’ve not had a short track since until Sunday. We have Richmond, Bristol, Martinsville and Phoenix to make up 40% of the playoffs on short tracks. He led 276 of 500 laps in a third place run at Martinsville. He led 207 of 400 laps a week later in Richmond. He also led 33 laps in a third place effort at Phoenix. He may have been 10th on Sunday but he was already behind the eight ball from an opening lap spin.

Martin Truex Jr. and Kyle Busch never got to flex their muscles due to an early race crash not of their doing. But, Truex won at both Phoenix and Martinsville earlier this season. He was also fifth in Richmond after what should have been another top two or three result.

Busch’s day ended early but he also had four straight top three finishes entering as he’s been as hot as anyone. So has his teammate Christopher Bell. He finished runner-up for the second time in three weeks.

Then you get Team Penske that looked really good in New Hampshire for a second straight year. That translated well over to last year in which Keselowski won the playoff race at Richmond and led the most laps in the Championship 4 at Phoenix. Logano, led the most laps earlier this year in Phoenix and finished second. He was sixth in Martinsville, third in Richmond and if not for an early race penalty would have likely been in the hunt for a win as he made up two laps to finish fourth, one spot behind Keselowski but one spot ahead of Blaney.

Right now, I think the top teams in order on the short track package is JGR-Penske-Hendrick respectively.

HMS was nowhere near that on Sunday. On short tracks, Toyota has led 784 laps this season. Ford has 526 laps led. Chevrolet only has 136.

HMS has won 15 of the last 36 races now after winning 14 of the previous 133. They’re 10-for-22 on the season in general and have won eight of the last 11 including last month’s All-Star race too. So, it’s not like they’re too far off, it’s just the area of weakness is glaring too.