Is JGR/Penske closing the gap to HMS? Why Pocono may not have signaled much but Kyle Busch may be their top threat

I guess a tire and fuel strategy was all it takes to derail Kyle Larson and Hendrick Motorsports. On Saturday, Larson took over the lead with four laps remaining in the NASCAR Cup Series race from the Pocono Raceway. But, on the final lap in the final turn, a tire went down and sent Larson’s No. 5 Chevrolet into the Turn 3 SAFER barrier.

His three race win streak came to a crashing halt as he was going to be the first driver since 2007 to win four straight points paying races in NASCAR’s premiere series. He’d rebound a day later for a runner-up for his seventh top two result in the last eight races on the season.

As luck may have it though, another Hendrick Motorsports driver was right there for the taking. Alex Bowman, the guy who Larson passed, was right there to capitalize and take his third win of the season as a result of Larson’s misfortune.

Even when you take a way away from a Hendrick driver, another is there to gain. That’s how hard it is to beat this HMS group. The only path right now to beat them is going to be bad luck. A tire. A bad pit stop. A crash. That’s it. 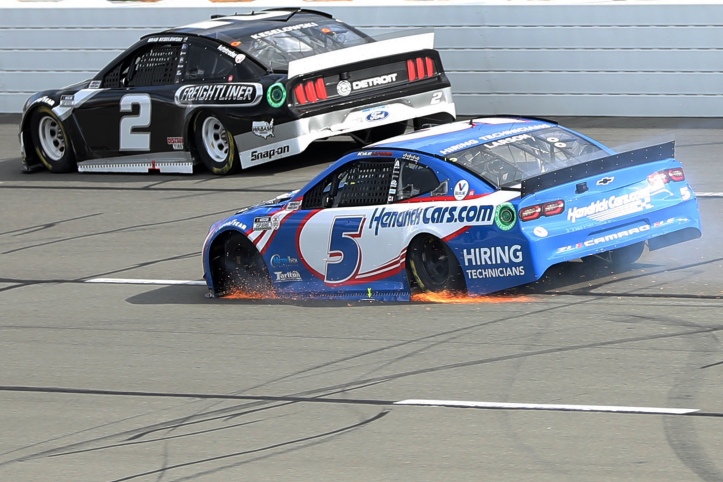 If Larson’s crash doesn’t happen, they finish 1-2-4 which would have been their fifth 1-2 finish in the last six races. That’s how dominant they’ve been.

Now, who’s next best in class? Last weekend showed who.

Joe Gibbs Racing has shown more times than not it’s going to be them, but they’ve also cooled off lately too. Was that part of HMS’ rise, are they experimenting or did they really lose something?

Coming into Sunday’s second part of the doubleheader weekend, the last driver to beat HMS was Martin Truex Jr. back on May 9 in Darlington. Kyle Busch won a week prior on May 2 in Kansas. Both have been on different trajectories since.

Busch, capitalized on William Byron and Denny Hamlin not being able to stretch fuel to score his 59th career Cup Series win on Sunday. He’s starting to come alive now. Busch, won in Kansas. He was third in Darlington. He was 27th in Dover, but 10th in COTA, third in Charlotte for the World 600, fifth at Sonoma, 11th in Nashville and now second and first respectively in Pocono.

The driver to break up the HMS party in Race 1 at Pocono? Busch.

The driver to break their streak in Race 2 at Pocono? Busch.

He could be their main rival as the season goes down to the wire. Despite his success last weekend, Busch still feels like it was as combo of Pocono being a great track for them and that HMS has still shown more speed.

“Well, this is a really, really good place for us,” Busch said. “We’ve been fortunate to be fast here since probably since 2014, ’15 time frame. We’ve carried that on through to today. We have a really good baseline package of what we know how to work off of. As the aero packages change, the tires change, all that changes, you have to change a little bit, as well, too. Our guys did a really good job of coming here with fast stuff. Same thing this weekend. We were fast.

“The Hendrick cars were still faster. Yesterday for sure through the corners. Never really ran with them, raced with them much today. I guess I did with the 24 a little bit when I was stuck behind the 3. He couldn’t pass me either. Again today we were pretty quick.

“Overall this is a good place for us. We like coming here and having good runs. Last week was not so good for us. We did have that flat tire that knocked us all the way back. Still I don’t think we’re going to finish much more than 12th-ish anyway.

“I could have beat ’em yesterday, but Kyle Larson didn’t push me far enough into turn one. I think the 12 pushed the 48 farther. That’s how he got slid up in front of me. It’s racing. Racing is racing.

“I don’t know that the Hendrick guys can say the same thing like that. They haven’t been fast here in a while. Obviously they were better, they were faster this time around. But this was a good chance for us to stack up as good as we can be and as good as they are, and see what happened.

“We still had a little bit of an issue this week that I kind of feel like we always have. We don’t — I don’t know how to say this without giving it all away. We don’t use all four tires as good as we should. Denny and I have talked about that for a couple years, kind of complained about that. I feel like the Hendrick guys have always had the mechanical grip, but now they’ve also gotten the aero grip, engine, mechanical. They’ve got all three parts. I feel like we’re still just a tick off on the mechanical.”

Truex meanwhile, finished 18th on Saturday and just 11th on Sunday. He’s had two top five finishes in his last 10 starts overall. Five of his last seven have been 18th or worse. He’s joined towards the back by teammate Christopher Bell. He won the second race of the season on the Daytona road course but has finishes of 17th, 28th, 14th, 21st, 38th, 24th, 24th, ninth, 17th and 32nd respectively in his last nine starts.

Both are going backwards.

For Hamlin, he had a chance to win Sunday’s race. He was there. He was just one lap shy of being able to do so. He started the year off with eight top five finishes in the first nine races. He’s since had two now in the last 10. One of which was Saturday in a fourth place run. I wonder how much of his slight backslide, and I use the word slight here because he’s only fallen barely back, has been due to HMS’ rise. Take HMS out of the equation and Hamlin is back in the top five again.

Is this the team to dethrone HMS as the season goes on? Since the race at Martinsville this past spring (12 races ago), Hendrick Motorsports has won seven times. JGR has won four times in that span, two of which being by Busch. The other?

What about Team Penske though? They had all three cars in the top 10 on both Saturday and Sunday. Are they starting to come around?

Ryan Blaney scored his first top five of the season since his win in Atlanta back in March on Saturday with a fifth place run in his No. 12 Ford. He was sixth on Sunday.

Joey Logano was seventh in his No. 22 Ford on Saturday and 10th on Sunday in a relatively quiet weekend for him.

Brad Keselowski rebounded to finish 10th in his No. 2 Ford on Saturday but used a brilliant pit call to finish third on Sunday. For Keselowski, his slide lately was a lot like Blaney’s. This was his first top 10 result in the last eight races on the season.

Could Pocono be the turning point?