Larson on a streak like none other, is Busch racing in the Xfinity Series days numbered? A look at both here

Kyle Larson is not only looking like a weekly contender, he’s on a historic streak. Larson, dominated last Sunday’s inaugural Ally 400 at the Nashville Superspeedway. He started fifth but quickly found the lead in his No. 5 Chevrolet. He led 264 of 300 laps en route to a dominating win.

What’s impressive is, its not like he’s just winning — he’s instead blowing people out. Since the Mothers Day weekend race at Darlington back in May, he’s finished either first or second in each race. But, if you dig deeper, look at what he’s done in those races.

In Dover, he was a final pit stop away from a win. Alex Bowman’s pit stop was a little bit quicker and Bowman won the race as a result. In COTA, the rain in the end halted Larson’s potential bid for another win. At that time, he was heading to the Coca-Cola 600 on the heels of three straight runner-ups. 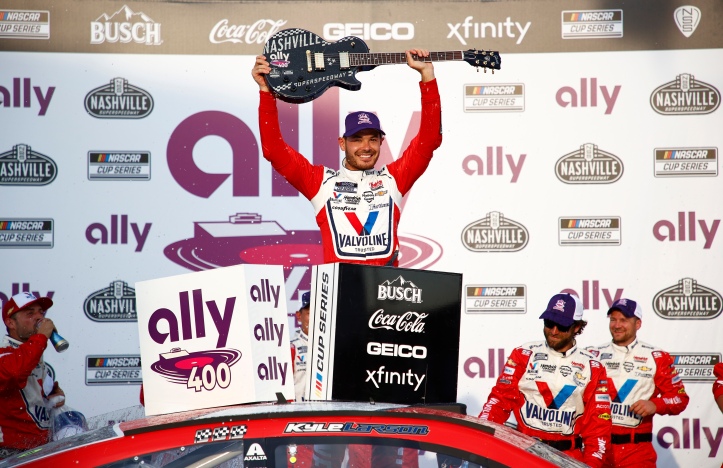 A week after that came an All-Star race triumph in Texas followed by leading all but 36 laps in a victory at Nashville to where he beat second place by 4.335-seconds.

Not only is he winning races, he’s winning stages. He’s accumulated 32 playoff points as a result which is nearly double the rest of the field. Martin Truex Jr. is second with 18. Third is Bowman with 10.

Here’s the kicker, he has a great opportunity at getting 15 more if he wins the regular season championship which coming into last month, seemed like would be a feat that would never happen.

Larson entered Darlington -144 points to Denny Hamlin for that top spot in the overall standings. He’s cut that lead down to 10 for Hamlin. He’s made up 134 points in six races. Why would that stop now?

Hamlin, started the year off with eight top five finishes in the first nine races. He’s had just one in the last eight. Can he get back going again?

It’s hard to think a guy that won seven times last year and had a top five in all but one start through the first nine races of 2021 could go winless for much longer. While Hamlin is +318 over the cutline and really not falling into much danger of not making the playoffs since the new winners have started to die down, he just needs to find his groove again.

Larson, has 32 remember. Luckily though, with Larson hogging them, he’s only three playoff points shy of having the fourth most and just five away from third. If he wins a race, he’d be in really good shape. If he wins two, well he’d catch Truex Jr. for second most playoff points.

That’s why Hamlin needs to get back going again. I just question on how much of this dip in performance is part of HMS’ rise in speed and JGR trying to find speed for later in the season. Maybe it’s a combo of both.

With Hamlin being so close earlier in the year but not winning, did they give up some speed to figure out ways to be faster later? Without much on track time and really no testing opportunities, can they be looking ahead? Is that even an option that’s crossed their mind?

Is HMS’ domination taking those top fives away too?

Since Kansas, Hamlin still has had four top eight results. In Darlington, his teammate won with two HMS cars in front of him. In Dover, HMS went 1-2-3-4. Only Joey Logano and Kevin Harvick finished in front of him. At COTA, it was run in the rain so there’s no way to really compare that race then to anything and hold much weight to it. He was seventh in the ‘600. Four of the six spots in front of him were from HMS drivers. Kyle Busch and Austin Dillon were the only other two drivers to beat him that night.

For Sonoma, he was eighth. HMS went 1-2 that race. Nashville was an anomaly.

Take HMS out of it, is Hamlin back in the top five? Sure seems like it.

Kyle Busch picked up his 100th career Xfinity Series win last Saturday in Nashville. He’s vowed in the past that once he’s reached 100 NXS wins, he will get out of the series. Well, what about now?

Busch, didn’t mince works last weekend in saying that he would still like to get out but that’s due to how he’s being treated from fans and media when he runs in the series. When other Cup drivers run in Trucks or Xfinity competition it’s almost like its celebrated. But when Busch does, it’s frowned upon.

He’s sick of dealing with the noise. He’s proud to silence the crowd by winning when he shows up as it gives him extra motivation, but he’s just grown tired of the double standardness of it. I mean, he’s not wrong.

Ryan Preece, a Cup driver, won his first career Truck race on Friday. No one had any complaints from that. When Chase Elliott shows up, it’s celebrated. When really anyone does, no one bats an eye. When Busch does, it’s treated as if he’s a bully picking on kids. 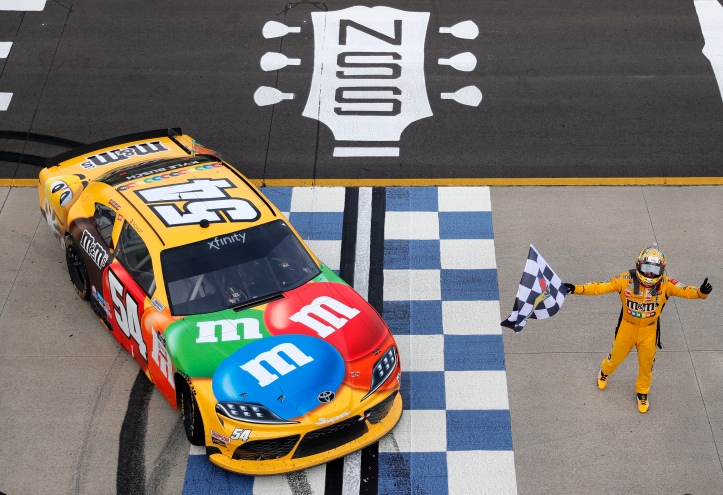 What people don’t recognize is, race car drivers love to do just that, race. For Busch, he doesn’t golf or fish or hunt or do hobbies like that. His hobby is racing. Its his passion. He loves to do it.

So, when he races a Truck or an NXS car, he’s just doing a fast paced hobby. Plus, for his Truck team or for Joe Gibbs Racing, having Busch in that ride helps sell sponsorship to keep that car on the track for more races that season.

But, as they have clamped down more and more on Cup drivers racing in the Trucks or Xfinity Series, Busch says that he’s being pushed out and is ready to just hang up his helmet in NXS. It was initially thought that he’d be back next year since they’ve sold sponsorship for him to be there, but new reports say otherwise.

Busch or any full time Cup driver that meets a criteria are only allowed five races per year in NXS, He’s ran three in NXS this season and won them all. He was only 1-for-5 last year. In 2019, he could run seven races and he won four of them and runner-up in another.

Can he go perfect? His final two races at at Road America (July 3) and Atlanta (July 10). Are these his final two NXS starts of his career?