All the information for formats, who’s eligible, why they’re eligible, why Texas and more for this weekend’s NASCAR All-Star Race

Last year, COVID allowed for a change. There was always talks of moving this race to new tracks each season and they finally did so. It was moved to July at the Bristol (Tenn) Motor Speedway. Instead of going back to Charlotte this season, they elected to try the Texas Motor Speedway instead. It was moved now to June.

Well, SMI owns these tracks for the All-Star weekend and they’re going to use one of their tracks, not one owned by NASCAR. Charlotte, Atlanta, Bristol, Texas, Las Vegas, New Hampshire, Sonoma and Kentucky are all owned by SMI. So, one of these tracks will likely always host the All-Star event.

But, with how the schedule lines up, Texas was really the only one who could host this season. That’s because Kentucky was left off, Sonoma and New Hampshire have just one date, Charlotte isn’t going to give up the ‘600 or the ROVAL, Bristol had the dirt race and the night race while Vegas has a playoff date, Texas could gain the most by giving up a spring race weekend in efforts to host a summer All-Star event. Plus, with COTA on the schedule now, it works out best for all parties.

So, here we go to Texas this weekend. In saying that, who’s eligible?

Four more drivers will join them in the field, three of which making it in via the Open and the other the fan vote winner.

There’s 22 cars racing in the open with Quin Houff, Corey LaJoie, Tyler Reddick, Aric Almirola, David Starr, Chase Briscoe, James Davison, Chris Buescher, Matt DiBenedetto, Bubba Wallace, Austin Cindric, Anthony Alfredo, Ross Chastain, Erik Jones, Ricky Stenhouse Jr., Cody Ware, Josh Bilicki, Garrett Smithley, Timmy Hill, Justin Haley, BJ McLeod and Daniel Suarez taking part. Ryan Preece’s No. 37 Chevrolet won’t be there as JTG Daugherty Racing has elected not to show up. See, NASCAR states that all 36 chartered cars must be there but the 37 entry doesn’t have a charter. With this race paying no points and Preece being forced to the open, why show up and race 50 races and risk not making it to the main event? What gain do they have? There’s too much risk of tearing up equipment, so they’ll sit this one out. 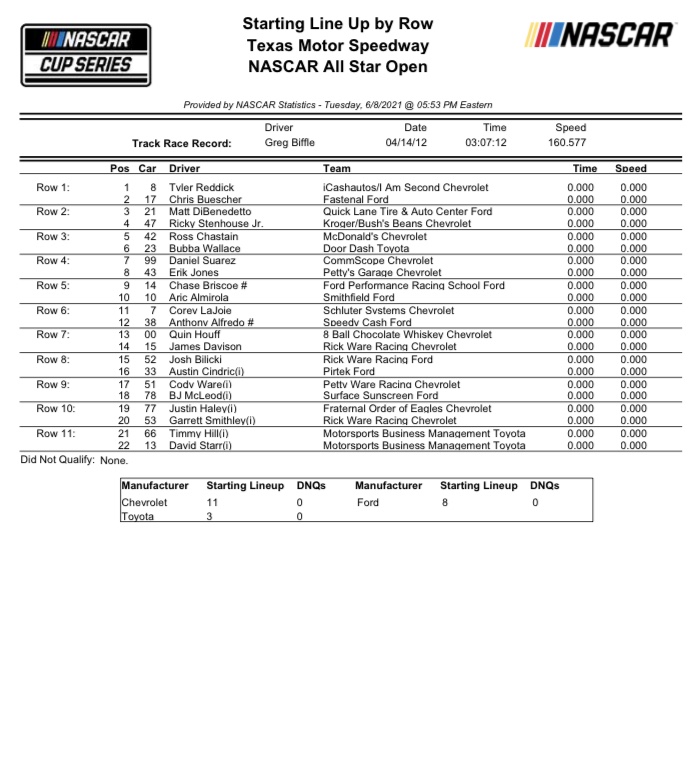 Plus, the horsepower package is 510 this weekend. That’s 40 less than normal as NASCAR is trying to experiment with bunching this field up even more and for Preece, they’d gain no information for the playoff race anyways since there’s a different package this weekend than from then.

How the All-Star Race Will Look?

Only green flag laps will count in the All-Star Race.

Cars will use a 57/64-inch tapered spacer. All other elements of the car remain the same.