How qualifying works to set the field for next Sunday’s 105th Running of the Indianapolis 500 (11 a.m. ET, NBC, INDYCAR Radio Network)

INDIANAPOLIS — We’ve arrived at Indianapolis 500 qualifications this weekend as four days of practice to set the field for next Sunday’s 105th Running of the Indy 500 (11 a.m. ET, NBC, INDYCAR Radio Network) are in the books.

Now, I get where this weekend could be confusing for the casual fan, so lets take a deep dive on what to expect for Time Trials and how it all works.

In terms of the format, they’ll go in order of the draw. That takes place on Friday after practice to set the qualifying order for Saturday’s qualifying session. Typically, you want an earlier draw when the track is a little bit cooler in comparison to the end as the day heats up as time goes on. By starting an hour later than the customary 11 a.m. ET start, that advantage is negated a bit. 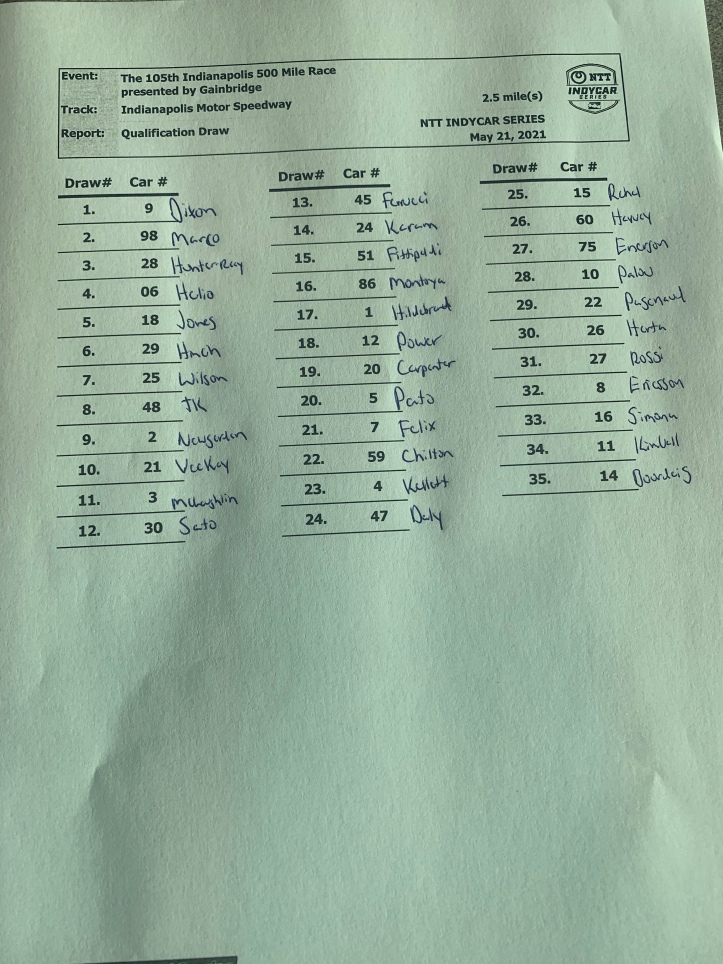 While you don’t have to qualify during your place in line, most will go through once to get to 35 cars gone for 33 spots. That then can give you an idea on what to change on your car for another run once the line goes through once.

In the past, each car only got three attempts to qualify. These days, those attempts are unlimited. So, no matter what spot that you’re in, you could always requalify. In saying that, it comes with a caveat.

Some may wonder, why risk that? Why even go back out to requalify? Well, the Fast Nine will requalify on Sunday for a shot at the pole. Why not try and position yourself in the Fast Nine and give yourself an opportunity to win the pole a day later?

Plus, starting position matters here again. The last three years, the winner of this race came from the front row. All the drivers have said this month that the front 3-4 cars can pass with ease but those 5th on back are basically stuck in the dirty air. That’s why getting into the Fast Nine is key.

The other end of the spectrum is that spots 10-30 are set. You want to at the very least be in the top 30 because 31-35 will have to requalify again on Sunday and among those five, two of them will go home and not make the show. So, most will try the regular lane to not give up their time, but if you’re on the bubble of each or even the outside looking in from 31st-35th, why not just give up your time and try again in the fast lane?

We’ve seen guys really risk it by going to the fast lane and already have a good spot already. The problem is, if you crash, you lose it all and would likely be in the bottom five at that point with no time.

That’s why this will be a fun full day of action on Saturday to get the field provisionally set because you get unlimited attempts and every ounce of track will be used in getting there.