Who Wins Sunday’s Firestone Grand Prix of St. Pete (12 p.m. ET, NBC, INDYCAR Radio Network) that plus all the information you need

ST. PETERSBURG, Fla — The million dollar question leading into Sunday’s Firestone Grand Prix of St. Pete (12 p.m. ET, NBC, INDYCAR Radio Network) is, who’s going to win the second race of the 2021 NTT IndyCar Series season. Before we get to that, let’s get to the details for the race itself. 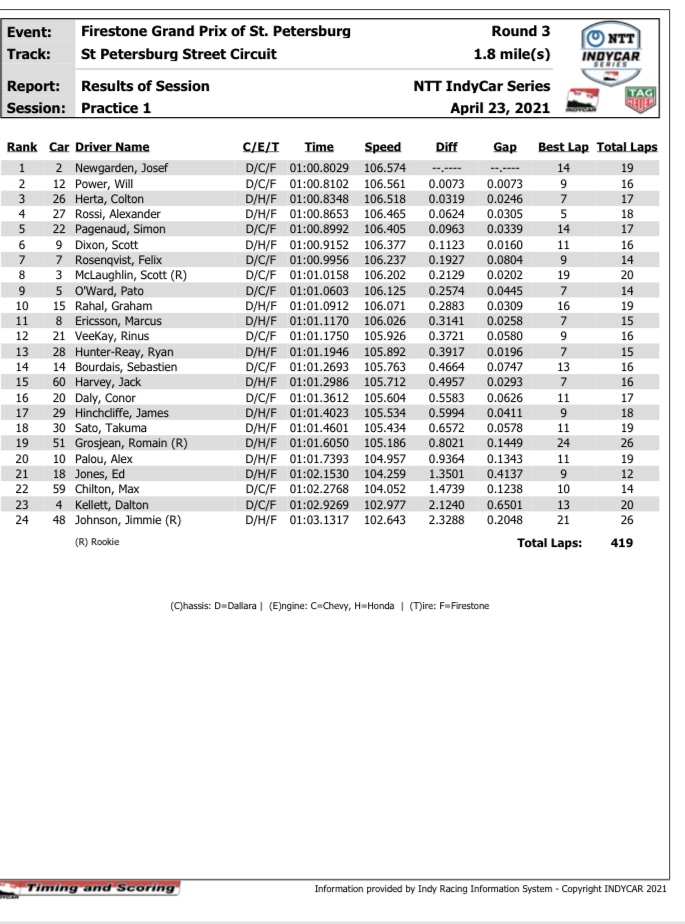 Well, the trends say anyone coming from the top 5 Rows on Sunday will end up celebrating in victory lane. 14 of the 16 INDYCAR races on the streets of St. Pete have seen the eventual race winner come from a top 10 starting spot. Plus, 12 of the 14 races last year saw the winner come from a top 10 starting position. We’re 1-for-1 this year with Alex Palou starting third and winning last Sunday in Barber.

A reason for this trend is exactly half of the last six INDYCAR races overall went from green flag to checkered flag without a caution. In fact, there were 2 or fewer in 10 of the last 12 series races overall. In terms of St. Pete, we’ve had 2 or fewer cautions in 3 of the last 5 years. That in turn negates most of the pit strategy of possibly flipping the field due to an ill timed caution or at the very least lessens the prospects of one occurring. It can happen, which is what helped Bourdais recently, but there’s a better chance of it not.

Now, lets narrow it down even more.

11 of the last 15 race winners at St. Pete started in the top five but out of those four that didn’t, all came in the last five years. So, is it better to start between 6-10th rather than 1st-5th?

The top three starters won 9 of the 14 races run last year including 8 of the final 9. Combine last Sunday, that’s 10 of the last 15 races run being won by someone coming from the top 2 Rows. 5 of the final 6 races last year were won from the front row at that. The only one not?

Just twice has the pole winner won at St. Pete, the last one coming in 2010. That doesn’t bode well for Herta who earned the pole on Saturday, but Herta has been fast this weekend in being third and fourth respectively in the two practice sessions too. Plus, among Herta’s three career wins, all came while starting from the pole, including all three coming consecutively.

The only two times that Herta won a pole and didn’t win the race came in 2019 at Road America and Portland. He’d finish eighth and fourth consecutively in them though.

So, the winner is….I’ll buck some of the trends and go with Herta.

The top 5 finishers according to the trends: