INDIANAPOLIS — Juan Pablo Montoya showed his talents over the past couple of days. The Colombian driver, despite not having been in an Indy Car in five years, went P3 on the overall speed chart during the NTT IndyCar Series’ two-day open test at the Indianapolis Motor Speedway. Montoya, turned 183 laps the last two days, with a top speed of 226.123 mph in his No. 86 Chevrolet.

While the speed was noticeable, Montoya admitted that it wasn’t as easy inside of the car as it looked.

“I felt okay. I didn’t feel as good as you said. It’s great that it looks like that.,’ Montoya said following the lengthy session on Friday. “I did pass few cars and everything, I could move, I could change, I felt pretty decent at parts.

“As you go through those things, there’s some runs that you go out there, you’re just in the way, and you hate it. I said like three times today, Hell, I’m not doing this. Actually the word wasn’t ‘hell’ but I’m using the polite word. I said, I’m not doing this and I bailed.

“One of them actually bailed and really scared the hell out of me in three and four. I lifted and I didn’t even do turn one. I went in the deceleration lane. I’m not doing this (laughter).” 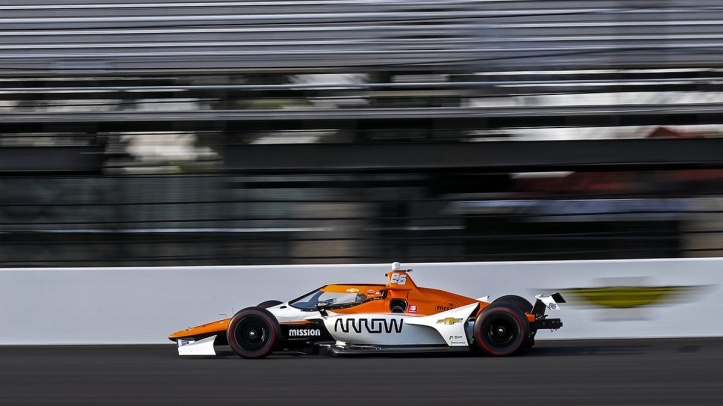 Good thing he is though. Montoya, is picking up where he left off when he last left the series in 2017. See, Team Penske was starting an IMSA program for 2018. They downsized their Indy Car operation as a result and Montoya was a casualty of that. So, off to sports cars he went without a chance to come back. He said that Zak Brown with Arrow McLaren SP called him the last few years, but Penske vetoed Montoya racing at Indy for another team.

But, with Penske shutting the doors of the IMSA program at the end of 2020, it left Montoya free to look elsewhere. So, when Brown called this offseason, this time Montoya could say yes.

Now though, a lot has changed since the last time he’s been in Indy Car. For starters, there’s a new car. This is a completely new chassis with a new aero configuration with a considerable amount of downforce taken off.

“They’re a little harder to drive, I think,” Montoya said of this car in comparison to the one in 2017. “I think the difference between clear air and dirty air is a little bigger. I think the changes from what INDYCAR did, from what everybody says, it’s a little harder as before, but not that bad. Put it that way.

“After running today, I would be a big fan of that ‘push to pass’, to be honest.”

Another thing that’s changed is there’s an Aeroscreen now. That though was a little more easier for Montoya to adapt to. That’s because he is coming straight from a sports car and a closed cockpit car. For him, it’s the same thing he told me.

“It doesn’t really change that much,” Montoya said. “I think for the guys that are used to the open cockpit, might be a little harder.

“It wasn’t too bad to get used to it. I thought it would be a little more intrusive. It’s definitely a pain in the butt to get in and out of the car, and it’s a lot hotter. I know like here it hasn’t been that bad in the oval. I did a test in Laguna. In a road course, you don’t get a lot of air. That was kind of shocking.

“Yeah, I mean, it’s kind of weird because, like, you’re really in a little bubble. It feels a little bit once you’re driving like a sports car.

“But you’re with a closed visor, I still don’t get why you have to run — I don’t think you have to. I think you probably do, but I’m used to sports cars. Same thing you’re with the visor open so you get a little more air.

“It’s good. It’s fine. I think from the safety point of view, it’s a great thing. It’s a matter of getting used to it more than anything else.”

Montoya is searching to become just the second driver to win this race for three different teams. His first victory came back in 2000 with Chip Ganassi Racing. His next win came in 2015 with Team Penske. Can get score his third Indy 500 triumph with Arrow McLaren SP?

That would be an impressive feat. Montoya, has four top six results in five Indy 500 tries.