DAYTONA BEACH, Fla – The field for the 63rd annual Daytona 500 is now set. 40 drivers enter, one will be left standing in racing supremacy.

Before we get to the starting lineup, here’s my takeaways from Thursday nights Duels in Daytona.

Both Duels had their good moments, tame moments and wild moments. In the end though, we were treated to equally close finishes. Aric Almirola topped Christopher Bell by just .041 seconds in Duel 1 while Austin Dillon beat Bubba Wallace by .057 seconds in the second Duel.

Ryan Preece needed points. With losing his charter this past offseason and wanting to score as many points as possible early on in order to help alleviate some of the pressure facing him this season, he knew that it was all points all the time. That includes stage points. He said this past week that they’d normally race conservative in the Daytona 500, but this year they couldn’t afford to do so. They need the points.

Well, that’s how he had extra motivation to score points during the Duels instead of just keeping his car clean and falling back on his speed from qualifying. See, Preece already had a spot in Sunday’s Daytona 500. He came here not knowing or not if he would, but by being the top speed among the eight open cars in Wednesday night’s qualifying allowed Preece to take one of the two guaranteed open spots on speed.

He didn’t have to do anything in his Duel. Instead he did. He rode around near the back all race and pounced in the end. Preece, went from 11th to eighth to finishing fifth by inches over Ty Dillon.

By doing so, he gained six points. He also knocked Dillon out of the open spot to race their ways in and instead he took it. That allowed the speed car from qualifying to go to David Ragan and now Austin Cindric. As a result, it knocked Dillon out.

The decision to award points helped shaped this ending.

123 laps of racing and we ended up with the same four open drivers from Wednesday night’s qualifying round to make this weekends Daytona 500. How they got there though was nothing short of dramatic.

Ryan Preece and David Ragan each made their ways into the Daytona 500 on Wednesday night by virtue of their qualifying effort. Normally, these drivers just stay out of the way in the Duels to keep their cars in one piece for the Daytona 500.

That didn’t happen on Thursday night.

Preece, wanted those bonus points and he went for a win. He’d finish fifth in the first Duel.

Ragan, tried to stay out of the way, but with Garrett Smithley and Noah Gragson both getting collected in a crash, that allowed Ragan to be the top open finisher too allowing both Austin Cindric and Kaz Grala to get the two open qualifying spots to fall back on speed.

I thought Hendrick Motorsports would have a say in who wins at least one of the Duels on Thursday night. They’d won 16 times in this event but were shutout despite having the pole in both races. Now, they have to be nervous heading into Sunday’s race.

Alex Bowman’s car was a misfire from the beginning. He battled a vibration and pitted multiple times to no avail. They couldn’t figure out why his No. 48 Chevrolet was vibrating so bad. He’d finish four laps down as a result.

Without Bowman, Kyle Larson kept it conservative and finish seventh.

In the second Duel, William Byron proved for a majority of it that he had a car to beat not only in the Duels, but for the Daytona 500 as well. Byron, was good on the low line and the high line. He was good in the draft and great in front of it. He looked like the class of the field tonight.

Byron, was in the lead in the late stages but I questioned why. He showed me and I’m sure themselves enough. With 10 to go, why stay out front and take a risk? Yes, points and a race win were on the line, but keeping this car intact had to have more importance.

Byron, was shuffled out of the lead, then consequentially caught up in the Lap 56 “Big One.” His No. 24 Chevrolet was destroyed.

It appears now that he would more than likely have to go to a backup car after leading a race-high 34 laps.

Bowman’s mechanical problems and Byron’s crash give HMS some worry heading into the Daytona 500.

Coming into this year’s Speedweeks’, since 2005, Hendrick, Gibbs and Penske cars had combined to win all but 17 races during Daytona Speedweeks. Furthermore, they’ve won all but five races since 2013 at Daytona in February. They were clearly the ones to beat on Thursday night.

Between the trio of teams, they had won 14 of the last 15 Duels in Daytona. Hendrick has six trips to victory lane in this race since 2013, Gibbs five and Penske three. 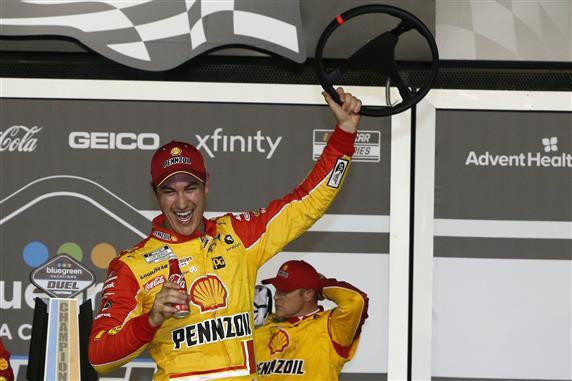 HMS also has a record 16 total Duel victories, 11 since 2005 and at least one Duel win in five of the last six years entering 2021. They were the favorites to take a win with the pole in both races.

So was Penske. They’ve got five Duel wins overall, three of which since 2013, but all three coming in the last three years consecutively. Ryan Blaney won for Penske in 2018 and Joey Logano in each of the last two years himself. Brad Keselowski has actually never won a Duel before.

JGR had Denny Hamlin landing in victory lane twice since 2014 and Kyle Busch as many times since 2013. But, they’ve not won a Duel since 2017 though as its being all Penske/HMS since.

Kevin Harvick in 2019, Aric Almirola and now Austin Dillon are the lone exceptions.

This has a HMS/JGR/Penske showcase as of late. SHR and RCR have now joined the party.

Starting Positions Mattered Again, How They Could Matter On Sunday As Well

Normally, starting positions for a superspeedway race is just a number. When cars are running in a pack, inches from each other while also drafting with one another, why does it matter where you come from? Well, what if I told you that eight of the last nine years have seen the Daytona 500 winner come from the first 7 Rows? In fact, its actually happened 10 times since 2008 at that.

That means you need to finish in the top seven of your Duel on Thursday night in order to have the best chance of winning on Sunday evening.

The weird thing is, since 2001, we haven’t actually seen the Daytona 500 winner come from the front row though. That’s not good news for Alex Bowman or William Byron.

So, being on the pole may not lead to success for the Daytona 500 nor the Duels, but a top seven finish in the Duel race itself might.

Also, starting spots in the Duels showed to actually matter again too. Aric Almirola started second to become the first driver in the last eight Duels to come from the front row. Still, the last 12 Duel winners started in the top eight. In fact, 15 of the last 16 have started in the top 10 including 13 straight from the top 4 Rows.

Aric Almirola is eyeing on keeping the Tampa theme going. He won his Duel on Thursday night and was third fastest in qualifying on Wednesday night. He led a race-high 52 laps in his win during his Duel and now enters the Daytona 500 with one win, three top five finishes and six top 10’s in his last 12 starts on superspeedway’s.

Joey Logano finished fourth in his Duel. It ends a two year streak of Duel wins but extends his streak though to seven as in seven straight top eight finishes. Furthermore, he’s actually finished in the top four in eight of the last nine years. He does that after earning his ninth straight Clash top 10 finish including seven of which resulting in a top three on Tuesday night. Logano, will roll off seventh in the Daytona 500.

Ryan Newman had himself a great night too. Newman, finished third and will roll off fifth on Sunday. He’s actually had two top five finishes and eight top 10’s over his last 12 starts on superspeedway’s. He’s also had seven top 10’s in his last nine starts on them overall including 16 top 11’s in his last 20.

The Duels have held quick races lately. 10 of the last 11 Duels have run to completion in less than one hour including 16 of the last 19. In fact, the longest Duel since 2009 lasted 1-hour, 8-minutes and 25-seconds.

This year we saw the first Duel run in 46-minutes and 53-seconds with the second one in 59-minutes and 45-seconds.