For the first time ever, qualifying to set the front row for the Daytona 500 as well as also the customary starting lineups for the annual Duels at Daytona will be held in primetime. NASCAR and the Daytona International Speedway has altered the Speedweeks schedule for this year’s edition. The changes though actually had nothing to really do in regards to the pandemic as these radical changes were made prior to COVID being around.

The Busch Clash was moved from the oval to the road course layout and changed from the weekend preceding the Great American Race to Tuesday night of race week. In turn, qualifying for this year’s 63rd running of the Daytona 500 was then moved from Sunday to Wednesday night (7 p.m. ET, FS1, MRN).

The qualifying format itself doesn’t change as we’ll have 44 drivers going for 40 spots into Sunday’s field. While it’s nothing glamorous in terms of qualifying for the ‘500 with only single car runs and just the front row being set, it’s still big for the teams as this rewards the offseason hardwork back in the North Carolina shops.

The drivers will tell you, qualifying at the Daytona International Speedway doesn’t have much to do about their skillset. It’s all about the teamwork in the offseason and engine department. The only thing the driver can do is screw it up says Alex Bowman.

William Byron says that it’s 90-10 in terms of 90% car and 10% driver for what you can get out of Daytona qualifying.

In terms of what happens for the format, when the last car takes their time, the odd cars (pole, 3rd fastest, 5th fastest, 7th fastest, etc) on the speed chart will start in the first race of Thursday night’s Duels. The’ll line up in order that they qualified in the sense that the quickest car on Wednesday will be on the pole for Duel 1. The third quickest car will start second. The fifth and seventh fastest cars from Wednesday will share Row 2 and so forth.

The even cars on the speed chart will start in that order for the second Duel.

So, who wins the pole?

Pole Favorites? Watch Out For The Bowties

There’s one lone practice session that will take place earlier in the day on Wednesday, so it’s going to be hard to accumulate enough data from that. A day time practice for a day time race this weekend with night time qualifying.

The easiest favorite for the pole will be a manufacturer in Chevrolet. The bowties have won eight straight Daytona 500 pole and 13 of the last 15.

Hendrick Motorsports has to be the favorites among the Chevy camp as they’ve won five of the last six poles. Ricky Stenhouse Jr. with JTG Daugherty Racing won last year’s pole while Jeff Gordon started the streak in 2015. Chase Elliott won the pole in 2016 and again in 2017 followed by Alex Bowman in 2018 and William Byron in 2019.

But, we’ve also had our fair share of conspiracy theory Daytona 500 pole winners as well though. Danica Patrick became the first woman to win a Cup pole for the 2013 race. Austin Dillon won the pole a year later in the return of the famed No. 3 Chevrolet. It was the first time since the 2001 Daytona 500 that the car number was back in a Cup race and here it was on the pole. Jeff Gordon won the pole a year after that in what was his final Daytona 500 start. Chase Elliott became the youngest Daytona 500 pole winner a year later as he replaced Gordon in the No. 24 Chevrolet starting that season. He’d win again in 2016. For 2018, Alex Bowman won the pole in his first year of replacing Dale Earnhardt Jr. in the No. 88 Chevrolet. The last two years were less conspiracy though with Byron and Stenhouse.

Will it return this Wednesday?

If so, Kyle Larson (HMS) or even someone like Bubba Wallace with the new Michael Jordan/Denny Hamlin team could certainly make it an interesting storyline for a front row start for either in the leadup to Sunday’s Daytona 500. 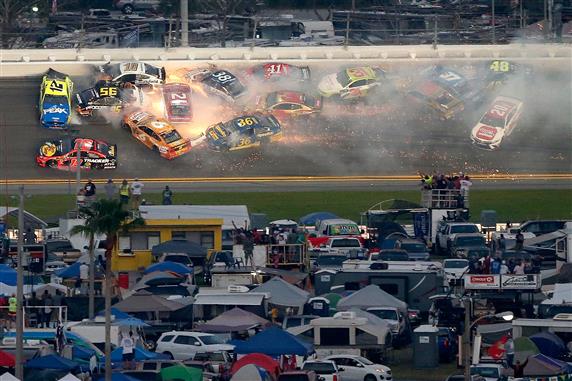 Now, this potential pole though does come with a caveat. The last driver to win the Daytona 500 from the pole was Dale Jarrett in 2000. The last pole winner to even nab a top five finish was Bill Elliott in 2002. The pole winner for the Daytona 500 has failed to score a top 10 finish in 16 of the last 19 years in fact. Their average finishing position?

Its not like the second starting spot is that much better. Their average finishing position in the big race? 16th too.

Just six times in the last 25 years has the second place starter came home with a top five finish in the Great American Race.

So, while the distinction of being a front row starter for the ‘500 is great an all, it hasn’t translated much into success a week later.

Prior to 2010 though, the pole speeds didn’t get out of the 180’s for nine straight years.