INDIANAPOLIS — The driver lineup for the 2021 NTT IndyCar Series season is pretty well finalized now. There are obviously a few short items left to check off the old box, but with the recent announcements as well as reading the writing on the wall, the full time seats are pretty much solidified at this point with the exception of maybe one.

With Andretti solidifying their lineup in the last couple of weeks and the Coyne/Vasser Sullivan entry figured out with Ed Jones, just Dale Coyne Racing and Carlin each hold the keys now to both of the open rides available. But, the Carlin seat is part time though.

It also appears that Rick Ware Racing will have a full season program and all signs are pointing to Pietro Fittipaldi driving their No. 51 Honda as well. The question is, will this be in partnership with DCR again, and if so, is this in addition to their two car program or part of their two car program meaning the seat in the No. 19 Honda is either open or maybe it isn’t?

2021 is going to be amazing… pic.twitter.com/3eoRAq6gUv

As far as Fittipaldi, his tweet last Friday morning reveals that it could be him driving that car this season.

If it’s in conjunction with DCR, then this could be the second seat and no one else is needed. They’d be set. It could also be a third seat with DCR and leave that 19 seat open too or entirely separate.

As far as who Jones’ teammate will be, Coyne says that he hopes to announce that next week. Is there a potential to be a second car (No. 19) not related to RWR and it be Romain Grosjean?

“You all could make a list of a hundred drivers, we’ve talked to probably every one of them this winter,” Coyne said of Grosjean for the second car. “Employed, unemployed, America, Europe, every country. It’s been kind of amazing.

“Obviously Romain is a good driver. We’d love to have him. We’re working on a few other ones as well. Hopefully we get all that buttoned up and make an announcement next week and then get out to testing in February.”

Grosjean, has no interest in the ovals, so if he does race in that second car, then four races are available for the taking. 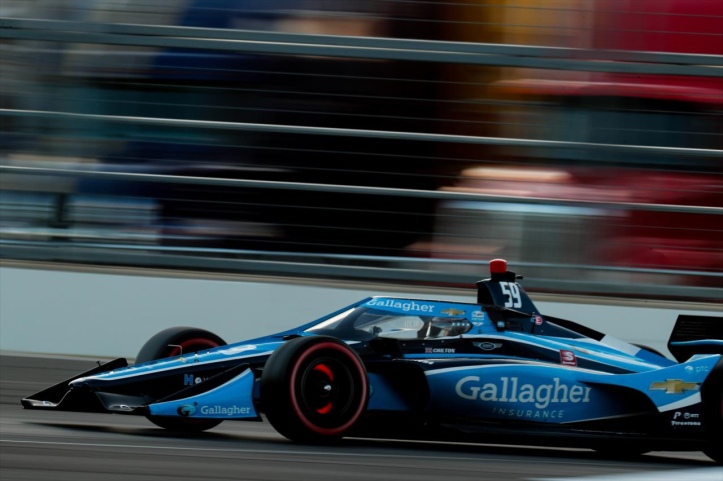 Carlin, has the only seat left but it’s on a part time basis. It’s for three oval races only since Max Chilton will do the road/street courses as well as the Indy 500. Conor Daly or Charlie Kimball are the favorites for that seat.

The rest is history unless Carlin elects to bring out the second car again.

Now, lets also look back at to what’s been done already during this past offseason in terms of silly season movement.

Dalton Kellett signed on to drive the No. 4 Chevrolet for AJ Foyt Racing in 2021. He moves up from part time to full time and joins Sebastien Bourdais with the team. Conor Daly will be back with ECR for a second go around as he will take on the road/street courses as well as the Indy 500 in a third car while Ed Carpenter drives the ovals only. Defending series Rookie of the Year Rinus VeeKay has also agreed to a contract and will stay put with the team for a second straight year in the No. 21 Chevrolet.

Team Penske will expand from three to four full time cars with Scott McLaughlin joining Josef Newgarden, Will Power and Simon Pagenaud with the team.

Chip Ganassi Racing also expands to a fourth car with a shared Jimmie Johnson and Tony Kanaan entry (No. 48 Honda). Marcus Ericsson is back. As is defending champion Scott Dixon. While Felix Rosenqvist does depart to Arrow McLaren SP, Palou replaces him in the No. 10 Honda.

Graham Rahal and Takuma Sato are back with RLL. Meyer Shank Racing will expand to a second car for six races and have Helio Castroneves in it.

Colton Herta shifts from the 88 to the 26 Honda in replacing Zach Veach. Hunter-Reay and Hinchcliffe join Herta and already under contract Alexander Rossi at AA.

The rest is done.

Carlin (1) – Max Chilton road/street courses only (No. 59) the oval seat is open