Who Are The Favorites?

The “Big 3” in NASCAR are typically the only ones to beat during Daytona Speedweeks. Since 2005, they’ve won 47 times in NASCAR Cup Series action alone at Daytona. That’s a 73-percent success rate. That’s huge, especially for a superspeedway track. Furthermore, they’ve also won 28 of the last 33 Daytona Speedweeks races in Cup competition overall.

In the Busch Clash, they’ve won 13 of the last 16 years on the oval. The only driver not of those camps to win since 2005 is Kevin Harvick. All three of his wins came with Richard Childress Racing.

For the Daytona 500, they’ve won six of the last eight. Looking for a favorite? Start here.

How Will The Race Look?

Will Sunday produce as much carnage?

The last two Daytona 500’s were fairly tame until the end in which chaos erupted often. I think this year’s will look the same to be honest. The drivers are all jacked ready to go but they also know that in order to win, they have to be there in the end.

This year won’t be any different. But, once you get to Lap 150…all bets are off.

It should lead to a wild finish though too. Four of the last five Daytona 500’s have seen a last lap pass for the win. Denny Hamlin stormed through the pack and passed his teammate Matt Kenseth for the lead in Turn 4 of the final lap in 2016 and held off a hard charging Martin Truex Jr. for the victory.

In 2018, Austin Dillon crashed Aric Almirola on the backstretch going for the win.

Last year, Hamlin did it again with a last lap pass of Ryan Newman and Ryan Blaney for the victory.

Will we see another last lap pass for the win on Sunday? Trends say, yes. So does the recent history of the end of these superspeedway races.

The new package will likely promote a last lap crash as the second place car will have to make a daring move to win. We’ve seen that more times than not.

Last year, Denny Hamlin became just the fourth driver to win back-to-back Daytona 500’s. Richard Petty did it in 1973 and 1974. Cale Yarborough did it in 1983 and 1984. Sterling Marlin was the last to do so in 1994 and again in 1995. The odds don’t look favorable for Hamlin to repeat on Sunday again though as no driver has ever won this race for three straight years before.

Can Elliott Get His 1st Daytona 500 Crown?

This is Chase Elliott’s NASCAR now. He won the last two Most Popular Driver awards before winning that and a championship in 2020. Now, can Elliott keep this up with a Daytona 500 win on Sunday?

Elliott, has made five starts in this race with finishes of 37th, 14th, 33rd, 17th and 17th respectively. He was runner-up in last August’s Coke Zero Sugar 400 though, so there’s reason for hope. But, only five times has the reigning Cup Series champion came down to Daytona the next February and actually won the Daytona 500. The last time that it actually happened was in the year 2000. Its only happened twice since 1978 overall.

Is It Kyle, Brad Or Martin’s Turn For A Daytona 500 Victory?

Among the drivers in this year’s field, only six drivers have actually won this race. But, three stand out among the winless – Kyle Busch, Brad Keselowski and Martin Truex Jr.

All three are champions of the sport, but all have also been shutout of Gatorade Victory Lane.

Truex, is 0-for-16. He’s not much of a superspeedway racer anyways but he’d love to get a win here more than ever. He only has five career top five finishes in 62 points paying superspeedway starts. He’s had seven finishes of 18th or worse in his last 11 Daytona starts. 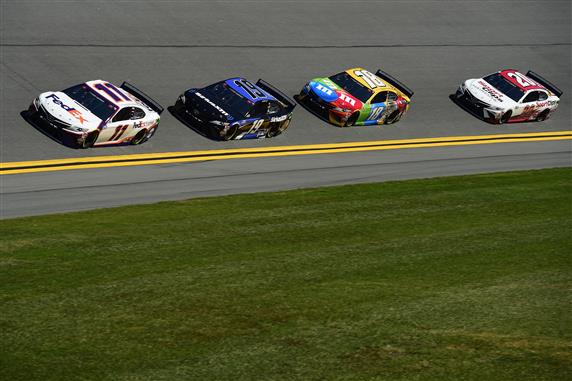 Busch, is 0-for-15. He’s finished 20th or worse in his last eight Daytona tries including a 34th place effort in last year’s race.

While leading on Lap 180 in 2020’s edition, his car started having problems. A lap later, Busch said his engine blew and would slowly ride around the track. That was partially a blessing in disguise as he avoided the Lap 183 “Big One” two laps later.

“We’ll just keep going down in history of figuring out new ways to lose it,” Busch said last year.

He did finish runner-up though in 2019 and third in 2016, but the rest of his results haven’t been all that great. 11 of his 15 Daytona 500 starts have seen him finish 14th or worse. Eight of those 11 were 23rd or worse including six of his last eight seeing him finish 19th or worse.

For Keselowski, he’s 0-for-11. What’s strange about that is, Keselowski is known as one of the better superspeedway racers in the series. His six wins on them rank him first among all active drivers right now. If things go his way and he avoids the “big ones” and can be there in the end, he most certainly would be pushing double digits in the win column.

“That’s been the hardest part for me,” Keselowski said in 2019. “I feel we’ve been good enough to win it multiple times.  We get caught up in somebody else’s wreck or problem.  I think you see that a lot.

“Besides the luck factor, first things first, you got to be running at the end of that race.  For whatever reason, I think maybe because it’s the first race of the year, maybe because it’s one of the biggest races of the year, I’m not entirely sure, but the Daytona 500 has traditionally been a race of very high attrition.  Getting to the end has been very difficult for us.

“It’s probably kept us from winning it at least once or twice because, like I said earlier, I think we’ve had the car to do it.  I think that’s a big part of why it’s so hard to win, the attrition factor, just surviving it to begin with.

“Again, of course, it is a difficult racetrack.  This time of year, Florida is a lot hotter than most parts of North America, but this time of year it seems to be one of those racetracks that you practice and you qualify, then the race day, for whatever reason, the track temp goes way up, the cars slide around a lot more, chaos ensues.  Trying to survive to the end for me is the biggest part.

“The races we have survived till the end, we have ran really well and been in a position to win.  Hopefully that’s the case for us this year.  I feel confident if I can be there at the end, we can win the race.”

Despite saying that, they’ve struggled during Daytona Speedweeks though.

Keselowski for example, he’s had 30 career Cup Series starts during Speedweeks. In those races, he’s won just once. That came in 2018 in the Clash. In those 30 overall races, he only has six top five finishes in them, three of which coming in the Clash alone. In 10 of his 30 races, he’s finished 20th or worse.

He just doesn’t have the results or luck at that.

“It’s something I thought a lot about,” said Keselowski. “There’s a couple thoughts on my mind.  Before last season I had never really won a major NASCAR race.  I won the championship, done a lot of those things, which is certainly great.  I hadn’t won a major.  Last year (2018) after winning Darlington and Indianapolis, gosh, the thrill from that.

“But Daytona is, of course, the 500, one major I don’t have.  I feel like it’s a race we’ve been competitive at.  We had opportunities to win it.  For a number of reasons, it hasn’t come together, which is sometimes unsettling.  People ask me all the time, What race is the one that got away?  It’s the 500, has been so far.  I want to change that.

“Opportunities are in front of us.  I feel like if I could win the Daytona 500, it would be the biggest win of my career.  I’m ready to do it.  I still have a good understanding of what it’s going to take to do it.  It’s just a matter of kind of putting the whole race together from my perspective, from the team’s perspective as well, then not having any bad luck.”

Other than the Clash, he’s struggled during Speedweeks.