This seems like an annual topic of conversation but the “Big 3” in NASCAR are typically the only ones to beat during Daytona Speedweeks. Since 2005, they’ve won 46 times in NASCAR Cup Series action alone at Daytona. That’s a 73-percent success rate.

But, now that the 2021 Speedweeks edition is about to end, can the “Big 3” dominate once again?

Denny Hamlin has won the last two Daytona 500’s and three of the last five at that.

Can they continue the dominance with another ‘500 triumph on Sunday?

HMS has had bad cars in the Daytona 500 recently. For some reason, they just haven’t had the grip levels to contend. Their cars are wrecking loose.

They’ve only won two of the last eight Daytona 500’s and those came back in 2013 and 2014. They are one win shy though of tying Petty for most Daytona 500 victories overall for an organization at nine.

JGR has four Daytona 500 triumphs with three going to Hamlin. All since 2016 at that. Penske won the Daytona 500 in 2015 with Logano but nothing since either though.

In the Clash, they’ve won 13 of the last 16 years on the oval. The only driver not of those camps to win since 2005 is Kevin Harvick. All three of his wins came with Richard Childress Racing.

Overall, they’re the ones to beat. Will it remain that way to close out this Speedweeks?

Can RCR Or SHR Steal Another Win

While talk of the “Big 3” is evident during Speedweeks, don’t overlook the next duo that could challenge Gibbs, Penske or Hendrick for supremacy on Sunday. Since 2013, there’s been 40 Cup Series races run at the Daytona International Speedway. Yes, JGR, Penske and Hendrick have won 33 of them. Yes, that gives them a 83-percent chance of winning Sunday’s Daytona 500. But, out of the 10 races that they haven’t won Richard Childress Racing and Stewart-Haas Racing has won seven of them including both Duels on Thursday night.

In 2019, Kevin Harvick gave SHR their first Duels win in the last eight years. It was also just their third career Speedweeks victory overall as Tony Stewart won his Duel in 2012 and Kurt Busch winning the Daytona 500 in 2017 too. In the first Duel, Aric Almirola won this past week to give them their sixth total DIS victory. The other two cam via Stewart in the annual Coke Zero Sugar 400. 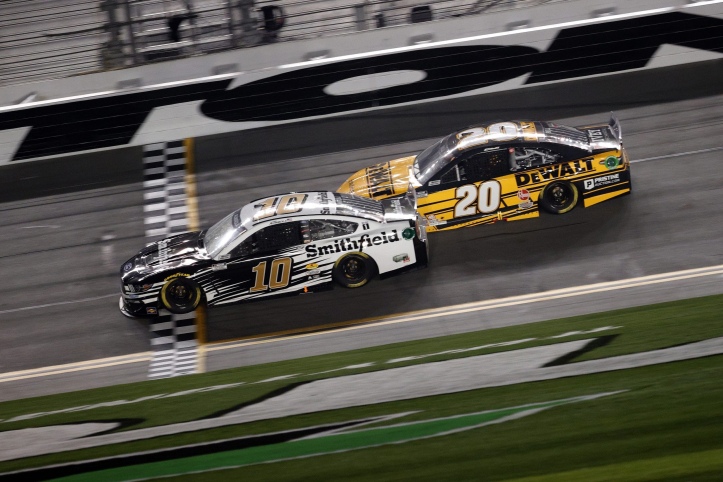 But, for them to have won three in the last four years at Daytona when the “Big 3” have been hogging victory lane is noticeable. Plus, they have four cars in their fleet to challenge for a win this weekend.

But, Austin Dillon’s 2018 Daytona 500 and second Duel win on Thursday gives them hope. So does the fact that they massively took a step forward in 2020 and should vie for a playoff berths again in 2021.

Other than that, the only other three organizations to have won a race in NASCAR’s premiere series at Daytona since 2013 was Richard Petty Motorsports (Aric Almirola) in the 2014 ‘400, Roush/Fenway Racing (Ricky Stenhouse Jr) in the 2017 ‘400 and Spire Motorsports (Justin Haley) in the rain shortened ‘400 in July 2019.

Four of the last five Daytona 500’s have seen a last lap pass for the win. Denny Hamlin stormed through the pack and passed his teammate Matt Kenseth for the lead in Turn 4 of the final lap in 2016 and held off a hard charging Martin Truex Jr. for the victory.

In 2018, Austin Dillon crashed Aric Almirola on the backstretch going for the win.

Last year, Hamlin did it again with a last lap pass of Ryan Newman and Ryan Blaney for the victory.

Will we see another last lap pass for the win on Sunday? Trends say, yes. So does the recent history of the end of these superspeedway races.

The Clash albeit on the road course, saw a last lap pass for the win, so did both Duels on Thursday as well as the Truck race on Friday night as well.

The new package will likely promote a last lap pass as the second place car will have to make a daring move to win. We’ve seen that more times than not.

Daytona is always Daytona in terms of chaos. The last four years of Cup races though from the World Center of Speed have been complete mayhem. In the 2017 Daytona 500, 34 of the 40 cars that started were involved in some kind of wreck throughout the afternoon. The 2018 Daytona 500 saw 31 of 40 cars crash. The July race that year had 34 of 40. The Clash in 2019 saw 17 of the 20 cars leave with damage while the 2020 Clash saw all 18 starters collect some sort of damage during the all-star event.

Will Sunday produce as much carnage?

But, with this new package that’s just a couple of years old, it’s created more carnage at the end of races.

The last two Daytona 500’s were fairly tame until the end in which chaos erupted often. There’s a reason for that.

“The only race that’s bigger than this is the championship race and that’s only for four cars,” said Joey Logano. “This is the biggest race for 40 cars. Everyone is out there racing extremely hard towards the end of the race. The pushing and shoving becomes very aggressive which that has been consistent over the years but with the rules package change, especially with the spoiler on the back of it, we’ve seen over the past couple of years that the shoving has become really aggressive and the blocks have been harder to pull off successfully. The runs are bigger. That’s all a recipe for disaster for the end of these things. The key is to be up towards the front when it matters the most.

“At the end of the race, it’s kind of like the championship. No one remembers who finished second. No one knows who finishes second in the Daytona 500 last year. That’s just what this race is about.”

His teammate Brad Keselowski agreed. He at one point was the top dog on superspeedway’s but with this rules package, his advantage was lost.

It’s harder to lead. You’re essentially a lame duck. The runs are larger so it’s as Logano says harder to block or cut the air from the cars around you. In turn, you typically go to Daytona and even Talladega expecting to crash. The odds are more favorable for carnage than a win.

What impresses Keselowski the most is that Denny Hamlin has won three Daytona 500’s in the last five years. The odds are that you’ll get caught up in someone else’s wreck, so to have won that many times is amazing to him.

Leading The Most Laps Doesn’t Equate To Victory

Yes, two of the last four years the winner only led one lap – the last one.

Ryan Blaney’s 118 laps led in 2018 was the most prolific time out front in the race since Davey Allison led 127 laps en route to the 1992 winner’s trophy. Since then, Blaney is the only driver to lead 100 laps or more since Tony Stewart led 107 laps in 2005. Both Blaney and Stewart finished seventh in those races. 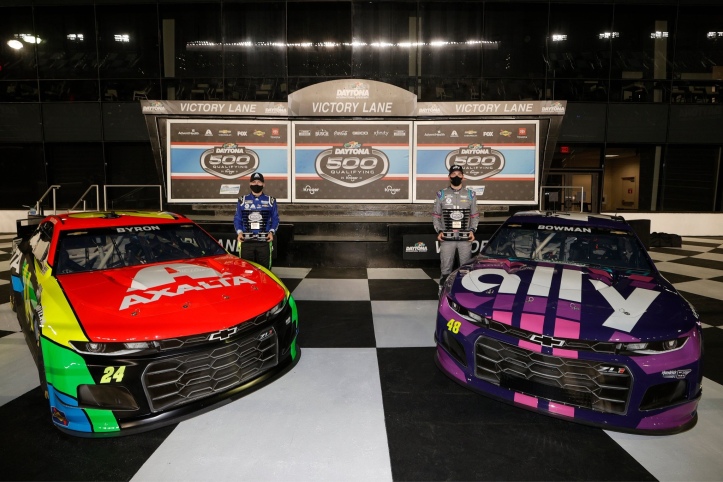 What about the outside front row starting spot. The last win came in 1993 (Dale Jarrett). They have only finished in the top 10 just four times since 2006.

Only six times has the Clash winner won the Daytona 500. The last time was Denny Hamlin in 2016. Before him, it hasn’t happened since 1998.

Moral of the story here is, any Speedweeks success before the Daytona 500 really means a win isn’t coming in the biggest race of the week.

Last year, Denny Hamlin became just the fourth driver to win back-to-back Daytona 500’s. Richard Petty did it in 1973 and 1974. Cale Yarborough did it in 1983 and 1984. Sterling Marlin was the last to do so in 1994 and again in 1995. The odds don’t look favorable for Hamlin to repeat on Sunday again though as no driver has ever won this race for three straight years before.

Can Elliott Get His 1st Daytona 500 Crown? Defending Cup Champion Also Not Likely To Win ‘500

This is Chase Elliott’s NASCAR now. He won the last two Most Popular Driver awards before winning that and a championship in 2020. Now, can Elliott keep this up with a Daytona 500 win on Sunday?

Elliott, has made five starts in this race with finishes of 37th, 14th, 33rd, 17th and 17th respectively. He was runner-up in last August’s Coke Zero Sugar 400 though, so there’s reason for hope. But, only five times has the reigning Cup Series champion came down to Daytona the next February and actually won the Daytona 500. The last time that it actually happened was in the year 2000. Its only happened twice since 1978 overall.

First-time winners are rare in the Daytona 500

Though it is rare, it still happens from time-to-time.

Of the 62 Daytona 500 races, only seven times has a driver posted his career-first NASCAR Cup Series victory with a win in the event; the most recent to accomplish the feat was Trevor Bayne in 2011.

Derrike Cope, won his first Cup Series race in the 1990 Daytona 500, and he will be competing this weekend in the Rick Ware Racing No. 15.

This weekend, 20 different drivers entered in this season’s Daytona 500 are still looking for their first NASCAR Cup Series victory.