F1 in an interesting predictiment now

The 2020 F1 season will conclude this Sunday in Abu Dhabi. Kudos for them for joining the list of other sports to figure out a way to start and finish a season in the midst of a global pandemic. But, F1 is in a turning point for their future now and this past Sunday’s race in Bahrain further made this point.

The future of F1 has two different paths. One path would be want the fans want and another on what the manufacturers want.

The fans want parity. They’re growing sick and tired of seeing the same few teams with the same few drivers win each race.

Mercedes, Ferrari and Red Bull combined to win 146 straight races at one point of this recent era. They won the final 18 races of 2013 and the first 128 races of the hybrid era.

That’s not racing to most. That’s just the bigger teams dominating the rest. It gets redundant to watch. That’s allowed Mercedes to win literally every championship since 2014 with 73 of Lewis Hamilton’s 95 wins coming in this era. So is six of his seven championships too.

The top Red Bull was sixth. The top Mercedes was eighth. The top Ferrari was 12th.

This was parity. This was what fans have been wanting. After seeing 146 straight races won by these three, we’ve now seen two of the last nine won by someone new.

With the new regulations coming out a cost cap and a new car for 2022 as well, could parity be on the horizon? That’s what they’re hoping for, but the bigger teams and the manufacturers themselves don’t want that at all.

See, F1 has manufactures that want to showcase their development and technology. That’s why the bigger teams that have the most to spend outclass everyone else because they’re constantly developing new ways to dominate. With a cost cap and the new regulations for the car mixed with some new teams winning now, it could put F1 back to where the fans want.

Some don’t like this though. Some say F1 is built off pageantry and have always seen this sort of domination. It’s not a great race per say but rather a spectacle to where they come to your country once a year and put on an event to showcase their new toys each season.

It’s a high speed parade of these sorts. There are some fans that applaud this and know this going in. They know Mercedes more than likely will win. They know the final outcome but just want to see these sophisticated cars in person and take it as an event rather than getting too wrapped up on who wins and who loses. After all, that’s what F1 has always been about. If you get some rivalries and up front battles between a couple of teams then that’s just an added bonus.

They point to every other racing series as a spec series and not proper racing.

But, this is where the crossroads lie. Yes, INDYCAR is a spec series and NASCAR has evolved to one. But, those series’ also have some parity too. 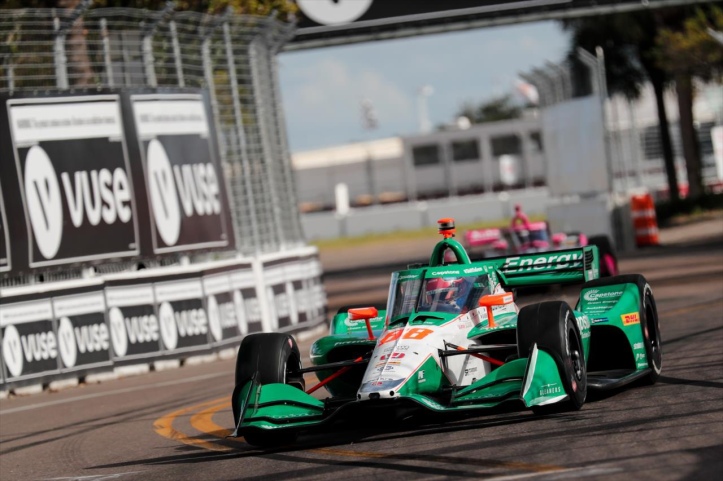 INDYCAR has a right balance. Any team can win on any given basis but they still have their own “Big 3” too. 14 races were run in their 2020 season and Penske, Andretti and Ganassi combined to win 13 of them.

NASCAR has four “big” teams that win most of their races too.

Joe Gibbs Racing, Stewart-Haas Racing, Team Penske and Hendrick Motorsports won 34 of the 36 points paying races in 2020. They took all four of the Championship 4 spots too.

Chip Ganassi Racing has won three times since 2018. Richard Childress Racing has won twice over the last three years too. Spire’s upset win in the 2019 Coke Zero Sugar 400 with Justin Haley is the only other team to have won in the Cup Series since the start of the 2018 season.

Other than Martin Truex Jr’s title with FRR in 2017, you have to go all the way back to Kurt Busch’s championship with Roush Fenway Racing in 2004 as the last team not named Gibbs, Stewart-Haas, Penske, or Hendrick to win a Cup championship.

While INDYCAR and NASCAR have dominating organizations, the door is still open for some new teams to win though. F1 has boring crap racing with literally three organizations winning EVERY race.

Now, they’re finding a balance and one that’s trending to more parity. Just look at how much attention that was on this past weekend’s race for them. There was some excitement with it.

The inner struggle on which direction to go is a difficult one but one that will shape F1’s immediate future. The fans are telling you what they want. Do they listen to them and take that path but also risk losing bigger manufacturers that have made F1 what it is too?

Hamilton’s career is nearing its end. So is Sebastian Vettel. The next wave is waiting. You have drivers that enter career suicide right now by jumping into a car that’s not with Mercedes, Ferrari or Red Bull. I mean, it’s pretty clear Ferrari is eyeing a Charles LeClerc-Carlos Sainz Jr. pairing for many years into the future. Mercedes has George Russell and either Valtteri Bottas or someone younger for their future. Red Bull has Max Verstappen and hoping to find a perfect partner for him soon for their future. That’s the next young crop?

F1 can open this up to more teams being competitive and allow this yearly game of wild musical chairs to see deserving drivers contend. It’s no wonder these cast offs go elsewhere and have more fun in other series’. They’re competitive again.

F1 has a chance here to make this right.