A look back at a wild INDYCAR season finale in St. Pete

INDIANAPOLIS — The 2020 NTT IndyCar Series season saw a perfectly fitting race for the season finale. 2020 has been a wild year and it would be remarkably timing that the 14th and final event would feature rain falling in one area of the 1.8-mile track and not the other. We saw the top four favorites in the race all make rare mistakes, two crashes under yellow flag periods and after 26 caution laps over the final 64 laps of the race, enough to make the pace car run out of gas – literally.

After all of that, the top drivers on the season still finished on top.

Josef Newgarden was anxious entering Sunday’s Firestone Grand Prix of St. Pete. He didn’t like the fact that he didn’t control his own destiny. He trailed Scott Dixon by 32 points heading to the season finale.

Dixon, was also nervous. He felt it worse in Indy earlier this month than he did this past weekend, but he lost 101 points over the final six races to Newgarden, counting Sunday’s race in St. Pete. No wonder he was nervous.

Newgarden’s only shot of winning this year’s title was to go out and win the race. He could only focus on himself and hope for luck to follow. No need to worry about Dixon in the sense that if he didn’t take care of business in his No. 1 Chevrolet, then there would be no championship chances anyways.

That’s why he was so perturbed on Saturday. They had a good car in Q1 of qualifying but not a pole winner. So, they made changes between rounds and they quickly found out that they went the wrong way. They’d not make it out of Q2 and would start eighth.

Dixon meanwhile, was struggling with the brake bias and only qualified 11th. That’s where this championship was essentially won by Dixon though too.

Dixon, just shadowed Newgarden all day. I don’t think there was a time on track to where he was ever ahead of him other than the two times he pit one lap later than Newgarden on the pit cycles. Dixon’s plan was simple – don’t make any mistakes and to just follow Newgarden’s path and the Astor Cup was his. All Dixon had to do was finish 11th or better and a sixth championship was in for the taking.

Where Newgarden went, so did Dixon.

With pole sitter Will Power crashing on Lap 34 and second place starter Alexander Rossi, who led a race-high 61 of 100 laps I might add, crashing on Lap 69, mixed with Colton Herta getting off course twice and James Hinchcliffe spinning under caution, the door was open for Newgarden to win again.

All four of them admitted to driver error on those instances.

Newgarden, passed Alex Palou with 22 laps remaining in Turn 1 and would lead the last 21 laps en route to his fourth victory of the season. The problem was, the opportunities gained by Newgarden by other drivers’ misfortunes was also gained by Dixon too.

Newgarden won on the streets of St. Pete for a second consecutive year while Dixon was third. They finished 1-2 last year too.

It’s also to why Newgarden called Sunday “bittersweet.” He got the win. His pace showed that he may have had a faster car than Dixon all season, but when cautions didn’t work in his favor earlier this season, it cost him a shot at a title. He’s not complaining as he knows the ebbs and flows happen every season like this. Dixon acknowledges this too.

It gave Dixon six career championships but as he says, the only thing greater than six is seven and he will go for his seventh title, which would tie AJ Foyt for first all-time in 2021.

Newgarden, will be back for more in search of his third title in the last five years as well.

They’ll have competition though from Pato O’Ward. The second year driver, who essentially was a rookie, finished runner-up and showed that he’s a star in the making. His peers think so at least and so do I.

O’Ward finished better the two drivers duking it out for a championship and were the top two drivers on this street course the last two years. He was sandwiched between. 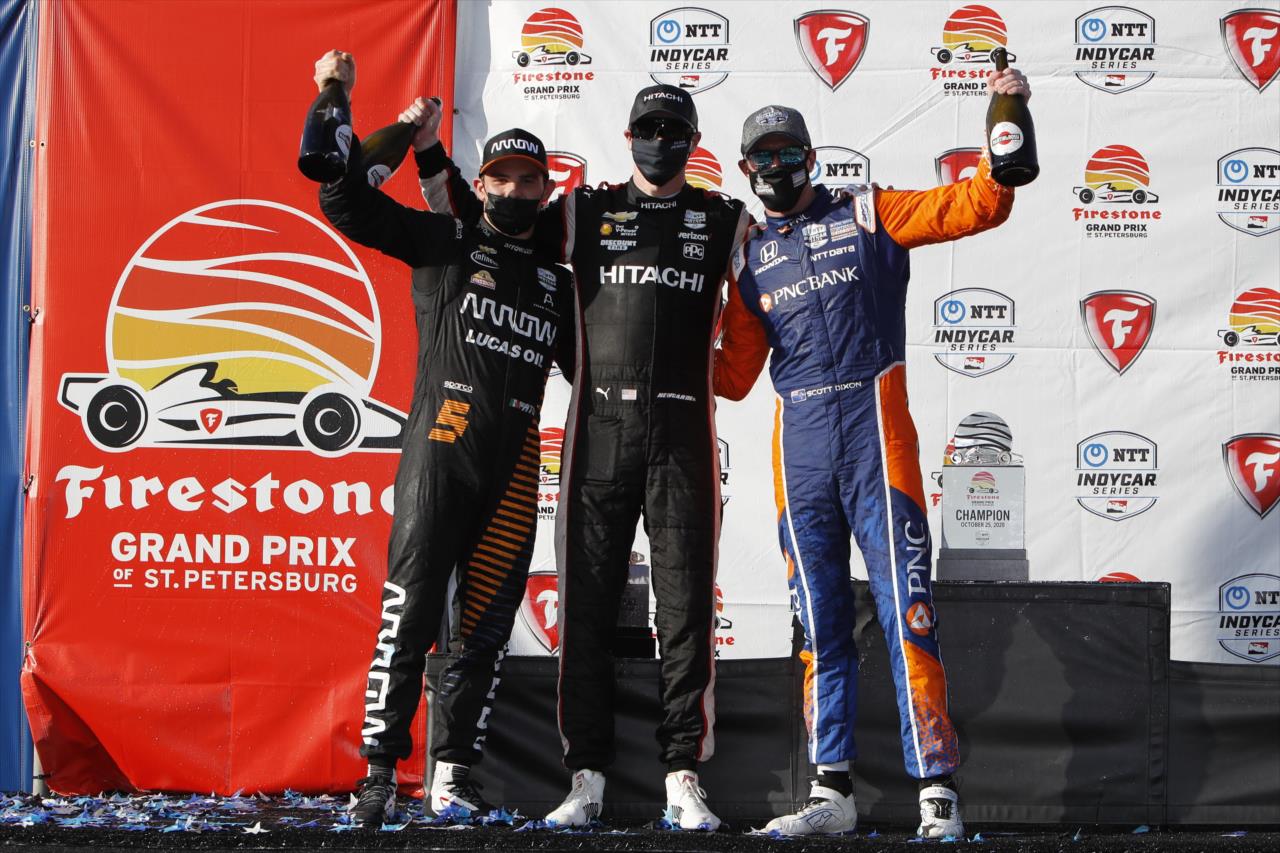 O’Ward was Rookie of the Year for the Indianapolis 500 and had four podiums in 2020, three of which being runner-ups. That put him five points shy of third in the final standings as he came home fourth overall.

The podium drivers on Sunday took three of the top four spots in the championship. That’s why it was a fitting podium for how wild this race was before.

Sebastien Bourdais gave AJ Foyt Racing a shot in the arm in being in the top seven of every speed chart this past weekend and winding up with a top five finish in his No. 14 Chevrolet. It also clinched a spot in the money for the leaders circle payout as Marco Andretti was hit from behind by Takuma Sato and punctured a right rear tire on his No. 98 Honda causing him to crash. That was a $1 million crash for Andretti who had steadily moved his way up through the field and was having as aggressive of a race for him as I’ve seen in a while.

Hinchcliffe did his job of getting the 26 into the money, but he lost a shot at a win when he spun under caution in the final corner under the Andretti caution. He’s never done that before and everyone gives him a free pass on that though because the caution speeds were incredibly slower than normal on Sunday.

These cars are just so hard to drive at slow speeds and everyone after the race was questioning that and said that Hinchcliffe’s spin had everything to do with that.

Plus, the track was slick too, which made the 100 lap race actually very treacherous.

That’s another reason as to why it was fitting to see the top drivers all season finish up front.

Andretti Autosport looked like they were going to sweep the podium for the second time over the final four races, but Rossi’s, Herta’s and Hinchcliffe’s mistakes all ruined that. Throw in Andretti’s crash and not getting the leaders circle money and you get a rough day for AA. But, Ryan Hunter-Reay did charge up from 19th to round out the top five which was a solid ending of the year for him.

Rinus VeeKay earned Rookie of the Year for the season honors, Honda won the manufacturers championship and Scott McLaughlin made his INDYCAR debut but crashed out near midway with VeeKay in Turn 1. McLaughlin, said this was the best day of his life other than his wedding.

Now, we take rest, with the exception of an Indy test this week and a few others in the coming weeks, before a five month offseason. The 2021 season begins where the 2020 one left off in St. Pete.