How the Cup Series playoff picture looks now, Why Harvick should dominate Sunday in Texas, while other playoff drivers may struggle

Joey Logano stamped his name into the Championship 4 for the fourth time in seven years by virtue of his victory in last Sunday’s Hollywood Casino 400 at the Kansas Speedway. Two races remain in the Round of 8 with three spots available still for the final round at the Phoenix Raceway in a few weeks.

We know that at least one spot will go to the Championship 4 on points. Kevin Harvick all but has that spot secured as he currently sits +41 on the cutline heading to the Texas Motor Speedway this weekend.

Harvick, has 12 straight top 10 finishes on the 1.5-mile track including four top two finishes in his last six tries there overall. He’s also won this playoff race for three straight years now. After a runner-up to Logano in Kansas to where he led a race-high 85 laps, the Stewart-Haas Racing driver is feeling really good about his chances a second time around this weekend at Texas.

“I feel better about Texas than I do here (Kansas),” Harvick said. “Our guys did a pretty good job of bringing a whole lot better car than what we had at the first race. If our car’s that much better at Texas than it was the first race, it should be a good weekend.” 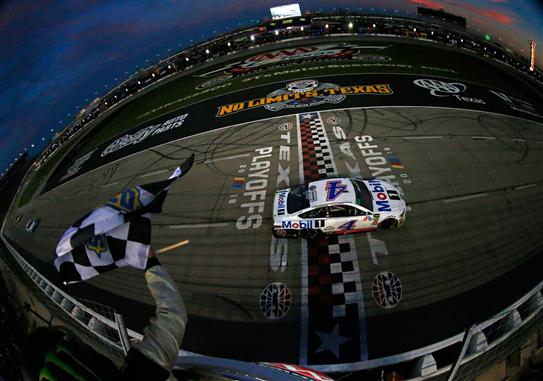 I expect him to compete for the win this weekend and if he doesn’t reach victory lane, he’s got a top five car at the very least. That should be enough to really secure him to Phoenix, even though he’s only had two top five finishes in his last 16 starts at Martinsville, which serves as the cutoff race in the Round of 8.

But, if Harvick does win on Sunday, that means you have two spots among six drivers. We know Kurt Busch is facing a must win this round as after his first engine failure since he joined Chip Ganassi Racing occurred in Kansas. He’s 73 points back.

Busch, has three top 10’s in the playoffs and two top fives in his last four starts overall. He only had one in his previous 21 starts. He’s had a fast race car on 1.5-mile tracks in general including seven straight top 10 finishes overall at Texas too. The problem is though, he’s not had a top five there since 2011 there either. Then, it’s to Martinsville to close up the round to where he’s not had a top five finish on the paperclip since his 2014 win and only four top 10’s in his last 28 overall starts there as well. Busch, has to win and Texas is his best shot of doing so.

The other five can points race, but Martin Truex Jr. is getting dangerously close to having to win. He’s only reached victory lane once all season (22 races ago). He’s never won at Texas before and has only scored two top four finishes in his last seven tries. On the flip side, he has actually won the last two races at Martinsville though, so he is on the opposite end of Busch for chances of winning the next couple of races. It’s just that he’s not had the cars capable of winning recently on the season either.

“I know we can do it, “Truex said. Just a matter of hitting it really right. We’ve not hit it right in a while. We’re good enough to win at least and we’ve been close. We’ve been second, third and fourth a lot of times and today, ninth is unacceptable for us. That’s the way it goes and that’s racing. This stuff is hard. We’ll go back to work. I know we can win at one of the next two. We just have to hit it right.”

Alex Bowman finished third in Kansas but actually lost nine points on the bubble in the process. He’s sits 27 points back and only four clear of Truex. Bowman, has seven top 10 finishes in his last nine starts on the season. He only had four in the previous 23 races prior. But, Texas hasn’t necessarily been a great track to him in the past. He was fifth in last year’s playoff race, but 14th or worse in his other starts including a 30th place effort back in July. At Martinsville, he was sixth in June but has no career top fives on that track either. He, like Busch, is going to have to create some magic this weekend in Texas.

Hamlin only has two top 10’s during this year’s playoffs, but I’m not too concerned about him just yet. He’s had a ton of speed. It’s just that his finishes are off mistakes and not any indication of the speed that he’s actually shown this postseason.

He was running third in the playoff opener at Darlington before getting run in the back of by Jimmie Johnson on his final stop for the Southern 500. He’d finish 13th. A week later in Richmond, he won a stage and had top five pace again but was speeding on pit road. He finished 12th. They didn’t have much in a 21st place result at Bristol.

The Round of 12 was much better. He was third in Vegas and won in Talladega. Hamlin, finished 15th on the ROVAL and now 15th after having a top two or three car again in Kansas.

In Texas, he has to be careful. He won last year’s spring race but has also only been 20th or worse in four of his other five starts recently too. Another bad day and his gap is gone. In fact, if he has a bad day and Harvick doesn’t win, then he could be in some trouble. Luckily for him though, he’s stout at Martinsville to where he’s had three top five finishes in his last four tries on the Virginia short track.

Keselowski, was worried about their 550 horsepower package but we only have one race left in the year on this. He was fourth on one last weekend in Kansas. But, he’s only had two top five finishes now too in his last 12 starts on the season. In Texas, he’s struggled mightily at. He was ninth this past July but that’s one of just three top 10’s in his last 10 starts there. Three of his last five have seen him finish 30th or worse. Like Hamlin, Martinsville is his saving grace. He’s had four straight top five finishes on the short track and nine straight top 10’s, eight of which being in the top five at that. Also, if he and Hamlin struggle on Sunday, it’s not like they lose that much ground then.

That leaves Elliott. He hasn’t had a top five at Texas since his rookie season in 2016. Four of his last five there have seen him finish outside of the top 10. Then, it’s to Martinsville to where Elliott has five top 10’s in his last seven tries, four in the last five in general.

That’s why Harvick should be a shoo in for a top five, if not a win this weekend in Texas. Just look at his competition for the victory. With Hamlin, Keselowski, Elliott, Bowman, Truex and Busch not being factors for top fives on Sunday, that should set up a wild day in Martinsville on Nov. 1.

Hamlin, Keselowski, Truex and Elliott all four are great on that track and if the trends hold true, then it will be among those four for two spots. Two of them won’t make it to the Championship 4.

Plus, JGR and Penske have put four cars in the top five of the finishing order in each of the last three Martinsville races and have won four straight and five of the last six there overall too. Other than Elliott, the other three driver for those two organizations.