“They (Ford) put that focus on that small group of race car drivers versus one of the other OEMs out there that is, in my opinion, ruining other drivers’ careers on a daily basis,” says Stewart, What he means by that here

There are three manufacturers in the NASCAR Cup Series today. Two of them have varying ways to bring drivers up through the ranks. One of which is an aggressive, a hold nothing back, win for me now approach while the other wants to give their drivers time to develop and give them all the tools that it takes to succeed.

Chase Briscoe was signed by Stewart-Haas Racing for their Cup ride in the No. 14 Ford for 2021 and beyond. He’s 25 years old. Toyota, well they do the opposite. They sign drivers young and turn them loose.

“I think Ford has done an awesome job with their driver development program,” Stewart, a three-time Cup Series champion, said on Tuesday morning. “There aren’t a lot of drivers in it, but there’s a reason there’s not a lot of drivers in it because they put that focus on that small group of race car drivers versus one of the other OEMs out there that is, in my opinion, ruining other drivers’ careers on a daily basis by just signing mass numbers of drivers and then at the end of it they don’t have anywhere to go with them or they decide they don’t like them and then those drivers, and most of them are young drivers, lose opportunities that they could have had along the way to go somewhere else.

“That’s what I’m really proud of Ford about is that they’re very selective, they’re very mindful of realizing when these drivers make that commitment to be a part of that driver development program that they work with them and really push to get them where they need to be and make sure that they really are the right drivers before they actually get signed up in the system. So, it’s not throwing darts at a dart board. I feel like Ford has done an awesome job and Chase is a perfect example of that.

What Stewart is referring too is Toyota. Chevrolet doesn’t have an extravagant developmental program and Ford doesn’t either. That’s why he’s saying that you see drivers like Briscoe and Austin Cindric and just a few others move through their program the right way. 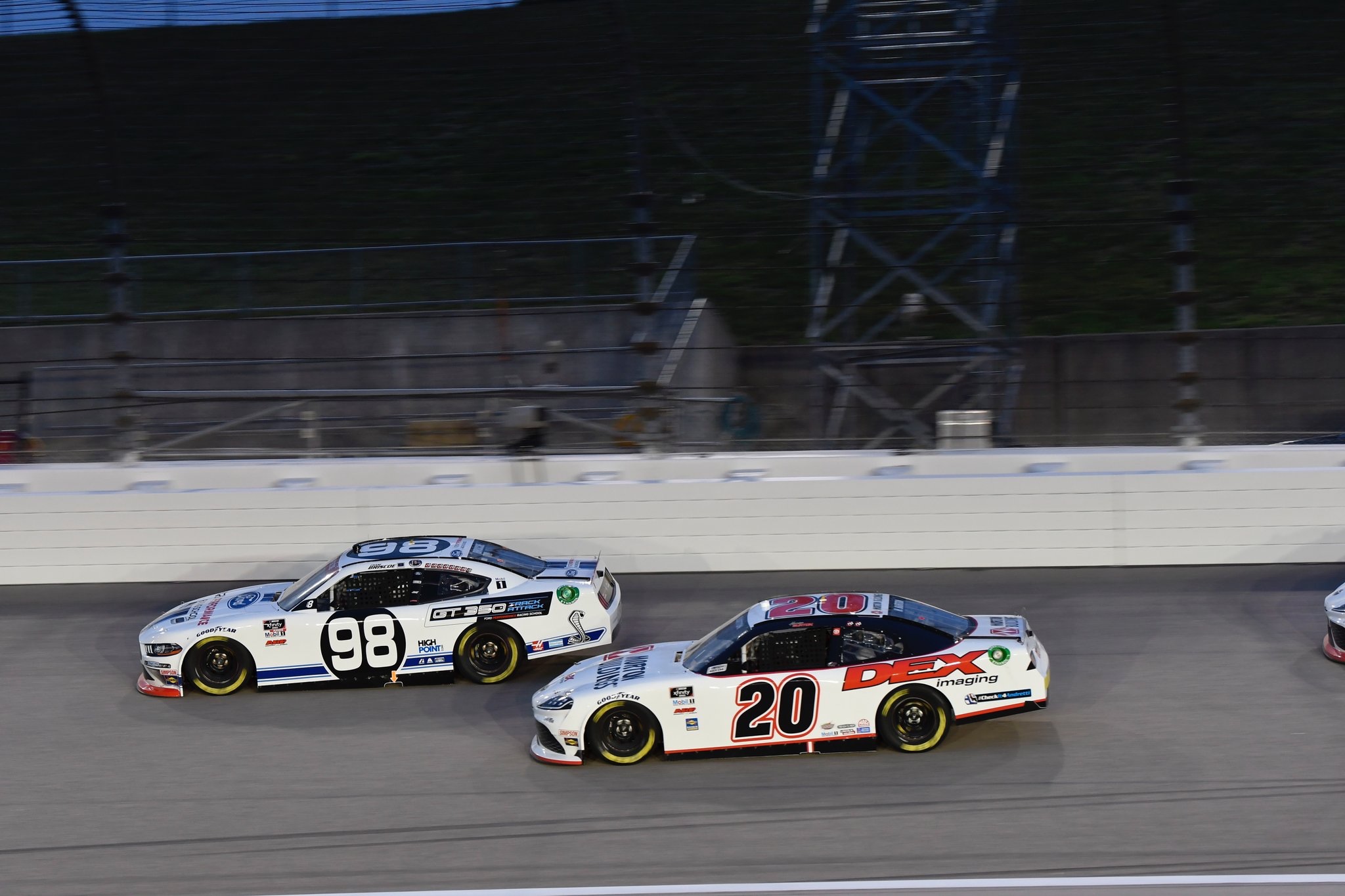 Meanwhile, Toyota signs anyone and everyone it seems. They sign them young and bring them up quickly. The problem with that is, there are only four legitimate Toyota teams in Cup and just 2-3 in the Xfinity Series and 1-2 in Trucks. They’re all with Joe Gibbs Racing (Cup/NXS) or Kyle Busch Motorsports (Trucks). They have more drivers than what they need and there’s not enough room at the top to keep them all.

Just look at how Joey Logano was thrown to the curb by JGR early. He wasn’t winning and they needed his seat. So, in came Matt Kenseth and out went Logano. Since, Logano has gone on to win a championship (2018), has made four Championship 4 appearances now and won 24 times since joining Team Penske in 2013.

Daniel Suarez was next on the chopping block. Rushed through the ladder system like Logano was and never given a fair shake in Cup because he didn’t win fast enough. Suarez, will drive for his fourth team in as many years next season.

Erik Jones is next. He only had three years with JGR and is being cut loose because JGR doesn’t want to lose Christopher Bell. So, they need his seat and Jones is out.

It’s something that Toyota says that puts pressure to win now. Stewart, doesn’t necessarily agree with that business model because it takes time to develop as a Cup driver. You’re not going to figure it out in just a few years. Just look at what Kevin Harvick is doing he says.

“You look in different forms of motorsports there are drivers that are over the age of 40 that still win a lot of races, win a lot of championships as well,” Stewart said. “I feel like, and I can’t remember how many years ago this wave of starting to try to find these 14-, 15-, 16-year-old drivers that was a huge push for everybody, and I feel like they’ve really put an emphasis in an area that they’ve overlooked some really good talent, and I think Kevin (Harvick) is a perfect example of that.

“But I’m also gonna go back to years ago. I’ve said it then and all the way to the present and I’ll still continue to say it — Kevin Harvick is the complete package. He’s a great race car driver. He was a great owner. He’s great at building teams. He’s great at managing teams. He understands how partnerships and sponsorships work in this sport and he also has a great management company, so Kevin Harvick single-handedly is the most well-rounded driver in NASCAR right now — has been for years and that’s why someone like him is able to do what he’s done this year.

“He has the ability every week to go out and if we can give him a car that’s close and in the ballpark, he can do the rest of the work and get it the rest of the way.  On days that the car is perfect and he’s perfect, you’ve seen what happens. It’s proof that you don’t have to be a 14-, 15-, or 16-year-old driver to be great and all this emphasis on finding the next young guy, there are other guys in the sport.

“Look at Martin Truex Jr. Martin has been around this sport for a long time. One variable changed in the equation and all of a sudden Martin is a championship-caliber driver.” 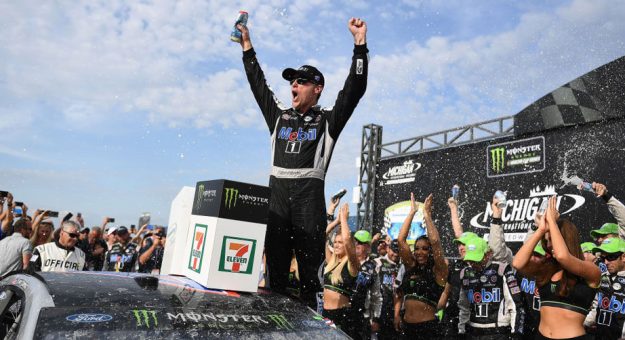 Stewart says that the Toyota camp is signing these drivers as young teenagers and it’s too soon to know if they’ll ever pan out.

“I laugh and I make fun of all the organizations that are looking for these super young kids that are kids,” Stewart continued. “Some of them don’t even have their driver’s licenses and their parents are having to drive them to the race shop and I’m like, ‘You have to let these kids grow up.’  They aren’t mature yet. They’re great race car drivers, but at the same time I’ve also told people to tell my how good their 14- or 15- or 16-year-old kid is I said, ‘Well, has he crashed hard yet?  Or her?’ And when they say no, I said, ‘Well, don’t tell me how good he is until he comes back from a hard crash and then let’s see how good he is because then you’re gonna find out what you’ve got.’

“So a lot of these young guys, the cars are so safe that they feel like they’re invincible in them and they all run fast, but they don’t have the savvy and the background of someone like a Kevin Harvick has and a Martin Truex has to sit there and go out and understand why they’re doing everything the way they’re doing and that’s why you see a guy like Kevin Harvick have the success that he has.”

He’s not wrong either. Toyota has dozens of drivers coming up. They’re grooming them to almost fail. NASCAR is a tough sport. It’s not easy to win in.

Even Toyota has acknowledged the need for more teams. They’re not wanting to groom talent for other manufacturers either as they’ve lost Kyle Larson, William Byron, Noah Gragson and others due to them being plucked away from Chevrolet.

Ford’s path is simple. Just sign a couple of drivers to groom to come through the ranks. Give them all the time, money and resources to contend and hone their skills. Then, move them up to good rides when they’re ready and allow them time to grow and succeed. In the meantime, as rides open up on the Cup level, they’ll sign cast off’s from Toyota or seasoned veterans to fill the void.

Just look at the NXS level. There’s only two Ford teams. They have only a few drivers in Trucks to come up.

Chevrolet has a similar plan.

Toyota, has all the other drivers and no way to keep them all.