The Go Bowling 250 marked the first of two NASCAR Xfinity Series races at Richmond. It was a 250-lapper around the .75-mile track in Virginia.

Driving the No. 54 Toyota for his normal Joe Gibbs Racing team, Busch fired off from the 29th starting position, made it up to eighth by the end of the first stage and then fourth at the conclusion of the second stage, ultimately finishing third. He surprisingly didn’t lead a single lap.

Myatt Snider had an early issue eliminate him from contention. On Lap 46, Snider‘s No. 93 RSS Racing Chevrolet got caught up in commotion between Kaulig Racing teammates Chastain and Haley, resulting in hitting the wall hard enough to end his day early. Snider was listed 36th on the results sheet.

Snider entered the race 14th in the standings — two spots outside the playoff picture. He remained 14th afterward.

The NASCAR Xfinity Series returns to action in less than 24 hours at the same track for the second part of its doubleheader — the Virginia is for Racing Lovers 250 (2 p.m. ET on NBCSN/NBC Sports App, MRN and SiriusXM NASCAR Radio). After this weekend, only the regular-season finale remains before the 2020 playoffs begin.

Note: Annett locked himself into the playoffs on points with his seventh-place results on Friday night.

Justin Haley has heard you. He’s seen the comments about how he can’t show up big away from a superspeedway race track. He’s won twice in the Xfinity Series and once in Cup during his young career. All came at either Daytona or Talladega.

Well, he hopes he silenced everyone on Friday.

Haley, led 51 laps but just didn’t have enough in the end to keep Justin Allgaier behind him. Haley said his crew told him to cool it on the lap times and he said he was. His car was just that good. The fall off was strong still as Allgaier rose and got by Haley.

Still, it was a strong runner up on a tough track. It’s also much needed too as Haley only had one top five over the last seven races entering tonight.

Kyle Busch was making his fifth and final start in the series on Friday night. He’s won 97 times of his career in Xfinity competition and says that if you want to see him go away, he needs to get to win number 100. He will have to win three of his five starts next year to keep him out on 2022.

See, Busch was surprisingly non existent in Friday nights race. He started in the back and found his way to the front early, but he said the tires just threw them for a loop again and never could factor in for the win. He was eighth and fourth respectively in the two stages and finished third in his No. 54 Toyota.

It was his fourth top three in those five starts this season but he only had one win overall. It was his ninth consecutive top four at Richmond and 12th in his last 13 tries but what was remarkable was that he failed to lead a lap.

Cindric good on a short run

Austin Cindric kept the momentum going. He scored his 11th top 10 in the last 12 races including nine top fours in his last 11 overall with a fourth place effort in his No. 22 Ford on Friday night. He was runner up in both races at Richmond last year and led 64 laps tonight.

Cindric, said that they set his car up for short run speed which without a caution from Lap 20 on other than stage breaks and the competition caution, this race featured long green flag runs which hurt his race winning chances.

Ross Chastain led 39 laps and finished fifth on Saturday. It was his fifth straight top six finish and 16th top 10 over his last 17 tries.

Riley Herbst finished 10th on Friday night for his sixth straight top 10 and seventh in the last eight races. He’s +165 with two races left in the regular season.

Tomorrow’s race will be different

Tonight’s race was run under the lights. Saturday’s will be in the heat of the day which means much more slipping and sliding. In turn, that also means the setups tonight won’t work tomorrow meaning a lot of changes to be done.

Also, there’s a top 15 invert so that should create some wild racing early.

The top two drivers in stage wins won them on Friday night. Austin Cindric warmed his 10th stage win by virtue of his win in Stage 1 while Allgaier’s Stage 2 win was his ninth of 2020. 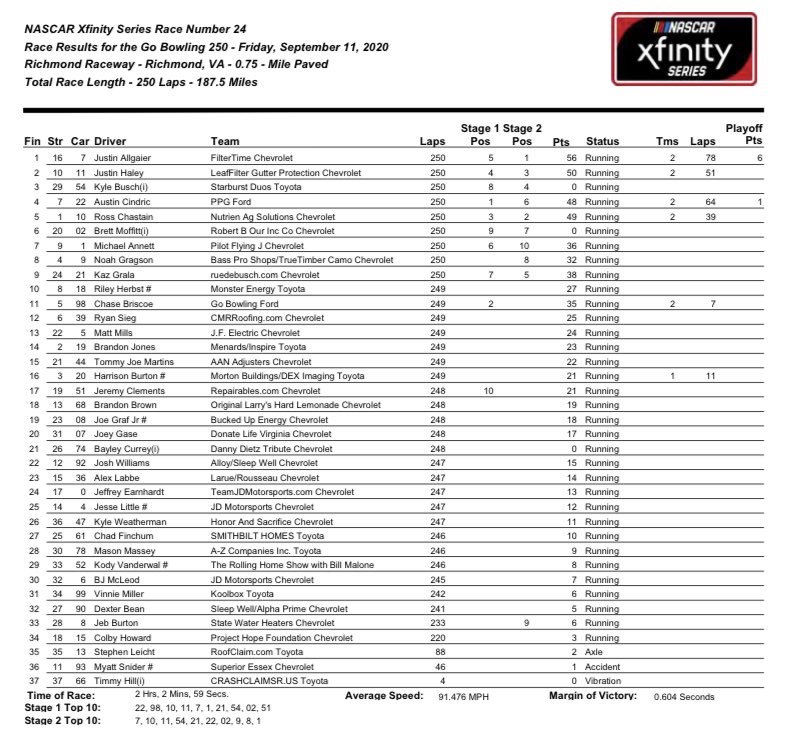