MADISON, Ill — Pato O’Ward is going to win an NTT IndyCar Series race sooner rather than later. Unfortunately, despite his best efforts in leading 94 of 200 laps in Saturday’s Bommarito Automotive Group 500 at the World Wide Technology Raceway and 36 of 200 more on Sunday, he failed to reach victory lane in either race.

That’s 130 of 400 combined laps led by his No. 5 Chevrolet this weekend in Gateway. For a second year driver to be that close in a span of two days but not win in either, it would weigh a lot on you right? Especially on how close he was to winning both.

O’Ward inherited the lead after the first pit sequence on Saturday. He’d lead the next 94 laps before losing the top spot to Scott Dixon in a race off pit road for the final time. O’Ward’s Arrow McLaren SP pit crew was flawless. It was just Dixon’s was that much better.

Then, a few laps later, Takuma Sato came charging out of no where to pass O’Ward on the outside in Turn 1. O’Ward would fade to finish third as a result.

Instead of being dejected, he kept his chin up.

“My in and out laps were very strong, but (Scott) Dixon got us by a little bit,” O’Ward said. “He’s a tough guy to beat. We had a very strong run, but I had nothing for Takuma (Sato) and Scott. I had to maintain where I was and salvage the podium from there.

“We’re in the fight. We’re in the fight, at least for second (laughter). I think it’s been a long time coming. The guys have been working very hard. I truly feel like they deserve the strong results we’ve had these past couple weekends. We’ve left a lot of points on the table, as well. But I think as a team we’re just getting better and better.

“We are running in a very cool position to be in in my first year in INDYCAR with such a competitive field, such talented drivers honestly. I’m very happy.”

A day later, the same thing happened — again. O’Ward inherited the lead after the first pit sequence. He lost it after the second, but was in a fight on the final pit sequence for the win. Josef Newgarden beat him in a drag race off pit road as O’Ward finished runner-up this time.

That would be enough to rattle him again, right? Nope.

He’s drawing rave reviews for how he’s handling this from his competitors. The respect level is high among them. That’s what matters the most to a driver is how your peers view you.

“I think that’s the name of racing, isn’t it” Sato said of the pass of O’Ward on Saturday. “Nothing risky at all. Pato, he’s such a great driver, such a talented driver. He always give us space. Very committed driver.

“We were just able to have a better go because obviously Dixie will be run away. Had to make most of it while the tire still fresh. Once again, I feel fresher tire definitely helped.

“After the race, he came to me, hugged me. He really enjoyed it. I know he went sideways. I gave him room for that. If I put too much room, I put myself in the gray, never come back.

“It was tight. But that’s podium fighting in racing, shall we say. I certainly, yeah, enjoyed it. Hopefully the fans enjoyed it is really most important.” 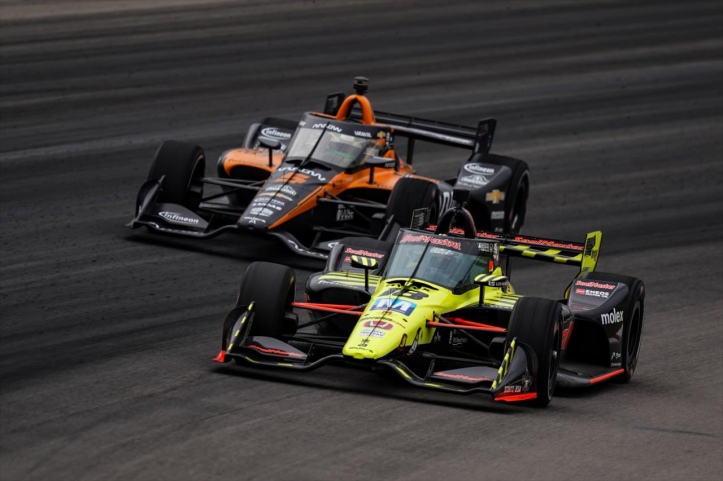 O’Ward was mature and wasn’t mad at that move at all.

“Honestly I thought we touched,” he said. “I didn’t think he was going to throw it outside, but he did. He didn’t do anything wrong. I mean, I think that was racing. I’m sure fans would have loved it.

“Yeah, just right when he was on the outside, I had to step on the brakes and back out. If I didn’t do that, we were both going to be in the wall.”

On Sunday, he got more rave reviews.

Just listen to what Newgarden had to say about O’Ward following their close racing off pit road. It sounds a lot like what Sato said.

“We just got ahead of him,” Newgarden said. “I was curious. I moved on him just a little bit to try and show him that we were ahead. I thought maybe he would lift out. Made sure I hit the button just right on the cone so he didn’t get a good jump. I was just kind of surprised to see him holding on the outside. He did a great job.

“We gave each other room. We went two-wide. We raced all the way to turn three. I think the first thing I would say is he’s doing an amazing job himself. Pato has been a real talent. I always believed he was a strong driver, was going to do well in INDYCAR or anywhere he sort of ended up. It’s nice to see him find his success and doing a great job.

“He drove me well, drove clean. Certainly deserved to be up there and had a shot at winning the race, as he should. Pretty fun to be in that fight at the end.”

Here’s O’Ward’s side of that battle.

“I could probably get within like a car length or two,” he said. “But more than that it was really tough to follow because the train of cars in front of Josef was massive. If maybe there were no more cars in front, maybe it would have been a bit easier to close up on him and try to get a run. It would have been extremely difficult. My only chance was on the pit exit. I had so much understeer.

“I have so much respect for Josef. He is one of the fairest if not the fairest and cleanest drivers in the paddock. So competitive but yet he’s not dirty. I know that I can really race him hard without putting both of our races in jeopardy. Honestly, tried on the pit exit when I was on his outside but couldn’t quite get it done.”

“It’s very strong, very strong,” he said of him. “Always knew he was really fast. We saw that in Indy Lights, the few races he did in INDYCAR last year. So, yeah, he’s right where we all expected him. He’s definitely going to be a force to be reckoned with in the future.”

Speaking of the future. Tony Kanaan was making his final start of his career but said that O’Ward will have a long career ahead of him too.

“I mean, he’s been driving a heck of a season,” Kanaan said. “I think INDYCAR, I would say since Josef came in from Indy Lights that impressed the hell out of me, this is the best year as far as having new talents. We have really, like, four really good rookies. It reminds me back in the day when me, myself, Helio, joined INDYCAR. We’re talking about a long time ago.

This is just the beginning for O’Ward. You see what he’s doing. You hear what his peers are saying. Then you see what O’Ward is saying and how he’s handling these defeats in the process. He’s still learning, that’s the scary thing. The skies the limit for this kid.

“I truly feel like those were kind of the last little push we needed to really be there every single weekend,” said O’Ward. “You have to do it first in order for yourself and your team to, like, 100% believe you can actually achieve it.

“There’s so many little things that go into an INDYCAR race to finish like in the top five. You’re in and out laps have to be very strong. Your pit stops have to be very strong. Consistency, tire management, a lot of factors that go into it. Whenever you are learning to master that, you’re getting results within the top five, top three, it’s like, Okay, we can do this.

“We just have to keep chipping away. I’m sure a win will fall soon. I sure hope it does. But, yeah, it’s been a good ride so far. I’m still learning a lot when I’m driving behind these guys that have been in the series for so long. You can definitely learn something from them.

“I’m trying to gather up as much as I can this year.”

He’s a championship contender while doing so. Imagine what he can do with a few more years under his belt.