Empty Indy 500, but this race will go down in ‘500 lore too, “It’s different because I bet you that they’ll become one of the best known names because of it”

INDIANAPOLIS — Carb Day practice is over. The final two hour practice session for the 33 NTT IndyCar Series drivers concludes all the pre race festivities on the 2.5-mile Indianapolis Motor Speedway this month. Now, we’re all set for the 104th Running of the Indianapolis 500 (1 p.m. ET, NBC, INDYCAR Radio Network) on Sunday.

The Thunderbirds will flyover. Back Home Again in Indiana will be sung. The National Anthem too. The command will be given. The engines will fire.

But, this year’s race will look nothing like before. The 104th edition is going to lack the pizzazz before as well as after it, that the previous 103 years of this “Greatest Spectacle In Racing” has never seen — and this place has seen a lot.

This place is like a living, breathing human. While it may look different than us humans, it still has a heart with a pulse and a brain that thinks any way that it wants. You don’t dare test the famed speedway just as you don’t dare test our Lord and Savior.

Sunday, we’re going to have to let this place put the energy in us. See, every Memorial Day weekend, some days on Memorial Day, others on the Sunday before, thousands upon thousands of fans flock to the gates at 16th and Georgetown to witness history. The same excitement that this place feels to reward racing immortality, is the same that the fans feel witnessing it.

This year, no one will be allowed through those gates to see the fight to become the next legend of this sport. They won’t be there to cheer these 33 daredevils on as they stroll through Gasoline Alley to their cars on race morning. To have upwards of 300k spectators cheering you on, it’s a chills moment for these drivers.

They feel what you feel on race day. That’s why the battle for them during pre race is to harness those emotions. This year, that walk through Gasoline Alley is going to be a lonely one. No cheers. No words of encouragement. Instead of building yourself down a bit, you may have to build yourself up.

“It’s going to be different, even with the race start being later is kind of a weird wrinkle in what’s going on compared to usual,” JR Hildebrand said. “We’re used to being up pretty early for interviews and all the stuff, that alone can make it pretty difficult to sleep the night before. That’s gone away by orders of magnitude this year by with what’s going on.

“I’ll put it this way, the last five or six years, or say as a rookie, all the pre race stuff, I felt like I was already in a mode to kind of drown everything out and just get focused on getting in the car, even to the point of being kind of antsy to just hop in, strap in and kind of put the visor down. At that point you’re really focused at the task at hand.

“But, in the last bunch of years, I guess I’ve grown to appreciate how incredible the pre race experience is and how lucky we are to be standing on the front straightaway for the Indianapolis Motor Speedway that day to be one of those few people that no only have the chance to be competing in the race but to just be there to take it all in. The way that we honor the military on Memorial Day weekend, to be there to feel the energy of the crowd, the fly overs and all of that stuff is, there’s not another place in time throughout the year that you can have those levels of magnitude and so this year I think it’s almost going to be like trying to free yourself of the distraction that it’s not happening to some degree. Still trying to use a little bit of that pre race energy to get going through that experience.”

His teammate Sage Karam agrees. He’s missing the fans as much as the fans miss being here for him.

“It’s definitely weird not having everybody here,” said Karam, who will be making his seventh Indy 500 start on Sunday. “Practice, I don’t think things have been as weird yet. We’re used to the grandstands kind of being empty. You get those fans that come back every single year and they come visit the garage and you just kind of build a relationship with them and a friendship. So, you know those certain fans and to not see them is kind of hard.

“You feed off the energy. I’m sure for any person that’s won this race. They come out of the car and to feel the fans erupting with joy. That really brings the energy. To not have that, it will be a little weird.”

AJ Foyt Racing’s Charlie Kimball says Sunday will be a surreal feeling for him.

“Looking at this facility that usually comes alive when the calendar turns to May 1, lets be honest,” Kimball said who’s set for his 10th career ‘500 start this weekend. “You start to feel the pulse of this place on May 1 and it only builds through Memorial Day. This year, walking out of Gasoline Alley, onto pit lane, seeing those empty grandstands, it’s going to be surreal.

“As a driver, to get in that right mindset, to get in that process working, I’m going to have to make sure I’m paying attention to the details and getting all the little things right to be ready to do 500 miles with 32 of the best drivers in the world and trying to beat 32 of them.”

Fan favorite Tony Kanaan says he’s going to have to build himself up too. He notes that it’s going to be weird driving in here since it won’t take any time at all dealing with traffic.

“100 percent,” Kanaan said. “It’s going to be so weird walking and seeing nobody there. You can feel the energy right. Every time. You’re talking about 300,000+ people in this place The energy is there. It’s a lot more quiet now. It’s eerie.

The popular Brazilian driver says that it’s going to be weird on the first lap without seeing the wall of fans around this massive facility that span over 900 acres, but as he says, “there’s still a 500 to win.” 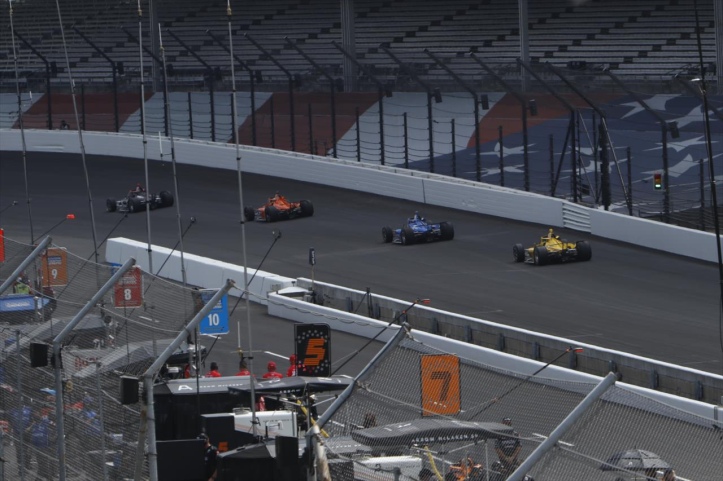 He’s right. While a lot say an * should be next to this year’s Indy 500 champion, the drivers note, that this year’s race may hold more importance for a historical outcome than arguably a race like the 100th Running in 2016.

“I’ve gone to the museum a lot of times and talked to historians and stuff like that and they always talk about who won the Indy 500 on the 100th Running and they also talk about how the race wasn’t held in certain years for World War and I honestly believe that this race will always be talked about in IMS history where they say we had one year where we raced with no fans and the winner of that race was so on,” Karam said of this year’s race. “So, as much as this one is kind of weird in winning without the fans, I almost think this is one you want to win because this is the one that’s going to be talked about and the winner of this one will always get brought up that this was the Indy 500 run without fans. This one is going to be pretty special.”

Kimball agreed with that assessment too.

“I think there are going to be a lot of footnotes in the history books about 2020,” Kimball continued. “Not just here at the Indianapolis Motor Speedway and the Indianapolis 500 but around the world. It’s always special winning the Indy 500. It’s going to be a different experience, but you drink milk in victory lane. You face goes in record books. You’re immortalized forever. It doesn’t matter that it was Aug. 23 instead of May. There’s race results where they race lasted less than 500 miles but they’re still champions. It makes for fun trivia but that’s all it is.”

For Graham Rahal, he says that the feelings he has in the nerves department doesn’t change Sunday on how it would have felt in May each year with people here or not. It’s going to be important to win this year’s race too.

“I’m still going to be nervous as hell,” said Rahal. “It’s not lost on me on how this race feels. The fact that I want to be standing right there drinking a glass of milk at the end of this. That doesn’t change.

“What changes is crossing the finish line first without all those people there cheering. That’s going to be different. What isn’t different this year? What isn’t different? I’d much rather be here and racing than have no opportunity to race in the Indy 500 this year. It’s different because I bet you that they’ll become one of the best known names because of it.

“So, to me, I don’t think it matters. We want to go win this thing. The whole vibe is different. It’s unique in that perspective.”

Sunday will definitely be unique that for sure.