All 3 Penske Drivers Have Won This Season, Can Get Pick Up Another Victory This Weekend In Pocono?

And just like that, Team Penske wins their fifth race of the season to retake the series lead in victories for 2020 following Ryan Blaney’s valiant effort to hold off several hard charging competitors to win in another photo finish at Talladega Superspeedway. It was Blaney’s fourth career victory and second consecutive at Talladega. He is now the eighth different driver to win consecutive races at Talladega in the NASCAR Cup Series joining Pete Hamilton (1970 sweep), Buddy Baker (1975 sweep, 1976), Darrell Waltrip (1982 sweep), Dale Earnhardt (1990, 1993-94, 1999 sweep), Sterling Marlin (1995-96), Dale Earnhardt Jr. (2001-2003) and Jeff Gordon  (2007 sweep).

With all three of Team Penske’s drivers having wins this season, they now have guaranteed spots in the Playoffs – Joey Logano (two wins: Las Vegas, Phoenix), Brad Keselowski (two wins: Bristol, Charlotte) and Ryan Blaney (Talladega) –  making this doubleheader weekend at Pocono a great opportunity to pad their stats as all three have previously won at the 2.5-mile raceway. 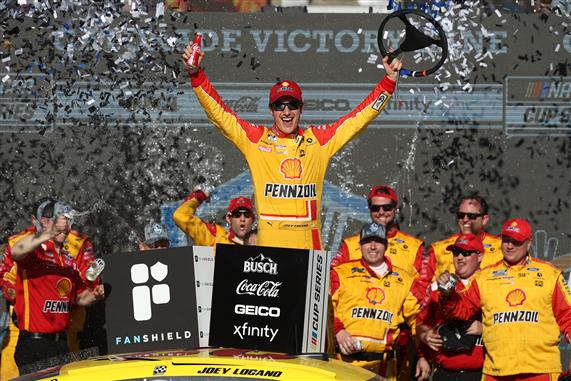 Heading into this weekend, Joey Logano is second in the driver standings, 23 points behind Kevin Harvick in the standings lead. Logano has made 22 series starts at Pocono posting one win (2012), four top fives and eight top 10s. In the two Pocono races last season he finished seventh in June and 13th in July.

With his win last week Ryan Blaney hopped two spots in the driver standings to third; just two points behind his teammate Logano in second and 25 back from the series standings lead. Blaney has made eight series starts at Pocono putting up four top 10s and grabbing his first series career win back in 2017.  In the two Pocono races last season he finished 12th in June and 10th in July.

Brad Keselowski is fifth in the driver standings following Talladega, 49 points behind Kevin Harvick in the standings lead. Keselowski has made 20 starts at Pocono posting one win (2011), 10 top fives and 12 top 10s. In the two Pocono races last season he finished runner-up in June and eighth in July.

They’re doing all of this with a crew chief swap in the offseason that proves to be paying off.

Bold. That’s the best word used to describe Penske’s shocking decision to swap all three of their NASCAR Cup Series teams with one another back in January. They finished 5-7-8 in the final standings last year and here they are making drastic changes.

Basically, the only thing that would remain would be Joey Logano in the No. 22 Ford, Brad Keselowski in the No. 2 Ford and Ryan Blaney piloting the No. 12 Ford. The crew chiefs would move to different pit boxes for all three and take their pit crews with them.

As we soon near the midway mark of the season, I and everyone else, should have known better than to question any move signed off on by Roger Penske. Period.

The move appears to be working flawlessly. In a sport where crew chief and driver combos are normally the reason for winning championships or not, to do so that late in the offseason was shocking.

Logano, isn’t shocked that the speed didn’t leave despite some new faces to work with within the same building.

“No, not necessarily,” Logano said. “I think if you look at what was going on last year we all had good speed, all of our cars were strong at different points of the season or different types of race tracks, so I really didn’t see much of a risk by doing it and I think I’ve seen just a longer runway for everybody because you’re really sharing information.

“Obviously, we share setups and we talk to each other, but I never drove Brad’s car.  I never worked with Paul.  Blaney never worked with Todd and Jeremy with Brad.  We can talk about it and we can try to mimic setups, but it’s not the same, so this has been enlightening.  At the same time, I’m bringing what we did last year to Paul and Paul is bringing what he did last year and we’re able to just kind of try to make the best of both worlds.

“It’s been fun.  There have been a lot of interesting conversations that get sparked that otherwise wouldn’t have happened.  As weird as it is to see what was your team for six or seven years working with Blaney, but I honestly can tell you that the relationships that you build with your team it becomes family, so I hope for their success and I’m glad to see Blaney is running really well and leading a lot of laps and a win is right around the corner.”

Blaney, has benefited the most. He’s arguably the fastest car with Penske right now. That was shown in Martinsville a few weeks ago, as he twice came from the back to the front on a .526-mile short track that nobody says you can pass on and finished runner-up.

Blaney, finished runner-up in the Daytona 500 and easily should have finished in the top two in each of the next two weeks in Vegas and Fontana. A late race caution in Vegas and tire problem in the closing laps at Fontana took second place finishes and turned them to 11th and 19th place results respectively. In Phoenix, he was collected in an early race crash.

Still, Blaney’s speed has remained after as he’s a top four machine, with four in-a-row to be exact and six in the last seven races.

That leaves Keselowski who won the Coca-Cola 600 as well as the race at Bristol to start this month off with. He’s been the most consistent with seven top 10 finishes over his last eight starts.

Now, can they sustain this pace? A NASCAR season is long and while you may start fast, you have to keep adjusting your race cars because others are coming. Joe Gibbs Racing is starting to find pace while Hendrick Motorsports is vastly improved. Throw in Kevin Harvick and you get enough people jockeying for Penske’s positions up front.

But, that’s why these moves were made. It wasn’t just to find the speed, it was to adjust and adapt to keep it too.