You know what they say, in order to get some good luck on your side, you first have to put yourself in position for it. Heading into the final two laps of Sunday’s Food City 500 at the Bristol (Tenn) Motor Speedway, the second and third place drivers had long winless streaks going. They were going to do anything they could to end those droughts. Instead, a driver who won just last Sunday would win for the second time in seven days.

Sports can be cruel to some yet rewarding for others.

Brad Keselowski benefitted from a two-tire stop on his final trip down pit road and would take over the lead on Lap 498 when his teammate Joey Logano and Chase Elliott would crash each other out while battling for the lead in the final laps. In turn, that kept Clint Bowyer who was riding a 65 race winless streak and Jimmie Johnson (103 races) out of victory lane because he held the spot that they were all going for.

“My plan was to move him when I got to him,” Bowyer said. “I probably would have done that. I wasn’t going to have any trouble apologizing to Brad for dumping him at the end.  But I couldn’t catch him.  That’s my story and I’m sticking to it.”

That’s the old Bristol at its finest. Two drivers crashing while fighting for the win in the closing laps which followed the previous leader (Denny Hamlin) crashing out while leading with 11 laps-to-go himself. A driver saying if he could have caught the leader on the final lap, he was going to dump him. Hurt feelings, high tempers. That’s Bristol.

“Just going for the win,” Elliott said of his incident with Logano. “Trying to get underneath and got really loose in. I don’t know if I had a flat tire going down or I just got loose on entry. As soon as I turned off the wall, I had zero chance of making it. I’ll certainly take the blame. I felt like that was my shot. He was really good on the short run and I felt like I had to keep him behind me right there in order to win the race. I hate we both wrecked. You can’t go back in time now.”

For Logano, he was mad about it, but more mad for what transpired on pit road in their conversation about the crash.

“It frustrating,” Logano said of his take. “He wrecked me. He got loose underneath me. A simple apology as a man would for him to come up to me and say ‘hey my bad.’ But, I had to force an apology. To me, that’s childish. We had a good recovery and had a shot to win and that’s all you can hope for. I passed him clean. It’s hard racing at the end I get that, but golly man, take the hit and be done with it.” 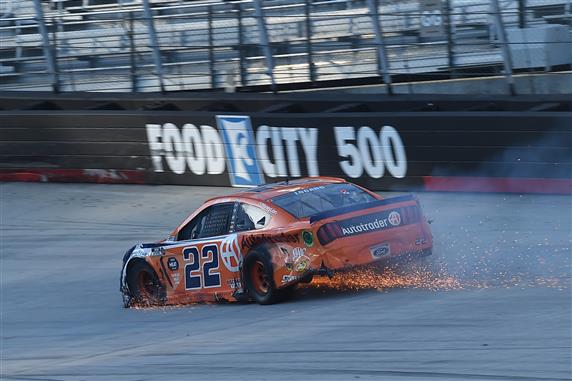 Keselowski, was gifted an early Christmas present wrapped in the shape of the Gladiator’s sword that is the treasured trophy given for a Bristol win.

“Just wild, wild day,” said Keselowski who earned his 32nd career Cup Series win. “One of those days that you look at and you think of going back, being a part of Bristol lore for a long time to come.  Glad we were able to win it.”

This racing package was made for NASCAR. Lower downforce is the way to go. With the way the .526-mile oval was prepared, it made Bristol race like the old Bristol.

“Oh, without a doubt,” Keselowski said on if he could tell a difference between last year’s racing package at Bristol and this years. “The cars are significantly harder to drive, significantly slower.  They’re significantly more racy.  I think we saw a better race accordingly.

“So much beating and banging. We have all been cooped up in our houses too long, came to Bristol and took out some aggression I guess.  I don’t know.

“Early on in the race everybody was hitting each other.  It carried in all the way to the end.  Some people ran me over.  I probably ran some people over.  Everybody is mad at everybody going into Atlanta next week.”

That’s good for NASCAR and just think, Bristol’s return race in 2020 is a playoff race.