Grosjean to officially take over the No. 28 Honda for Andretti Autosport, why now and more nuggets from Friday’s press conference

LONG BEACH, Calif — Andretti Autosport will remain a four car outfit for the 2022 NTT IndyCar Series season. Colton Herta and Gainbridge is back on the No. 26 Honda. Alexander Rossi and NAPA Auto Parts are back on the No. 27 Honda. DHL will return as the sponsor of the No. 28 Honda. But, for the first time in over a decade, the pilot of that red/yellow colored Dallara won’t be Ryan Hunter-Reay.

During the offseason, Hunter-Reay signed a one-year extension to return to that seat for the 11th straight year. So, with DHL coming back, why isn’t Hunter-Reay?

He knew it and the team knew it. They each felt like it was time to move onto other endeavors and Hunter-Reay said during the post practice press conference on Friday that he knew in November of last year that 2021 would be it.

“That was always our understanding,” Hunter-Reay said of signing a contract last Fall and knowing that would be the last he’d sign with an Andretti Autosport logo on the top of it. “I mean, it’s even written in my contract. You never know. I mean, we were third in that last stop at Indy when Alex and Helio were running in front of us. Who knows, we have a shot at fighting that out, we end up winning the Indy 500 or something like that, that tends to change your season. Look what happened to Helio, right? He goes out for a one-off, now going into a full program.

“If you hit a stride, never say never, things can be reworked and things like that. No, I think we’ve seen out our time there. I’ve just gone in every weekend kind of trying to have a straightforward weekend. Last weekend we had a fueling issue. It’s one thing or another. We would have finished in the top four or five.

“It’s been a lot of those this year, so I’m definitely ready to move on.”

Hunter-Reay spoke back in August too and said that he felt like it was time for a change.

“Sometimes you need to shake it up,” Hunter-Reay said the week of the race at Nashville. “Sometimes there needs to be change, and I agree with that. Michael said that, as well. The team has to find a stride, and we’ll see what that entails.

Hunter-Reay joined Andretti for the 2010 season after spending his first couple of years in the sport with Rahal/Letterman/Lanigan Racing, AJ Foyt Enterprises and Vision Racing.

The first year with Andretti was a breakout year for him. He was runner-up in his first start in Brazil and won his fourth start on the streets of Long Beach. Two years later, he was a champion. Two years after that, he won the Indy 500.

With just one podium in his last 33 starts and being winless in his last 46 tries, Andretti felt like it was best to move on. Hunter-Reay agreed. 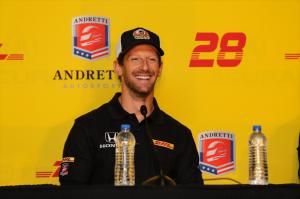 “No, absolutely not,” Hunter-Reay said on if he had any regrets. “I raced for like 12 different teams, something crazy. Driven for all of them, Andretti, Rahal, Foyt, you name it I’ve been there. It’s been tough. That’s what’s really made me, is having to claw my way through. Hey, here is a two-race opportunity, go make do with it what you may. I had to be fast, keep care of the car, bring the results home.

“It made me the driver I was throughout the championship fights, throughout all those wins and stuff like that. Absolutely, I wouldn’t want to do it another way.

“Obviously we had a great run. We checked all the major boxes off, like I’ve said. Certainly some got away at times.

“It’s definitely great to see where INDYCAR is headed with this group up onstage, what they have coming over the years to come, all the interest in INDYCAR.

“I was coming up in karting right when I got to the first car, when I sat in my first car, the split happened. Man, that was a long recovery back. I’ve been in the trenches the whole way.

“To see it where it is now is absolutely fantastic. To compete up at the front for a race win here this weekend is really what I’m here for. It’s the only thing that matters.”

In now comes Romain Grosjean. The ex-F1 driver is having the time of his life here in the series and with the comfort and safety of these cars now, he and his family felt it was okay for him to now run on the high speed ovals too.

That means Texas and Indianapolis are open to him. See, they were prior to his frightening crash late last year in Bahrain. After that, he and his family felt it was best he just runs the road and street courses over here instead.

After doing so for a while, the World Wide Technology Raceway opened up as an option. He tested there this summer and raced this past August in starting 15th while finishing 14th. That wasn’t indicative on how aggressive he was in that race and how fun he really had.

That performance Michael Andretti said stood out to him as an option to pursue the Swiss born Frenchman for a potential seat for 2022.

Grosjean, being open to all tracks now, made a lot of sense for Andretti to court. Andretti Autosport having won 67 times in the series was an intriguing place for Grosjean to listen to. With the sponsor staying put, the funding made dollars and cents for Andretti to make the offer.

Grosjean, obliged to hear him out.

That led to this announcement. Grosjean, will pilot the DHL sponsored No. 28 Honda in 2022. In fact, he’ll do so for at least two years with the agreement being through the 2023 season.

Grosjean, has one pole, three podiums, four top fives, six top 10’s and 53 laps led in 12 starts this season. By comparison, Alex Palou, the current points leader, had no poles, one podium, one top five, three top 10’s and one lap led in this same car last year.

If you want to compare Hunter-Reay’s stats this year to Grosjean, the 2014 series champion has no poles, no podiums, one top five, three top 10’s and only four laps led.

It’s a no brainer.

“We are thrilled to welcome Romain to the Andretti Autosport family,” said Andretti, CEO and Chairman, Andretti Autosport. “He already had an impressive resume before coming to INDYCAR and watching what he’s been able to do in his rookie season here has been exciting to say the least. His vast motorsport experience will be beneficial to the team alongside our already strong 2022 driver lineup. We also couldn’t be more excited to continue our strong partnership with DHL. The DHL sponsorship is one of the longest and most successful in the paddock and we look forward to continued success on and off the track.”

DHL, headquartered in southern Florida, first appeared as a partner with the Andretti Autosport team in 2011 as a co-primary sponsor on the 28-car, growing to be the full primary starting in 2014. During their decorated tenure in the NTT INDYCAR SERIES, DHL has been a part of an Indianapolis 500 win, an NTT INDYCAR SERIES Champion, 14 wins and 39 podiums.

“We couldn’t be happier to continue our successful partnership with Andretti Autosport, which has provided us with one of our most powerful avenues for connecting people to our global brand,” said Mike Parra, CEO of DHL Express Americas. “The legendary Andretti organization is run by a winning team whose members we have long considered part of our DHL family, and now we are excited to also welcome their newest driver, Romain Grosjean, to our family. We are thrilled to have such a highly regarded international competitor taking the wheel to represent DHL, and we look forward to a fruitful partnership with Romain and the entire Andretti team, both on and off the track.”

That South Florida headquarter isn’t irrelevant either. Grosjean, after spending six weeks with his family in an RV will keep them here in the United States. They’ll move to the Miami area now where his kids will go to a French school.

That’s how much of an impact America has had on he and his family. They came and don’t want to go back.

Grosjean officially made his move from Formula One, where he spent nine seasons, to the NTT INDYCAR SERIES in 2021. The 35-year-old began his racing career at the age of 14 in multiple international karting championships before collecting numerous championship titles and race wins as he ascended Europe’s ultra-competitive open-wheel racing ladder. Before making the switch to the NTT INDYCAR SERIES, Grosjean recorded 10 podium-finishes, twice finishing a career-best second, and finished as high as seventh in the Formula One Championship standings. Grosjean has made quite the splash in his first year of American open-wheel racing, recording one pole, three podiums, four top-five finishes, leading over 50 laps and making his oval debut.

“I’m delighted to be joining Andretti Autosport and driving the No. 28 DHL Honda for next season,” said Grosjean. “It’s a big honor to be joining such a great team as Andretti, anyone in the motorsport world knows the name Andretti. I’m super happy and proud to be racing with the team. I’m also very proud to be representing with DHL. I’ve known the DHL color on racing cars for a very long time. I couldn’t be more proud to represent such a great company in INDYCAR. I’m hoping that we are going to be very successful together, which is our aim on every side. I would like also to thank Dale Coyne Racing for giving me the opportunity to join INDYCAR. I’ve enjoyed the racing so much and it’s given me the change today to be racing with one of the most competitive and best teams in the world.”

He will make his Andretti debut on Oct. 8 for the tire test at the Indianapolis Motor Speedway. It will be his first time on the 2.5-mile oval as the series will allow him to complete his rookie orientation that day.